Senators leave for Olympic break early, lose 7-2 in their own absence

Wait, they did actually show up? I don't believe you.

Share All sharing options for: Senators leave for Olympic break early, lose 7-2 in their own absence

It was certainly a slow start to the game. Like a Friday afternoon before a long weekend slow. The first 10 minutes featured a fair bit of back and forth, with not much in the way of scoring chances for either team.

Just past the 10 minute mark, Erik Condra tripped up Reilly Smith and was sent to the box. The Senators penalty kill was looking pretty good. Boston was unable to set up any zone presence, Ottawa was clearing the puck almost as soon as the Bruins rushed in. So of course, on only the second rush that resulted in a shot attempt, Patrice Bergeron took a feed from Carl Soderberg and puts it over the pad of Anderson for a 1-0 lead.

Clarke MacArthur had a chance to even up the score shortly after, but rung the puck off the post instead.

Late in the first, David Warsofsky fed the puck past Patrick Wiercioch to a rushing Chris Kelly, who tipped it past Craig Anderson for the 2-0 lead.

Zack Smith, knowing his team needed a spark, did what must have seemed like a good idea at the time - get completely pasted in a fight against Kevan Miller.

A late hooking call against Chris Kelly resulted in some chances for Ottawa, but nothing making it past Chad Johnson before the buzzer sounded.

Early in the second, Bergeron outwaited Anderson (who committed way too early), skated around Karlsson (who basically watched it happen) and made it 3-0 Boston.

Late in the second, Bobby Ryan finally got the monkey off his back by threading the puck through the five-hole of Chad Johnson with a beautful snipe.

The 2 goal difference wouldn't last long. Barely a minute later, Jared Cowen would get drawn out to the point in the Ottawa zone. Meanwhile, the puck was in the opposite corner of the zone, on the stick of David Krejci. Krejci wasn't Cowen's man to cover though - Jarome Iginla was. Iginla, who was standing all alone right in front of the netlong enough to get through at least one verse of "All By Myself". Krejci fed Iginla, who tipped it right past Anderson for a 4-1 lead.

But hey, third period, right before the Olympic break, with a big lead. Maybe the Bruins would let off the gas, and Ottawa might be able to get back in to this game!

A stretch of sustained pressure from the Bruins lead to a turnover from Jared Cowen. That turnover ended up in front of the net on the stick of Jarome Iginla, who had plenty of options. He opted to pass it to Milan Lucic, and Lucic opted to put the puck in the net.

Anderson got the mercy pull, and Robin Lehner hit the ice.

Shortly after, it was announced that MacArthur had left the game with an injury to his right foot. While there's never exactly a good time for an injury, in the third period of a lost cause, right before a two week break is about as close to good as it gets.

The pain wasn't over. Brad Marchand made it 6-1 on yet another Bruins rush when Cowen failed to control Reilly Smith, and Karlsson failed to contain Marchand.

In possibly the lone positive in the third period, Patrick Wiercioch would pad the stat line by threading a shot past Johnny Boychuk, Chris Neil and Chad Johnson on the power play. Johnson never even saw the shot.

The Bruins added extra icing to their cake. A short clearing attempt was be dumped back in by Marchand. Reilly Smith danced around Jared Cowen, fed the puck to Carl Soderberg who danced around Erik Condra and put the puck over Lehner's far shoulder for the final goal of the game.

The final buzzer sounded, mercifully ending what was probably the worst game of the season.

The PK did a very good job of limiting the Bruins chances this afternoon. The Bruins acually looked more dominant at 5 on 5. Unfortunately, the goal off of one of those limited chances keeps the PK from hero status.

Only real sustained offensive pressure Ottawa was able to generate, and went 1 for 3. Might be benefitting from it being a slow day for positives.

Every goal against came with a defensive lapse.

Anderson didn't lose the game for us, but he didn't do a whole lot to help win it either.

The first goal he needed to get, and the third he was easily as culpable as the defense. I can forgive the second goal - no support, and the shot could come from either side. Same for the fifth. The fourth goal, it was Iginla alone. Those three save him from zero status, but he probably should have had at least one of them.

Both goals against him were stoppable, and two goals on nine shots is just terrible. But then, the game was a lost cause when he came in so I can't blame him if his focus was off. His performance not actually mattering saves him from zero status.

He was on the ice for six of the seven goals against. He did his job on the third goal against by tieing up Reilly Smith on the back door. But the first, fourth, fifth, sixth and seventh goals against were all ones that he shares the blame on by either making a mistake or just not being that effective.

Why not negative two, or worse? We need room to grow, gentle readers.

Hero: Any Sens fan who sat through the entire game when they didn't have to

I only watched the whole thing because I was writing this recap.

WARNING: The following images may be disturbing to some viewers 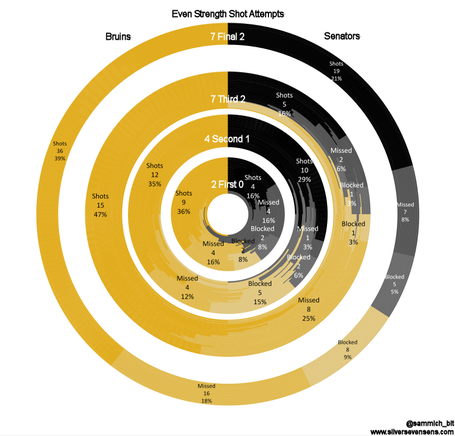