Senators eke out 3-2 win over Sabres

It was another one-goal game between these two teams. Anyone surprised?

Share All sharing options for: Senators eke out 3-2 win over Sabres

It's another short recap tonight, so let's get to it.

First period: Nothing of note. The Senators came in hot, but slowly faded and succumbed to penalty trouble to end the period. One would have thought it was Ottawa, and not Buffalo, who had played the night before.

Second period: Erik Karlsson is so good. Stephane Da Costa weaves away from a few checks to find some open ice, but surprise! Erik Karlsson is in that open ice. Passing to Karlsson remains a good decision for all of his linemates as he just embarrasses Sabres goalie Jhonas Enroth with a bad-angle wrister.

Third period: Off of the opening faceoff, a fortuitous bounce off of a linesman's skate creates a 2-on-1 for Jason Spezza and Milan Michalek. All Michalek has to do is keep his stick on the ice and Spezza does the rest. Just like that it's a 2-0 lead against the worst team in the league, a team that should be tired, and with nothing to play for, pack it in... right? The Senators go on cruise control, much like in the first period, and take the period's only penalties. The Sabres' power play does not convert--though they come close--but the constant penalty-killing has no positive effects for the Senators. First, Tyler Ennis absolutely buries a rebound into an open net, and then, with less than five minutes remaining, an undercover Drew Stafford is able to pounce on another rebound and maneuver around a down-and-out Craig Anderson to tie the game at two.

It looked like Ottawa was going to blow it, and perhaps settle for a lone point on a night when their competition were all winning, but with 23 seconds left, Jason Spezza decided to take matters into his own hands. Spezza took on four Sabres defenders (because who's going to stick around to cover Chris Neil when the game is on the line?) and in doing so, created open space for Michalek. Spezza was able to feed Michalek before the defenders could react, and just like that, the game winner was scored.

It wasn't that easy, of course. Erik Condra took a ugly tripping penalty with 16 seconds left to create a 6-on-4 situation for the Sabres, but they were unable to score before time ran out. If this game had lasted five minutes longer, the outcome might have been different.

It's a little hard to believe that this was the same team that took down the St. Louis Blues--the Boston Bruins couldn't do that tonight--but the core remains the same: They could have decided they were down and out, but instead found a way to win the game. Would you like to see them dominate a weaker opponent? Sure, no doubt. But hockey is hard, because the other guy wants to win, too, and the skill gap is not so wide that mistakes don't cost you--and Ottawa made plenty of those. In lieu of domination, the overcoming of adversity is a very satisfying consolation prize.

They're going to beat Boston.

Even though Spezza has a clique thing going on with Erik Karlsson (watch the two of them talk on the power play and ignore the other three players!) right now he can do no wrong. It seems like every Spezza pass is finding the right stick, and that's huge for the team--and for Michalek, who desperately needs to get going if the team is going to show the depth to beat top teams. The difference in Michalek's goal reactions from the first ("Yes"... the same as his reaction to his goal against St. Louis) to the second (inarticulate bellowing) makes it seem like he might be getting some confidence back.

Karlsson you just don't want to name a hero too often because it looks like homerism, but the guy's talent is undeniable, and his game continues to round out. In addition to the goal, Karlsson had three hits on the night--same as fellow hero Gryba--and at one point led three straight rushes up center ice. Tempting Karlsson with open ice in the middle of the rink is like hopping the wall at the zoo because you want to give a panda bear a hug: You deserve what happens next.

Didn't see a lot of ice time in this one, and was less noticeable as the game went on, but was still good enough to find Erik Karlsson in a place where you wouldn't expect a defenseman to be when you're headed away from your opponent's net and one poke check away from a game-changing turnover. That's vision.

Made things harder than they had to be for his teammates.

CowenWatch 2014: In a bizarro world moment, seconds after Karlsson throws a big hit, Cowen comes flying up the ice with speed to lead a rush with the puck. He was also knocked on his ass while balancing on his heels. The result? He got up and absolutely buried the guy in revenge. Cowen needs to play like that more often. He remains a mixed bag , which makes Karlsson the right partner for him.

A full 60 minutes like they started the game and the result would be as one-sided as you could ask for. But it faded. A full 60 minutes like they played after Karlsson scored and you'd be looking over at some stranger nodding like you were bros. But it faded. A shift like Spezza's from some of his teammates and the outcome is never in doubt. But we had to sweat it out until the final horn. It's those little things--the attention to detail when it's not absolutely crucial--that continue to elude this young team on a consistent basis. We've seen what they can be when they're on. They're just not always on. 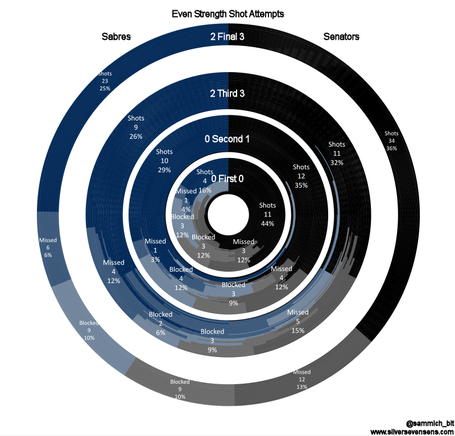 Not available yet, so just use your mind's eye.