Senators lose 2-1 in overtime to Penguins

All told, a point is a pretty good outcome.

Share All sharing options for: Senators lose 2-1 in overtime to Penguins

So much to talk about in this game, and yet, so little. But it's late and I'm tired, so here's the shortest recap ever:

First Period: Stephane Da Costa busts out a great individual effort by doing what I believe the Olympics call a "short routine" before working his way to open ice to rip a shot past Marc-Andre Fleury. The lead would be short-lived as Z. Smith was called for an... interesting boarding penalty on Evgeni Malkin and on the ensuing power play Brian Gibbons redirected a puck past a helpless Craig Anderson.

Second Period: Pittsburgh took 16 shots but none beat Anderson. For a brief shift, it was a shooting gallery, but outside of that, nothing of note happened.

Third Period: Ottawa has an early power play snuffed out by a soft interference call on Kyle Turris. Erik Karlsson has what can only be described as a glorious chance to put the Senators up 2-1 completely stolen by Fleury.

Overtime: After an ugly turnover in their own end, James Neal is able to outwait Marc Methot to shoot the puck into an empty net. Crap.

Ultimately, the story here will be written that the Senators managed to earn a point in a game where they shouldn't have gotten any thanks to Craig Anderson, but really, this is the kind of play we saw regularly from Anderson last year. Despite the shot count, Ottawa played well enough to get a win had things gone a little differently. Pittsburgh relied almost entirely on Malkin and Sidney Crosby--who had just one secondary assist between the two of them--to generate any kind of sustained offense. That kind of defensive effort from the Senators should have been good enough for a win, and if not for a brilliant Fleury save, Ottawa would have left Pittsburgh with a 2-1 regulation win. There's plenty to be positive about despite the optics from the stat sheet on this one.

Pittsburgh's home record: The Penguins have a great home record. It's because their ice must be the worst in the league. The puck bounced all over the place repeatedly, making for a ragged game overall, and creating numerous turnovers simply because it hopped over sticks.

Officiating: Suffice it to say that I would have called this game differently than the referees did. The frustrating part is that watching Crosby complain to the officials about what was not called, it was easy to agree that he had a case--it's what was called that was so mystifying. It's hard to imagine either team feels good about the officiating in this game, but it stings more coming off of the blown call Ottawa got in Toronto on Saturday.

Bro was on. An outstanding game from Da Costa in all phases.

Likewise, I think this may have been the single best game Gryba has ever played in a Sens jersey. No way he should come out of the lineup right now. If he plays like this every night, some other player can give up his spot. Maybe it's playing a simple game with partner Marc Methot. Maybe it's just a peak before some coming valleys. Or maybe it's just a reminder that development doesn't stop at a set age, and improvement doesn't come in smooth, predictable curves.

Simply put, Anderson needed to have this game. After soft performances in his last two outings, and some criticism over his comments after the Toronto game, Anderson needed to deliver something similar to what got the Sens to sign him to contract extension. They had no chance of beating the Penguins without getting top echelon goaltending, and that's what Anderson delivered for them. It was a reminder of just how good he can be. It doesn't justify starting him tomorrow in St. Louis, however.

We've now seen Karlsson take on both Alex Ovechkin and Sidney Crosby and hold them off the scoresheet. But remember, Karlsson can't play defense.

Yeah, there was a pretty big flub at the end there, but overall, I thought Greening was one of the team's better forwards. Something about playing Pittsburgh just seems to bring out the best in him. Maybe he needs to have a chippy game to give him something to fight through. Maybe he just matches up against these players well.Who knows? 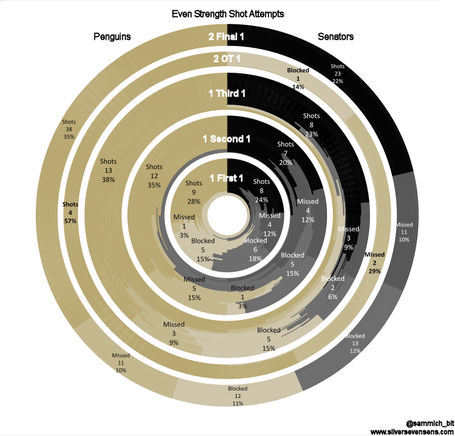