The less said about this one, the better.

Would you believe the better team was on the wrong end of a 6-1 final?

Of course you wouldn't, and that's not what happened in this game... not exactly.

But at the start of this one, Ottawa was the better team. They came out of the gate flying, outshooting Detroit, outworking Detroit, and outplaying Detroit. It was as you'd expect, considering the Senators were the fresher team--the Red Wings had just played the night before. Things culminated with a goal for the Senators from Bobby Ryan.

Except, whoops... Ryan kicked the puck in. Cheater. And he totally did it on purpose and got caught. Oh, well. Intensity.

Unfortunately, things went downhill after that. An unforced turnover by Cody Ceci wound up as a Riley Sheahan goal. A bad pass by Colin Greening and subsequent turnover by Jared Cowen wound up as a Johan Franzen goal just 1:29 later. Not done on the night, Franzen would bury his second of the game on a power play just 1:59 after that.

And that, folks, is how you win a hockey game. Franzen would later add a third for a hat trick, but the Senators team who played the last 45 minutes of this game was not the same team that played the first 15 of it. It was very obvious that the team had used its break well, showing new looks in both its 5-on-5 play and power play setups. They were confident, poised, and attacking.

It's going to leave a bitter taste in everyone's mouth, especially coming off of a 7-2 loss to the Boston Bruins prior to the Olympic break, but I chalk this game up to inexperience. The Senators are still too young to know how to handle knockout blows like the one they took tonight. Bad goal? Sure, they can shake that off and come back and call themselves the Pesky Sens. But this was a whole different beast. This team is a wrecking machine. There aren't many teams that can get blasted for three goals in the span of four minutes and pick up the same pace they were playing with before the event. It wasn't a situation where head coach Paul MacLean could call a timeout to stop the bleeding. It was just a team caught off guard by a few bad plays and not knowing how to respond.

And that's all that needs to be said about this one. 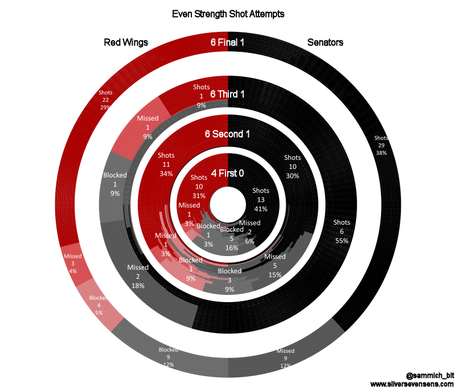 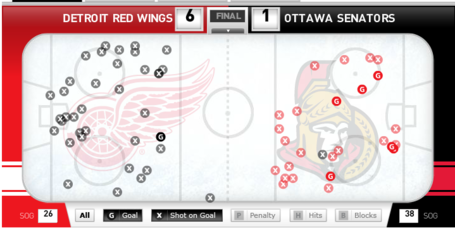 Are not available yet. Probably because they're still looking for some Ottawa highlights.