A recap of the Toronto Maple Leafs 6-3 win over the Ottawa Senators.

Share All sharing options for: Kessel dominates in 6-3 Toronto Maple Leafs win over the Ottawa Senators

The Senators simply are not capable of stopping Phil Kessel. Kessel scored his second career hat trick against Ottawa (I have had the displeasure of watching both in live at the arena), bringing him to 18 goals and 17 assists for 35 points in 25 games against Ottawa since joining the Leafs. He also has 109 shots in those 25 games meaning Ottawa goaltenders have an 83.5 save percentage against Kessel.

The game started well enough for Ottawa with the first few minutes being spent almost entirely in Toronto's zone, even if the Senators didn't create too many chances from it. Unfortunately for the Senators, Cory Conacher took two separate penalties in the second half of the period that eased the pressure on the Leafs. In the final minute of the period, Chris Neil scored a rather weak goal that Jonathan Bernier most likely should have stopped but it was a deserved lead for Ottawa. The Senators weren't done with the penalties unfortunately with Erik Karlsson being called for hooking just 17 seconds after Ottawa had taken the lead. Nevertheless, the Senators ended the period up 1-0.

The Leafs really increased the pressure in the second, and although Colin Greening doubled the lead to 2-0 on a nice 2-on-1 with Chris Neil, Toronto was getting quite a few chances. Thus it was no surprise when Kessel scored his first of the night on a tip-in by escaping Jared Cowen and having an open net to direct the puck into. Shortly after that, the Leafs tied the game after a beautiful pass by Nazem Kadri to Joffrey Lupul, who was left alone in front of the net. I was sitting on the other end of the rink, so I didn't quite see what the delay was after the goal. After realising that Kadri hit Cody Ceci from behind right before the goal, I was rather...unpleased. Incredibly, the referees didn't start the makeup call right away, with the Senators getting the next penalty less than two minutes after the equaliser. Ottawa did escape the period at 2-2, Ceci was not hurt on the play and the Senators had the game there to win.

The third period didn't go well for Ottawa. First Kessel put the Leafs ahead for the first time on a power play goal from the top of the circle that was too quick for Craig Anderson. The Senators tied it 92 seconds later on Chris Neil's second of the night on a play that no Senator on the ice thought went into the net, but the referees deemed to be a goal after the commercial break. Five minutes later, Eric Gryba gave the puck away behind the net to Tyler Bozak and he found Kessel in front of the net and with Craig Anderson not exactly paying attention, it was an easy goal for Kessel to complete the hat trick. Kessel returned the favour to Bozak with under two minutes left to make it 5-3 and Kadri added an empty net goal to complete the scoring on a 6-3 Toronto win.

Sens Hero: Chris Neil
Neil had two goals, an assist bringing him to 10 points on the season. His line with Zack Smith and Greening was easily the best on the night for Ottawa, scoring all three goals, being on the ice for none of the Toronto goals and dominating possession.

Dishonourable mention: Craig Anderson
The only reason this isn't a zero is that there were some awful defensive breakdowns in front of Anderson (which he once again pointed out by the way). The Senators needed a few more saves from Anderson tonight, even if they were difficult ones. Too many times this season, Anderson has chosen to pass the blame on his performance.

Sens Killer: Phil Kessel
The Senators can't stop him. He is pretty good at ice hockey. 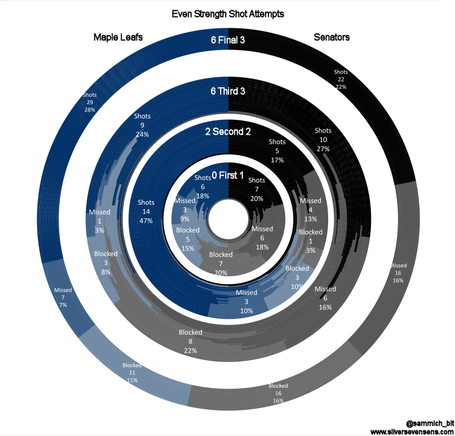