A preview of the game between the Ottawa Senators and Toronto Maple Leafs on 1 February 2014.

The Ottawa Senators stayed in a playoff spot for only one night but they have a chance to move back in with a win tonight in Toronto against the Maple Leafs. The Senators have played the Maple Leafs twice so far this season, losing both games in a shootout.

There will be one change to the lineup with Matt Kassian coming in for Stéphane Da Costa, because MacLean gonna MacLean. Craig Anderson will get the start again. Here are the lines.

Some notes for tonight:

This graph from ExtraSkater shows how the Senators have improved their 5-on-5 Fenwick close from the start of December. The team is certainly trending in the right direction. Ottawa has been around a 52% Fenwick team for the last two months, which is pretty good. 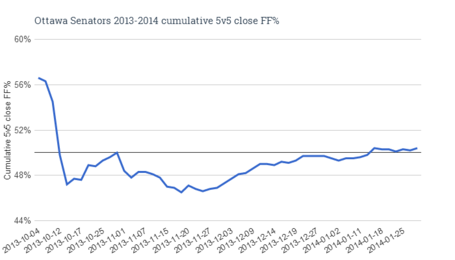 Here are some stats leaders for the two teams tonight.