A look at the correlation between spending and winning in the NHL.

Share All sharing options for: The Myth of Cost-Per-Point

You know what? Any idiot can go spend money. There are so many idiots out there that spend to the cap every year – take a look at where they are. It all comes down to cost per point. That’s the only stat I care about – cost per point.

This quote has come to embody the current era of the Sens. Melnyk took over the team in 2003, at a time when the team was competitive but bankrupt. He was mostly seen as a hero for having kept the team in Ottawa. In the last few seasons, Melnyk's tone has changed, imposing internal budgets, bemoaning the difficulty of Ottawa as an NHL market, and continually contradicting himself in terms of the team's finances.

However, many agree with that above quote. After all, it's easy to look at teams like the Maple Leafs, Lightning, or Flyers of recent years, who spend to the salary cap, and even find ways to circumvent it, and have very little recent success to show for it. Teams overpay for players like David Clarkson or Andrew MacDonald or Ilya Bryzgalov, and the cheapskate Sens rejoice because they're not caught in long-term handcuffing contracts.

The problem is, I think Melnyk's quote is only half of the truth. The idea that "spending doesn't guarantee you a championship" is true. But the other half is that not spending guarantees you won't win championships. Not all of the big spenders are winners, but every winner is a big spender. This was an idea I had a little over a year ago as a commenter on Silver Seven Sens, and here's the quick graph I put together then: 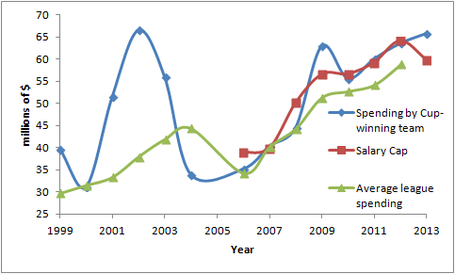 The first thing you can see from the graph is the massive spike in spending right before the lockout, as Cup-winning teams like the Red Wings and especially the Avalanche pretty well bought championship teams. The post-lockout years brought a few years of a league-average team winning the Cup, but the winning teams creep back above average spending by 2009 and stay there. The notable exceptions:

- 2000 New Jersey Devils: This was their second Cup as a franchise, with a bunch of players still proving themselves. By three years later, the next time they won the Cup, they were well ahead of league-average spending.

- 2004 Tampa Bay Lightning: This is an even more obvious example of the phenomenon seen above with the Devils. The Lightning won with a whole bunch of players on entry-level contracts, or still proving themselves in the league. The cap crunch that came from extending their stars led to them losing Brad Richards, Dan Boyle, and Nikolai Khabibulin, choosing to hold onto Vincent Lecavelier and Martin St. Louis.

- 2006, 2007, 2008: Immediately following the lockout, the disparity between the highest and lowest payrolls was quite low. This meant that for three years, the lockout actually succeeded in minimizing the effect of money in winning the Stanley Cup. However, from 2009 until the present, the money gap has again reared its head.

I found this high-level examination quite interesting, and used it in arguments when "cost-per-point" came up. The graph above showed there were only two real ways to win: spending to the cap, or having a bunch of great players on ELCs. Not every team that spent to the cap won the Cup, but no team who was significantly below the cap could win the Cup. At the very least, these findings demanded a more serious look into the data. Below is a much more extensive look.

(Notes on data collection: Numbers from 1998-2008 are obtained from Wikipedia article "List of team payrolls in the NHL", with most numbers sourced from the USA Today Salary Database. Numbers from 2009-2015 are obtained from CapGeek.com. Lack of available information for the 2008-09 season led to an estimation using numbers obtained from CapGeek.com, but 2008-09 numbers are inaccurate as they do not reflect information such as injury-reserve cap relief, and whether a player was a healthy-scratch at the NHL- or AHL-level. As this is only for one year, it is expected that the inaccuracy will not drastically affect the overall results. Additionally, due to the use of two sources of data, data for earlier than 2008-09 are listed as actual dollar figures, while data from 2008-09 to the present are listed as cap hits.)

The first graph below shows the payroll of all the teams in the league, with three lines emphasized: league-average spending, the salary cap (once it came into existence), and the Senators payroll. 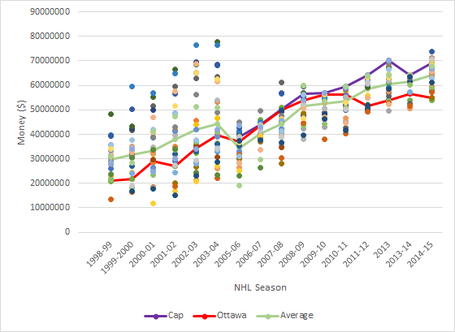 The first thing that jumps out at me on this graph is how successful the lockout has been in creating payroll parity. A look at the few years before the 2004-05 lockout shows that the spending spread was getting out of control. All of the years since the lockout show a much tighter cluster. The next noticeable trend is that league spending has been steadily increasing, with the single exception of a drop caused by the full-season lockout. The rate of change also does not seem to have changed. Average spending is already well above pre-lockout average spending, and will continue to grow at a significant rate for the foreseeable future.

As for the Senators, there are three clear eras: 1998 until the 2003-04 lockout; 2005-2011; and 2011-present. In the first era, the Senators were a competitive team with significant regular season success, all on a budget well below league-average. In the middle era, the Sens were right near the salary cap, spending above league-average. The Sens' spending actually dropped from 2003-04 to 2005-06, it's just that league-wide spending dropped drastically to accommodate the new salary cap. Over this period, the Sens' cap hit grew proportionally to the salary cap, and the team was a contender until the tail-end, when they started overpaying players such as Alex Kovalev in a last-ditch effort to maintain contender status. This era also saw the only time the modern Senators reached the Stanley Cup Finals, losing to the Anaheim Ducks in 2007. The final era marks the beginning of "Senate Reform", a time in which the Senators started to rebuild the franchise, trading players for draft picks, and shedding salary in the hopes of returning to contender status in three years. This era saw the Senators drop well below league-average spending, maintaining a fairly constant team cap hit even as the salary floor has been rising. 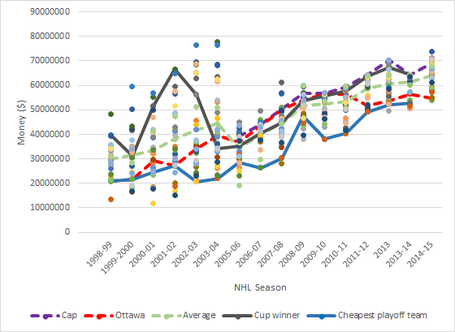 This graph reinforces what the high-level examination showed: with a few explainable exceptions, the team that wins the Cup is spending more than the average. The last six Cup winners have all spent to within 5.2% of the salary cap. Ottawa's departure from contender status has more-or-less coincided with the drop below league-average spending. This is likely a cause-and-effect scenario: the Senators had a couple of years of spending lots even after they were no longer in the upper echelon of teams, so Melnyk decided to drop the team payroll. This makes financial sense, given that if the team is unlikely to make the playoffs anyway, spending according to a budget means that the team will turn a larger profit.

It's clear that a team can make the playoffs on a budget. However, these teams rarely make noise in the playoffs. The last two playoff seasons for the Sens have seen them qualify in the last and second-last spots available in the Eastern Conference. The Sens even won their first round matchup with the Canadiens in 2013, before being woefully outmatched by the Penguins in the second round. I think this is the best-case scenario we can expect from a budget-restricted team: make the playoffs, maybe even get lucky and win a series, but never be able to seriously compete with the class of the league. (Based on all the talk by Murray and Melnyk recently about this team being "a playoff team", making the playoffs may be the only goal for management anyway.)

Now I'm not saying that spending money will bring championships to Ottawa. Paying Marc Methot $5.5-million per season isn't going to magically turn this team into a contender - he's still Marc Methot. Same way that overpaying for Scott Gomez, Wade Redden, or Bobby Holik has failed to create champions in the past. You still have to be smart about spending money. Contracts belonging to Kyle Turris or Erik Karlsson are fantastic for this team. However, one problem with bargain hunting is that you make mistakes as often as you succeed - for every Turris, there's a Colin Greening; for every Karlsson, there's a Mark Borowiecki. The other problem concerning the Sens is that the savings from bargain contracts need to be exploited. The excess cap space needs to be used to buy other useful players if this team is ever going to compete for the Cup. Some great players are available on favourable contracts, but the best teams in the league don't hide from paying their stars what they're worth when necessary. Patrick Kane on a $3-million contract would be amazing, but the Blackhawks didn't shy away from signing him to a $10.5-million-per-season extension because his cost-per-point would drop. Last season, Erik Condra had a better point-per-cap hit than Erik Karlsson (12.8 per million dollars to 11.4), but you don't win anything with a team of Condras. Sometimes, you need to pay top dollar for proven talent.

For better or for worse, the Senators are a budget team and will be for a while. The last fifteen years' worth of NHL history shows that this team won't have a shot at the Stanley Cup, unless all of the youth hit their peaks at the same time. At best, we can hope for playoff appearances and the odd series win. At worst, we'll be deciding whether or not it's worth watching a Sens-less playoffs yet again.

This is the myth of "cost-per-point". It's not that money shouldn't be invested in players judiciously, it's that there is no substitute for money when it comes to winning championships. No budget team will win the Stanley Cup by following a "cost-per-point" strategy. Making the playoffs is not an adequate long-term goal for a franchise, but it seems to be the current aim of the Sens. Uncle Euge seems to have been selling this idea that our team is somehow smarter than the rich teams out there, and eventually we'll see it turn into success. I've seen the numbers, and I'm no longer buying it.