The story going into tonight's game was former Senators goalie and current Vezina Trophy candidate Ben Bishop's return to Kanata. Unfortunately, that narrative would be short-lived. The game started brightly for Ottawa, when the Sens scored less than two minutes into the game. The play started when Sens captain Jason Spezza gained his own blue line and whipped a backhand pass just out of the reach of a streaking Mika Zibanejad. Zibanejad skated hard to retrieve the puck in Tampa's zone when Bishop made an ill-advised diving poke check. The Tampa netminder was never going to beat the speeding Zibanejad to the puck, and as Mika quickly stickhandled around Bishop, a diving Nikita Kucherov accidently clipped Bishop in the head. Bishop stayed down and Marc Methot slapped the puck into a wide open net. Bishop exited after receiving medical attention and did not return.

With Lindback coming into the game cold, Ottawa tried to take advantage of the goalie early during the team's first power play, drawn by Spezza. Despite some good pressure and a few solid scorning opportunities, Ottawa was unable to add to the one-goal lead. Ottawa maintained pressure as the game returned to even strength, but couldn't connect on a good chance by Kyle Turris and Bobby Ryan. Midway through the first period, a Cody Ceci penalty gave Tampa its first power play of the game. Ottawa killed the penalty easily and the second half of the period was more even than the first. However, the Sens still had the better chances and probably would have been a little disappointed to enter the period up by just one. Fortunately, the Sens were about to add a late marker with a beauty from Karlsson less than 30 seconds before the buzzer. It started with a nice breakout pass from Milan Michalek to Spezza. Spezza gained the offensive zone and using Zibanejad as a decoy in front of the net Spezza entered the slot. Stepping around a Lightning defender, he then slid a pass to an open Erik Karlsson at the side of the net. Karlsson showed great patience waiting for Mark Barberio to drop to his knees before wristing the puck top shelf into an open net.

The second period didn't get off to a great start, as Tampa registered its first goal of the game a little over three minutes into the period when broken defensive coverage led to Alex Killorn being wide open in the slot. His wrist shot was deflected past Craig Anderson, putting Tampa within one. A few minutes later, Ottawa restored its two-goal cushion when Jared Cowen pinched to keep the puck in the offensive zone. Cowen's rush ended when he skated into the official, but fortunately for the Sens, Tampa defender Radko Gudas turned the puck over right in front of his net soon after Cowen lost possession. Zack Smith snapped up the giveaway, skated into the slot, turned, and ripped the puck top corner for the Sens third goal. The Senators added a fourth goal near the end of the period. Bobby Ryan was set-up just outside the Tampa blueline. He broke into the Bolts zone but as he moved to the slot he couldn't quite break free from the Tampa back check. With his January goal slump weighing on him, Ryan made a really smart and unselfish play here. Rather than force a weak shot on net, he made a physically strong play; spinning off the defender and feeding Kyle Turris with a backhand pass. Turris made no mistake and deposited a wrist shot behind Lindback. Ottawa went into the second intermission up 4-1.

The third period began with consistent Ottawa pressure. On a breakaway chance, Spezza almost slid the puck past Lindback. A few minutes later Turris and Ryan had a 2-on-1 that was another great opportunity. Driving hard for the rebound, Ryan took a weak goalie interference penalty. Down a man, Ottawa maintained pressure on Tampa and the Sens had several chances shorthanded. Shortly after his penalty ended, Ryan joined line mates Clarke MacArthur and Turris in the Tampa end and after some nice passing from the trio, Ottawa netted its fifth goal of the game. From the corner, Turris fed Ryan in the slot, and the winger put home his 20th goal of the season on a snap shot. A Tampa penalty in the second half of the third led to more solid pressure but MacArthur was stripped of the puck in the neutral zone and Tampa's Tyler Johnson broke in alone on Andy, depositing his 17th goal of the season behind the Sens netminder. Ottawa continued its lacklustre play in the defensive zone and Victor Hedman was able to add a late goal. Despite the late Lightning flashes, this one was never in doubt. 5-3 Ottawa wins. Shots 38-28 in favour of Tampa Bay.

Spezza looked great throughout the game. On Ottawa's first goal (Spezza's first assist), Mika Zibanejad's playmaking skills were on full display. However, Ottawa's second goal illustrated some highlight-reel playmaking ability from the Sens captain. Yes, he still has the occasional defensive lapse (like the blown coverage on the Killorn goal) but he had great chemistry with Erik Karlsson all night and the duo had several dangerous scoring chances.

Soon the conversation won't be about Karlsson's return to full strength after his Achilles injury. Soon the most frequent Karlsson conversation is going to be: is he better than before he went down? Karlsson looked great again tonight. He had several scoring chances and generated a lot of offensive opportunities with Spezza.

Ryan's played decent hockey in January, but the goals just haven't come for the sniper since his Olympic snub. It's seemed like he's been pressing in the last couple of games as well, trying to bust out of his goal slump. Tonight, he was great, especially in the second and third periods. He made the unselfish play on a partial break at the end of the second period by passing to Turris. It was also the smart play, as a shot would have been the low percentage play. The goal and the timing of the goal put the game out of reach for Tampa. In addition, he scored his 20th goal of the season. Hopefully he can get on a roll.

Like his line mate and captain, Michalek has also had a difficult year. But he's looked better of late and that trend continued against Tampa. He had a couple of scoring chances and a great breakout assist on Karlsson's goal.

Smith has been one of Paul MacLean's most reliable bottom six forwards all season. He reached double digits in goals for the season with his second period snipe. It's the kind of bottom six production teams crave and considering he's often saddled with Ottawa's least productive forwards as his line mates, it's impressive.

Parts of Ottawa's defensive lapses in the third period were due to the fact that the game was 5-1 and Ottawa took its foot of the gas. Score effects resulted in Ottawa taking just six shots in the third period and Tampa peppering Anderson with 23. Part of it was coverage breakdowns (Greening, Neil on the third goal). Part of it was a goal or two that Andy might want back. The end result was an absolutely dominant 50 minute performance marred by 10 minutes of mistakes which have become customary this season.

For the second game in a row, Ottawa failed to record an empty-net marker. Like last game, it was sort of comical. Spezza and Michalek both missed. At one point the puck was even given to Erik Condra. It didn't matter in this game, but Ottawa's failure to convert is just another symptom of not closing games out efficiently.

Both Bishop (head) and Filppula (lower body) left the game with injuries and didn't return. Hopefully, Bishop, who lay unmoving on the ice for a few minutes and looked shaken as he skated off didn't sustain a serious head injury. 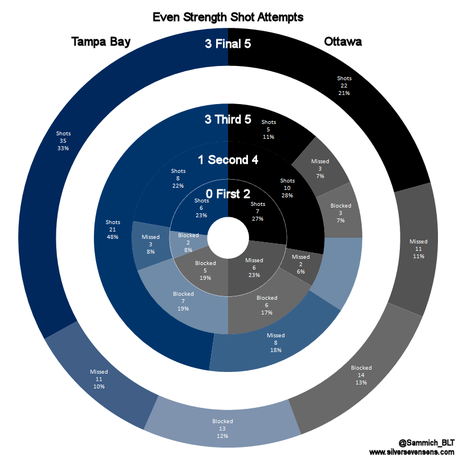