Stephane Da Costa scored a pair of goals as the Ottawa Senators prevailed 3-2 in Columbus.

Be honest; the day the 2013-2014 NHL schedule came out, you probably didn't circle the January 28th game between Ottawa and Columbus to be a "big game".  But hey, you also probably wouldn't have predicted that at this point Captain Jason Spezza would be centring the third line between whatever two yutzes Paul MacLean would throw him this game.  Let's face it, this really hasn't been the season most of us thought it would be.

Nevertheless, odd as it may seem, this was a big game.  Both teams are part of the massive clusterfunk of ten teams competing for a chance to get drilled by the Penguins in the first round.  Both teams needed a regulation win. The Senators got one.  Here's how it happened.

Though they were on the road, the Senators came out fast and dominated the opening five minutes.  The run of play hardly left the Columbus zone, and it was no surprise when Ottawa was awarded the first powerplay of the game.

It was, however, a considerable surprise when Stephane Da Costa: (a) showed up on the second powerplay unit; and (b) scored a powerplay goal by banging in a rebound.  It was Da Costa's first marker of the season, and it was well timed for both the player and the team, both of whom have been flirting with irrelevance.

Comfortable with a seemingly insurmountable 1-0 lead, Ottawa tried to settle in and protect that lead for the rest of the game.  The results were predictable: as the Sens eased off the gas, the Blue Jackets started to kick things into gear.

By the end of the period, Columbus had the edge in shots and Ottawa was looking forward to starting the second period trying to kill the second of two consecutive penalties.

The Blue Jackets' strong play continued at the outset of the second period, but they were unable to sneak anything past a very confident-looking Craig Anderson.  I was going to write more about the hockey, but then:

As I pondered this inane, vaguely hilarious nonsense and questioned the life choices that had led me to hearing it, lightning struck again.  Third line centre Jason Spezza found, er, fourth line centre (?) Stephane Da Costa streaking to the net, and the diminutive Frenchman buried Spezza's clever pass for his second tally of the game (and season!) to put the Sens ahead 2-0.

However, after taking the most dangerous lead in hockey, the Senators were (very predictably) again guilty of taking their collective foot off the proverbial gas.  Jason Spezza took a penalty to cap several minutes of strong offensive play from Columbus, and on the ensuing powerplay Cam Atkinson buried a sweet "between the legs" feed from Matt Calvert to cut the Ottawa lead to one.

The rest of the period passed by relatively uneventfully, with the most notable play involving Clarke MacArthur blazing in from offscreen on a backcheck to break up a two on one and help preserve Ottawa's slim and probably undeserved lead.  Note: Clarke MacArthur is awesome.

It was never going to last, was it?  After an ill-advised offensive-zone penalty by Zack Smith, the Senators' penalty kill was a bit overenthusiastic in pursuing the puck.  This led to James "Copy-Paste" Wisniewski  getting the opportunity to step up and lean into a slap shot that Craig Anderson never had a chance to stop.

And then hey, another offensive-zone penalty by Zack Smith!  This one didn't lead to a powerplay goal, but two in five minutes is worthy of comment.  More to follow in the "zeroes" section below!

Fortunately, as he so often does, Erik Karlsson provided the turning point a few minutes later with a nifty bit of skating on the blue line to draw a tripping call.  Jason Spezza slapped home a rebound on the powerplay, and suddenly the Sens found themselves up a goal with a few minutes left.

Chaos followed.  Columbus pushed back hard in search of an equalizer, but couldn't find a way to get the puck past Craig Anderson and the five Senators lying behind him in the net.  The game then ended with Bobby Ryan, Clarke MacArthur, Kyle Turris, and Jared Cowen each taking turns mocking Erik Condra by pretending not to be able to score into an empty net.

It wasn't pretty, but I'll take it.

No one saw this two-goal outburst coming.  I was humbled in my skepticism, and reminded of the words of fictional restaurant critic Anton Ego in Ratatouille:

Last night, I experienced something new: an extraordinary meal from a singularly unexpected source. To say that both the meal and its maker have challenged my preconceptions about fine cooking is a gross understatement. They have rocked me to my core. In the past, I have made no secret of my disdain for Chef Gusteau's famous motto, "Anyone can cook." But I realize, only now do I truly understand what he meant. Not everyone can become a great artist; but a great artist *can* come from *anywhere*. It is difficult to imagine more humble origins than those of the genius now cooking at Gusteau's, who is, in this critic's opinion, nothing less than the finest chef in France. I will be returning to Gusteau's soon, hungry for more.

DaCostatouille!  Or maybe not, but I'm glad the kid had his big night.  I hereby declare that this forgettable win shall hereinafter forever be known as "The Da Costa Game".

The captain's fingerprints were all over this victory.  Spezza provided the set-up on Da Costa's second goal and put in the winner himself.  He's been looking better lately.  Durst we hope up that the Spezza of old is starting to rear his balding head?  If so, look out Eastern Conference!

Andy was a wall tonight, and could only be beaten by two unstoppable shots.  More of this, please!

Those penalties in the third could have easily cost the team a vital two points.  These things just can't happen when you're playing for a team on the playoff bubble. 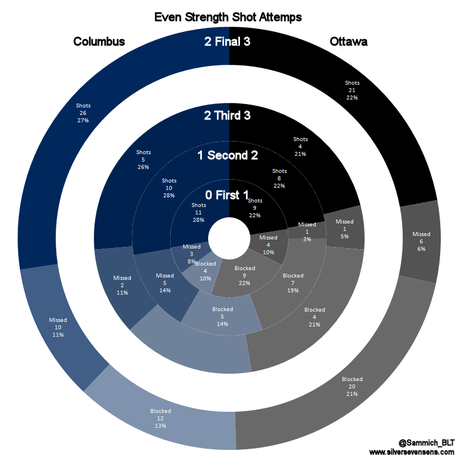