Senators stumble in 6-3 loss to Hurricanes

Share All sharing options for: Senators stumble in 6-3 loss to Hurricanes

As Adnan pointed out, the Ottawa Senators don't really do Robin Lehner any favors when he starts. Against the Carolina Hurricanes, Lehner returned the favor by not doing his teammates any favors with a miserable performance. This non-favor favor battle was the equivalent of Aliens vs. Predator for Sens fans: Whoever wins, we lose.

That also means there's no real reason to recap this game. All you need to know is that Robin Lehner allowed 4 goals before his teammates had scored one. All were goals that it's fair to expect an NHL goalie to prevent. When the Senators scored two goals (more on that later) to get back into the game and make it 4-2, Lehner allowed a fifth weak goal. Craig Anderson finished the game, taking over after the second intermisson, and allowed no goals--Carolina's 6th was an empty net--though Anderson was not heavily tested as Carolina was content to sit on a solid lead.

So, here's your new narrative: Robin Lehner sucks. He's not ready to be a starter, blah blah blah. Robin Lehner's weakness is the five-hole, and thanks to a stat from the Carolina broadcast, we all know it, and watching Lehner repeatedly give up five-hole goals in this game totally confirms it. The Senators should have kept Ben Bishop instead. Robin Lehner is immature... blah blah blah.

Or we could try this one on for size: Robin Lehner had a bad game. Craig Anderson has had plenty of his own this year. Lehner's play cost his teammates today--there's no denying that--but no one delivers optimal performances 100% of the time. It would have been nice if the Senators were able to come back and win a game for a guy who was struggling (Not unlike Kyle Turris and Clarke MacArthur trying to feed Bobby Ryan or Jason Spezza pumping pucks towards Mark Stone) but ultimately this was just a lone poor performance that gets magnified by both the result and importance of the game. That's the way it goes sometimes, but it's easy to lose perspective when looking for someone to blame.

Just in case it wasn't clear.

Phillips seemed to struggle with Carolina's short-burst acceleration in this game. I thought that would be a theme for Ottawa's other defensively-minded defenseman, but Jared Cowen and Eric Gryba didn't seem to have the same problems. It didn't help Phillips that partner Cody Ceci was also off tonight. In fact, there were a lot of one-man islands tonight, which is partly due to how Carolina played--they forced everyone to be a hero by themselves by giving up space and cutting off passing options. It was most obvious with Phillips, however, perhaps because it was most noticeable for him while he was in his own zone. That's not cool.

The line of Condra, Stephane Da Costa, and Cory Conacher wasn't used heavily in this game, and they didn't show much chemistry out there together. I thought the line was the most victimized by Carolina's "forced hero" strategy. But I felt Da Costa was more effective in his limited minutes than last game, and Conacher was able to pick up an assist while on the ice with some top-six guys and draw a penalty. Condra, though, was displeasing to the eye for me. Head coach Paul MacLean must have agreed with me, as Condra only played 9:28. Still, I had him down for a dishonorable mention before he became invisible by playing time. When Condra is on his game, he's an important role-player for the team. But when he's off, he doesn't bring any major redeeming qualities to the ice. I would have thought he'd be able to take advantage of fourth-line matchups, but he just wasn't able to in this one.

The armchair Jack Adams winners will be out in force after this game, because Lehner wasn't pulled when they thought he should have been pulled. But these are the same people who are ready to run the coach out of town for not giving young players like Patrick Wiercioch a long leash when they struggle. The savagery of hindsight bias is something to behold.

It was obvious to anyone watching--including the coach--that Lehner struggled in this game. But as the backup, Lehner's playing time can be sporadic and he was coming off of a shutout. What MacLean did was give a young player--a player who we've seen perform better than this game for almost the entire season--a chance to work through his issues rather than giving him a quick hook. A quick hook is fine for a starter like Anderson, who's going to play ~60 games and will likely get back into the net quickly to forget about a poor performance, but it's the wrong move for a guy who's still growing into the franchise goalie role. In his 20 games and 16 starts, Lehner's earned the opportunity to play through struggles. He got 40 minutes to do so in this game and that was the right call. It's frustrating that he was unable to, but the coach should be praised for trusting one of his most talented players, not condemned for not giving up on him quickly enough.

Loved everything about Gryba in this game. Two assists don't hurt his cause, but he was not giving up any ice to the Hurricanes this afternoon. He opened the game with a big hit on Jeff Skinner, ripping off Jared Cowen's moves, and continued that kind of play throughout the game. His passing accuracy is similar to a shotgun--it deteriorates rapidly with distance, and he doesn't exactly have Alex Ovechkin's sniping ability,  but those skills are merely nice to have for a defenseman. If all Gryba brings to the table is separating a guy from the puck and short-area passing ability, that's good enough to start a breakout. Gryba's deficiencies will be exploited by some teams--when they force him to skate the puck out of the zone, for instance--but they weren't a factor in this game. Phillips was eventually paired with Gryba, and there shouldn't be any doubt why.

Man, remember when nobody wanted this guy on our team? Turris was the yin to Lehner's yang (he he) in this game, single-handedly pulling his teammates back into the game with two consecutive goals (one shorthanded) in 3:47. He got crushed on faceoffs, but Turris was one of the few Senators players able to use his linemates effectively. This team could have packed it in after the fourth goal, and instead, Turris issued a decree that they were doing no such thing and his teammates responded. Love seeing that, even if it was for naught in the end. Turris continues to emerge as an important part of the team's future.

I could have scored on Lehner today. 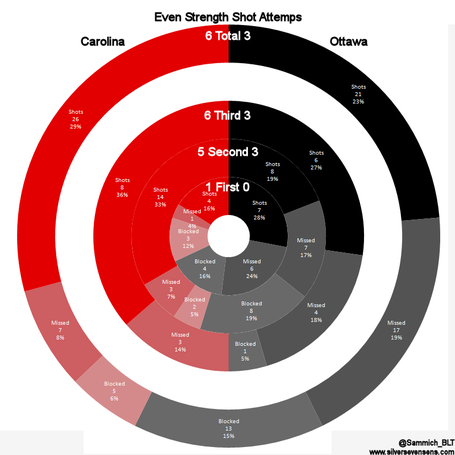 These were not pleasing to my eye.