Any point is a good point.

Share All sharing options for: Senators salvage point in 4-3 shootout loss to Lightning

Here are your frequently asked questions for the Ottawa Senators on Thursday, January 23rd, 2014.

Was this the worst first period the Senators have played all season? It might have been. There's a chance that the Sens might have played something worse than what we saw tonight during the chaotic start to the season, but the 17-12 shot count belies how hemmed-in the team was to start this game. By the 10-minute mark, the shot count was something like 14-3 in favor of the Lightning. Whether you're a believer in things like advanced stats or not, just about any number you pick would tell you that the home team won that period heavily. Fortunately, the Senators weren't getting destroyed via turnovers like they were at the start of the season--they were just unable to get the puck on their sticks. One of those weird things where there wasn't really much they could do differently except wait it out. It's amazing the game was 1-1 after the end of the first.

It was only 1-1? Craig Anderson must have been awesome. That's not really a question, my friend, but I'll allow it.

Have you ever talked to a little kid when you know they did something bad and you just want the little shit to admit it? And you're like, "Hey, amigo, I noticed there's water all over my expensive keyboard, and it's just you and I in the house and I know I didn't spill anything. Did you?" And they're like, "Well, I did, but I didn't." It can't be both, punk! Just come clean!

Anyway, Anderson was really strong tonight, except when he wasn't. Take, for instance, this shorthanded goal from Tyler Johnson, which opened the scoring:

I'm not sure why Anderson chose not to square up with Johnson there. Ondrej Palat is trailing, but not really in position to make a play on the open net--he's pretty far behind, and Johnson's pass would have to go through both Erik Karlsson and Bobby Ryan to reach Palat. I thought Anderson could have played that goal better.

He was less at fault on goals from BJ Crombeen (a skate deflection on the far side) and Palat (a tip-in during a total defensive collapse culminating in a broken stick for Cody Ceci) but you couldn't help but feel like Anderson could have been just a little bit better tonight on the goals scored. That doesn't mean he's at fault. Just that something was missing. He was fine the rest of the game. Which is as wishy-washy as the kind of answer you get from a punk kid, but whatever.

Bobby Ryan sucks and shouldn't play the point on a power play. Paul MacLean sucks for putting a forward out there instead of a defenseman. That's also not a question. You would lose on Jeopardy! This kind of "analysis" (it was brought up both by Denis Potvin and during the intermission) irks me. It's lazy to just shrug and say, "Oh, that's what you get for having a forward try to play defense." Watching the replay above, you can see that Jason Spezza tries to feed the puck back to Ryan--the first attempt is foiled when Spezza's stick is lifted, which handcuffs Ryan a little, and the second one just kind of slides by his stick.

So, it's not like there was some kind of lack of defensive awareness from Ryan that caused the turnover. As a skilled forward, he's almost certainly capable of receiving a pass on his backhand. The play in question is mostly bad luck, and has nothing to do with what position Ryan typically plays nor his defensive abilities. Of course, that doesn't mean there aren't risks in playing a forward on the point, just that those risks weren't factors on this particular play. A puck can hop anyone's stick--just ask Chris Phillips.

Were special teams a factor in this game? Uh, yeah. Ottawa's power play was the only thing that kept them in this game, as they weren't really generating quality scoring chances 5-on-5. And of course, Johnson put in a shorthanded goal. That was lame. Meanwhile, Ottawa's PK unit went 2-for-2, and both were important kills that came late in the game: One with Phillips off for interference, and one in overtime where Ceci was called for a phantom trip.

Was Erik Karlsson the best player on the ice? Uh, yeah. A killer goal and a huge assist doesn't begin to cover it. His old acceleration was in fine form tonight, and his vision was top-notch. I bet if you asked him about his repaired Achilles tendon, he'd tell you it's no longer a factor for him. He may have been 100% healed at the start of the season, but there's clearly a difference between how he started and how he's playing now. Maybe he's just more confident, but this game saw Karlsson pull a tight pirouette on just his bionic leg, and throw another open-ice hit, one of two he made on the night. He killed it tonight.

Did the team miss Marc Methot? Strangely, I'd say no. There's a lot of drama swirling around Methot right now, but he's going to dress on Saturday in place of Eric Gryba or Patrick Weircioch and everyone will shut up about it except the people who are on the Gryba or Wiercioch bandwagons. Really, the team has always been Karlsson and company and the other five defensemen are pretty interchangeable at this point of the season. Someone will get traded, and we'll all talk about how the team is better off with them, and then when they blossom because they're a young player who's still growing, we'll all lament that we let them get away. Unless it's Joe Corvo.

How did Ottawa tie the game? Z. Smith just ran a gauntlet of punishment to hold on to a puck until he could dish it from his butt to Chris Neil. Neil then chopped a whiffleball shot past Ben Bishop. It's not the kind of goal you'd expect to go in, but hey, for a guy's 100th goal, it was a pretty big deal.

How did Clarke MacArthur score that goal when he gave Ben Bishop all that time to get set? Man, I don't know. We saw during his time in Ottawa that Bishop can be a little slow to close the five-hole because his legs are so long. I don't know why the Sens didn't try to take advantage of that more. Maybe MacArthur just has a fast release?

Does Mika Zibanejad have just one shootout move? Yes.

I wish we had won this game. Me too.

Mentioned above, he was the best player for either team tonight.

Spezza has been charging up the ice full steam recently and we saw it again tonight. It's not surprising to see him earn two assists out of effort like that.

No points for Michalek in this game, but in a disjointed first period, he was one of the few players that generated consistent up-ice presence. I loved the way he competed all night and felt he deserved a better fate if not for...

Queue up the revisionist history. I've always been a fan and he looked like a stud tonight--despite misplaying a bunch of pucks.I can't believe all we got for him was Cory Conacher.

I've seen enough. Call up Mike Hoffman or something.

B_T made this doughnut thing and it's pretty awesome. I'll call it what I want because I'm the boss. 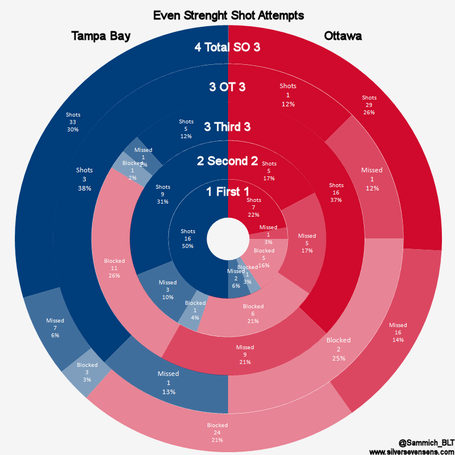