We need to talk about Ceci

Cody Ceci joined the Ottawa Senators on an emergency recall nearly 20 games ago, but it looks like he's here to stay.

Share All sharing options for: We need to talk about Ceci

Cody Ceci is approaching his 20th game with the Ottawa Senators, and it seems pretty clear that he's not going back to Binghamton any time soon.

It's surprising because he's a 20 year old rookie whose defensive zone play was criticized just last season while playing against junior players.

It's surprising because coach Paul MacLean used to leave Ceci's junior games after 2 periods because he hated watching the way he played (and now loves telling that story every chance he gets).

It's surprising because he failed to make the team out of camp, and was only brought up as an emergency recall when Marc Methot had the flu and Jared Cowen had been suspended.

It's surprising because every other Senators defenceman not named Karlsson or Phillips has been a healthy scratch since Ceci's call-up, but Ceci has not sat out once.

At the time of his call-up, Ceci had posted 17 points in 24 AHL games, which is pretty okay for a defenceman in his first pro season, I guess. It had gotten to the point that Paul MacLean said he was probably the best player in the league for October and November, which is pretty high praise for your first two months as a professional hockey player.

He's taken that success at the AHL level and brought it to the NHL with nary a hiccup. That's impressive. So let's take a look at how Paul MacLean has used him thanks to Hockey Abstract's usage chart: 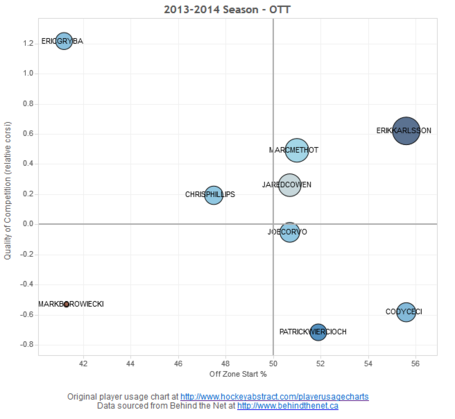 For those unfamiliar, the bubble size reflects time on ice while the colour reflects the player's corsi, dark blue being good and dark red being bad. The X-axis is offensive zone starts, while the Y-axis is quality of competition. You'll find Ceci (see! see!) in the bottom right corner, which shows that Paul MacLean is sheltering the kid a lot. He's getting the second most offensive zone starts on the team (behind only Erik Karlsson), and he's playing weaker opposing players (only Patrick Wiercioch faces easier competition). He's fifth in average time-on-ice among Senators defensemen, so it's clear that Paul MacLean is easing him into the NHL.

But that's to be expected with a rookie d-man, particularly one who just turned 20 in December, so let's look at him in comparison to some of the best rookie d-men in the league: 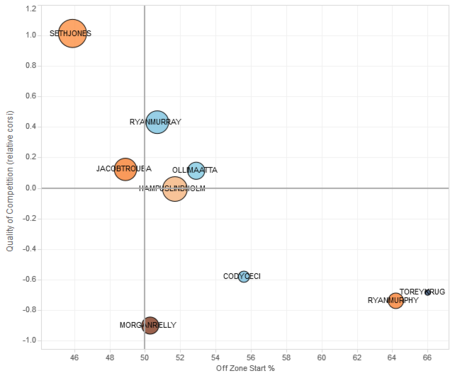 What you'll notice here is that Ceci is one of the few to have a blue bubble, which shows he's a rare positive possession player as a rookie d-man. It also shows that while he gets sheltered by the Senators, this is not uncommon -- most of these players are getting either favourable zone starts or playing against weak competition.

Here's a table that shows these stats, sorted by points per 60 minutes of icetime:

What that shows (if you can read it), is that Ceci's point production per 60 minutes is near the top of the list. For those wondering why he has 0 goals per 60 minutes, that's because these charts only track 5-on-5 stats.

But Ceci is not only a 5-on-5 player, as Paul MacLean is using him in all situations. Ceci averages 1:41 TOI/game on the penalty kill, which is more than Karlsson, Mark Borowiecki, Patrick Wiercioch, or Joe Corvo. He's also third in time-on-ice among Sens blueliners on the powerplay as well, behind only Karlsson and Wiercioch. Overall, he's playing the minutes of a #5 defenseman, but he's proving to be quite versatile in that role.

The Senators have not been shy to send players back to the AHL this year: there are currently 6 players in Binghamton who have spent some time with the big club this season. And yet somehow, against all odds, Cody Ceci remains in Ottawa and has forced a penny-pinching team to sit two defensemen on the bench in order to play him. It's extremely impressive, and it's something that most of us didn't see happening when the season began.