The Weather Outside was Frightful, but the Score is so Delightful

Share All sharing options for: The Weather Outside was Frightful, but the Score is so Delightful

The Senators arrived in Washington having lost consecutive games, but there was some good news for Ottawa: Washington captain Alex Ovechkin would miss the game with injury. Responsible for almost half of his team's offense this season, Ovechkin's absence would hopefully impact Washington's offense. The injury bug was also a factor for Ottawa, as defenseman Marc Methot was injured during the morning skate, replaced by Patrick Wiercioch. The game started with some nice pressure from Sens defender Erik Karlsson and the Turris line. An early Washington penalty sent the Sens to the power play but the Sens were unable to generate much pressure. A soft interference penalty on Sens captain Jason Spezza late in the period sent Washington to the power play for the first time but the home team was unable to capitalize. Karlsson laid out Mikhail Grabovski with a big neutral zone hit during the final minutes. The last 30 seconds were somewhat eventful, as Craig Anderson made a save on Capitals defender John Carlson, who was partially tied up by Patrick Wiercioch. Eric Gryba took a penalty on the same play, giving Washington its second power play of the night. The period ended with the Sens on the PK and Zack Smith and Martin Erat trading stick jabs. Ottawa had the better pressure and scoring chances, but shooting accuracy was a problem and consequently, the Caps outshot the Sens in the first period, 10-6.

The second period began with my cable freezing for a few minutes. The Sens were able to kill off the rest of Gryba's penalty. The first half of the period contained more sustained pressure from the Capitals but not much in the way of scoring chances. The Caps missed on opportunity to make the most of a vulnerable Cody Ceci who spent almost a minute in his own zone without a stick. Ceci's positioning was sound for the shift and he managed to make a good pass with his glove and pinned it along the boards with his skate waiting for help to arrive. Karlsson's neutral zone activity continued in the second, as he stopped a couple Washington breakouts. At the midway point, Mika Zibanejad drew a penalty and Ottawa went on its second power play of the game. The power play had difficulty establishing possession in the Washington zone and Erat had the best chance shorthanded on Andy.

With seven minutes remaining in the period, a quick defensive zone pass from Clarke MacArthur to Kyle Turris sent the centre off on the breakout with speed. Gaining the Washington zone on a 2-on-1 with Bobby Ryan, both the Caps defender Carrick and goalie Braydon Holtby seemed aware of Ryan's presence because they weren't ready for Turris's quick shot. The shot went five-hole on Holtby and put the Sens up by one. The goal was important because the tempo of the game immediately picked up. Karlsson had a couple of chances near the Washington goal and the Capitals responded with a bit more pressure on Andy. Zack Smith took a high stick from Dmitry Orlov, sending the Sens back to the power play. The power play ended prematurely with a Clarke MacArthur penalty behind the Washington net.

With the Senators killing the finally seconds of the MacArthur penalty to start the third, Jared Cowen took an early penalty, extending Ottawa's shorthanded time. The Senators successfully killed off the Cowen penalty as well and Ottawa ramped up the offensive pressure. Five minutes into the period Turris made an excellent play at the Washington blue line to keep the play onside after everyone had exited the zone. Turris fed a streaking Ryan, who had hustled back into the Caps zone. Ryan beat Holtby with a slick move, but was unable to corral a rolling puck into the open net after a slight touch off the goaltender's toe. Midway through the period, a good rush by Cory Conacher led to a 2-on-1 with Ceci, who was hooked by Erat, drawing a penalty. An unexpected PP unit comprised of Karlsson, Wiercioch, Stephane Da Costa, Colin Greening, and Jason Spezza led to some precision passing between the defenders and the captain. The trio would combine on Spezza's goal, a snap shot from the top of the circle.

Things got a bit heated after the second Ottawa goal. A Grabovski hit on Zack Smith resulted in a scrum. Grabovski appeared to claw at Smith's face after the situation had been mostly diffused and earned himself a 10 minute misconduct for the move. The Sens and Caps traded chances for the rest of the period, with Washington having the better of the play after Spezza's goal. Andy was at his best in the final 10 minutes of the period, making several quality saves. Washington pulled Holtby late, but the Caps were unable to capitalize with the extra man, nor were the Senators able to score on the empty net. Ottawa wins 2-0. Shots 34-26 in favour of Washington.

After two losses in which his save percentage was nowhere near acceptable for an NHL starting goaltender, Anderson responded with one of his best performances of the season. While the Capitals attack is anemic at best (worse tonight without Ovechkin for the whole game and Grabovski for the second half of the third period) they did have several quality scoring chances and Andy was ready for all of them. One of his best performances of the season, Andy looked confident tonight and his positioning looked much better than in recent appearances.

Turris had an excellent game. He was defensively sound and responsible for some of Ottawa's best chances. An excellent breakout and strong shot resulted in the game winning goal for Turris and he also set-up Ryan for one of the best chances of the game. I was impressed with Turris's strength tonight. It's clear other teams have begun to target him physically (he took a few big hits tonight and a high stick to the head) yet this increased pressure isn't knocking him out of the play.

Karlsson had a great game. He's looked excellent against Washington all season and tonight was another strong performance. He drove Ottawa's offense and was key in setting-up Spezza's insurance marker. Karlsson also had a great defensive game. He was sound in his own end, but perhaps more impressively, he was stopping Washington rushes at the inception point in the neutral zone. Using both his body and stick, he quickly moved from breaking up Washington rushes to beginning another Sens zone entry.

Things have been tough for Spezza all season and especially lately. But his power play goal was the insurance marker Ottawa needed. It was also a great shot and a timely reminder of the skill he possess.

Wiercioch's most frequent position these days has been press box. Getting a chance for the first time in a few games, I thought Wiercioch looked nice and steady. Liked his work on the power play as well; he earned an assist on Spezza's goal. 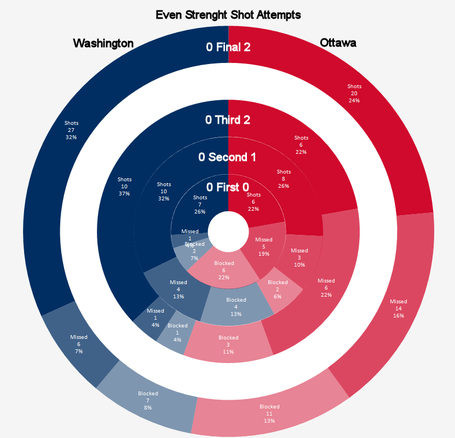