What's the deal with Jared Cowen?

Jared Cowen is dealing with a lot of criticism in the first year of his new four year deal. Is it warranted?

Share All sharing options for: What's the deal with Jared Cowen?

Jared Cowen's having a bit of a rough go of things lately: on Thursday, his own goal cost the Senators a win against the Habs, and on Saturday he spent most of the third period on the bench. Add this to a rather underwhelming presence for most of the year, and it's making his $3.1M/4 year deal look even worse now than it did when he signed it.

Cowen's been a bit of a whipping boy this year, and so it's interesting to see if that's just because of his big contract or if it's because his performance has actually declined from his last full season in 2011/2012 (remember, he missed most of last year with a hip injury). From the eye test, it seems that it has: Cowen's puck handling skills leave something to be desired, he's been more prone to gaffes this season, and his passes are rarely tape-to-tape.

But the eye test can be deceiving, so it's also helpful to look at some of his stats. He's on pace for about the same number of points as when two years ago (17 points in 82 games), so we'll have to dig deeper. One of the best ways to compare his two seasons is to look at his player usage chart from two years ago and from this year, courtesy of Hockey Abstract: 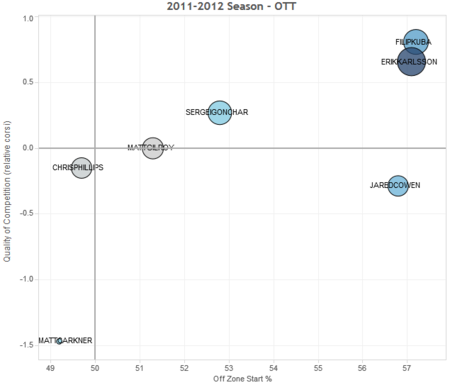 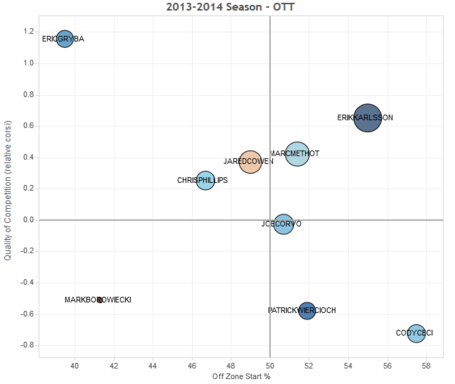 For those unfamiliar with these, the X-axis shows the offensive zone starts of the player, while the Y-axis shows the quality of competition faced. A blue bubble means positive on-ice corsi, while a red bubble means negative on-ice corsi, and the size of the bubble reflects the player's time on ice. On-ice corsi is simply a reflection of possession, or how many shots are being directed at the opponent's net compared to the player's own while he's on the ice.

As you can see, Cowen's usage under Paul MacLean this year is drastically different than what he saw two seasons ago. Two years ago, Cowen saw very favourable zone starts and played against weak competition. In these sheltered conditions, he was able to post a positive on-ice corsi. In other words, Cowen looked good out there.

This year, his workload is completely different. He's facing tougher competition, starts more often in his own zone, and the result is that when he's on the ice the other team gets more shots on his net than the Senators get on the opponents. In other words, Cowen doesn't look quite as good out there.

These charts make it suggest that Cowen's struggles this year are attributable to his tougher assignment, and there's certainly some truth to that. But what these charts ignore is a rather important factor: Erik Karlsson. Cowen rarely played with Karlsson in 2011/12, but they've played together a lot this season. As Karlsson is a huge driver of possession, it's critical to look at Karlsson's effect on Cowen and Cowen's effect on Karlsson:

The good news is that Cowen doesn't drag Karlsson down noticeably. The bad news is that without Karlsson, the opponents dominate the Senators when Cowen's on the ice. It's pretty clear that Karlsson is keeping Cowen afloat in this pairing.

This isn't isolated to just Karlsson, though. Looking to Cowen's with or without you numbers, most of his frequent linemates fare better when Cowen is on the bench than when he's on the ice with them.

Here are the conclusions from the data:

That sounds bad, and it is. But we can't simply look at these numbers in isolation, we also have to look at the bigger picture. Given how long Cowen has been seen as a top prospect in the organization, it's easy to forget that this is only his second full pro season: he more or less skipped the AHL (other than joining the Calder Cup run), and he's missed a couple of development years due to knee and hip injuries. It may be that his current struggles are simply a reflection of him being thrust very quickly into a difficult role at the NHL level without the requisite experience.

Some fans seem to have written off Cowen already, and it's far too early in his development to do that. It's not too early, however, to say that Cowen's performance has dropped off from his rookie year, and that he's struggling in his current role.