Senators fall 4-1 to the Rangers

Just when a wild card position was within reach

Share All sharing options for: Senators fall 4-1 to the Rangers

It started off well enough.  Both teams were setting a good pace, playing some entertaining back and forth hockey.  Ottawa even got some puck luck with the Rangers putting a clean shot off the post.  It didn't take too long to open up the scoring.  Milan Michalek, with a little help from Cory Conacher, stripped Benoit Pouliot of the puck and fed it out to Cody Ceci on the right point.  Ceci fed the puck to a waiting Marc Methot on the left, who caught all of the Rangers on the far side of the ice.  With nobody to take the puck away from him, Methot waited just long enough for there to be some traffic in front of the net before rifling it in from the top of the circle.

Having taken the early lead, Ottawa kept the pressure up.  Not 2 minutes later, Bobby Ryan slipped out from behind the Rangers net and fed the puck to Erik Condra pushing in to the slot.  Condra fired off the one-timer, with predictable results. The puck found it's way out to Erik Karlsson on the point.  He fired it towards the net through traffic, Condra gets the tip... with more predictable results.  All in all, Ottawa had a few scoring chances in those few minutes after taking the lead, but couldn't capitalize on any of them.

The momentum wouldn't last though.  After the flurry of activity in their, the Rangers started to take control of the possession game.  Ottawa had a few chances, but always on the rush and never managed to set up any offensive zone pressure.  On one such rush, Bobby Ryan drew the hook from Derek Stepan and Ottawa was off to the power play.  It wouldn't last long, with Clarke MacArthur sent to the box for his own hooking infraction only 25 seconds in to the Stepan penalty.  Shortly after that Rick Nash would take an Erik Condra stick to the face, and after a drawn out play with Cam Talbot on the bench for the extra attacker, the Rangers would go to a 4 on 3 power play.

Again, some puck luck with another shot going off the post during the 4 on 3 play.  But with Stepan coming out of the box first, the 4 on 3 became a 5 on 3.  Stepan - who else - got the puck low and wide, drew Craig Anderson across the net, and rifled a pass across to a waiting Brad Richards on the far side.  Anderson looked like he thought the puck was going to Ryan Callahan right in front of the net, and having re-positioned to deal with that he was no longer on the post and had nothing to push off of to get across to be in position against Richards.  With a wide open net, and not being Erik Condra, Richards put the puck in to tie the game up.

Fun fact #1: Ottawa is in the bottom half of the league for winning percentage after scoring first.

The rest of the period wouldn't be much better, being mostly spent in the Ottawa end.  Despite being out-shot 10 to 6, out-attempted 20 to 11 and having Anderson beat 3 times (but the posts only once), Ottawa managed to weather the storm and left the first period with a tie game.

The Sens opened the second period on the penalty kill, thanks to a tripping call against MacArthur late in the first, and that pretty much set the tone for the first few minutes.  Ottawa spent that time struggling to get the puck out of their own zone, and trying to minimize Rangers scoring chances.  Attempts to turn that around weren't helped by an inadvertent puck over the boards by Karlsson, which resulted in a delay of game penalty.  Not only did Ottawa kill the penalty, the kill also led into their best stretch of play in the second period.  They didn't manage to get anything with it other than lifting some pressure off of Anderson.

The power play unit got a chance to make up for blowing the man advantage in the first when Neil pasted Dominic Moore against the boards with a clean hit, and Moore's retaliation got him 2 for roughing.  While they managed to not take a penalty (or two) this time around they also weren't able to get much going, and without the zone pressure or any whistles they also had trouble getting fresh legs out.  A scrum in front of Talbot shortly after the power play ended gave a decent scoring chance, but nobody was able to bury the puck for the go ahead goal.

Just as it looked like Ottawa would finally get some sustained pressure going again, a lob out past centre ice found a rushing Rick Nash.  Cody Ceci tried to get back in time, but was too far back and too far to the other side to make a difference.  Nash let one rip from just inside the top of the circle, beating Anderson over the far shoulder.  2-1 Rangers.

The rest of the period was a lot of back and forth, but was pretty uneventful.  Neither team were really able to get any pressure going.  Then, in the dying seconds of the period, rather than taking possession of the puck and skating it around, Karlsson gave the puck away from behind the Ottawa net right on to the stick of Stepan who beats Anderson short side to give the Rangers the 3-1 lead.  Ottawa would go to the dressing room down by 2 after 2.

The third period was mostly Ottawa.  Part having more jump in their steps, part score effect, they had as many shot attempts in the third as they had in the first two periods combined, and more of those attempts actually reached the net than in the first two periods.  Despite having a number of fantastic chances off the rush, they were never really able to set up any real offensive zone presence.

Another 4 GAA game for Andy.  He misread the pass on the first goal, probably should have had the second goal and the fourth goal (or at least one of them).  The third goal is more forgivable, but he was still caught a little flat footed on it.

Turning a power play into a 5 on 3 against with two avoidable penalties is a bad, bad thing to do.

3 of the 4 goals came off of Ottawa turnovers.  They were also credited with 14 giveaways on the score sheet tonight.

So light and flaky, with a variety of fillings available.  Mmmm.

While he wasn't pressured very much in the first 40 minutes, he did have to make a number of big saves in the third period to hold the lead.

Slick pass to Richards for the first Rangers goal.  Fed the flying Nash for the second goal.  Took Karlsson's gift to score the third goal himself.

Lots of effort from him tonight and he generated a few scoring chances for himself and others, but things just wouldn't click. 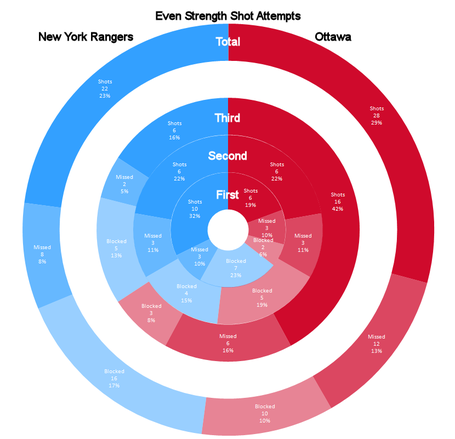