Share All sharing options for: Not Quite Good Enough: Honouring Senators History

Last week former Senator Wade Redden retired after 16 seasons of pro hockey. Redden spent 14 of those seasons in the NHL as a member of the Ottawa Senators, New York Rangers, St. Louis Blues, and Boston Bruins. The bulk of Redden's career - 11 seasons - was spent in Ottawa. While his play declined during his final contract with the Sens, he was a very good player for Ottawa. Part of a core group of players drafted and developed by the Senators, Redden is one of the first of this group - a group which first brought success to the capital and were the first to contend - to retire.

Redden's retirement poses a larger question for the Senators: what to do with the group that was not quite good enough?

Redden's already gone. Daniel Alfredsson and Chris Phillips aren't far behind. Marian Hossa's contract structure suggests he'll only play a few more seasons. Radek Bonk is still playing hockey in the Czech Republic, but for how much longer? Bridging the gap between the early Senators and the contending teams, Alexei Yashin has already hung up his skates and Mike Fisher has been talking about retirement.

When he retires, Daniel Alfredsson will have his number by the Senators if he wants the honour.

But in my mind, no one else from the Alfredsson era has earned the honour. Alfredsson was equal measures great player and long-serving captain. If Erik Karlsson's elite numbers continue for the length of his contract, it seems a lock that his name and number will join Alfredsson's on a banner hanging from the rafters of the Canadian Tire Centre. If Jason Spezza signs a new deal with the Senators, he has the potential to achieve such heights as well.

What about Redden though? After Redden's retirement announcement, I had a brief twitter conversation with Jared Crozier (@alfieishuman) and Tom (@TomSENS) about how to honour the good - but not great - players in Sens history. A Ring of Honour similar to the Vancouver Canucks or the Toronto Blue Jays was suggested.

There are things I like about the Ring of Honor idea. The criteria are more flexible. Players like Redden and Phillips are marked as sign posts in the team's narrative. Longevity is rewarded. Fleeting excellence can be as well. Members of the team's management can be honoured, like Jacques Martin. If both sides are willing, it offers a potential method of reconciliation with players who parted from the team under negative circumstances while distinguishing them from players like Alfredsson. The Ring of Honour offers a high level of visibility. Fans visiting the arena can see the honoured numbers on the façade of a seating level and viewers at home will occasionally catch glimpses of it as well.

I think the Ring of Honour is fine, but it's not enough. The Blue Jays have a Level of Excellence at Rogers Centre honouring past players like George Bell, Joe Carter, and Roberto Alomar, as well as management personnel like Cito Gaston and Pat Gillick, and legendary radio voice Tom Cheek. The Jays have had some great players and people associated with the franchise and they deserve to be recognized. You can read a short bio on each member of the Level of Excellent on the Jays website, but if you're attending a game, there's not much else to the Level of Excellence. Nothing in stadium expands on the significance of #12 or #1 or #43. This method of honouring people misses the opportunity to construct and convey the team's narrative and to provide another highlight for the in-game experience. 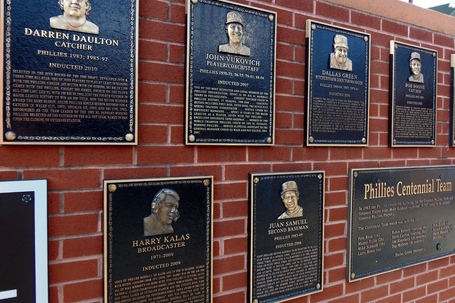 Above: The Philadelphia Phillies have a hall of fame of sorts, accessible by the outfield bleachers

A hall of fame expands the team's narrative as well. The Baltimore Orioles Hall of Fame has an abundance of former players and management personnel, but also has team personnel, broadcasters, and fans. When I took a stadium tour a couple of summers ago, the enthusiastic tour guy suggested Janet Marie Smith, the architect of Oriole Park at Camden Yards, would one day be a member. Which makes sense. The stadium revolutionized baseball and initiated a return to a historic, retro aesthetic. After more than two decades, the stadium remains one of the best in baseball and has become as much a part of the team's identity as birds and Cal Ripken, Jr. 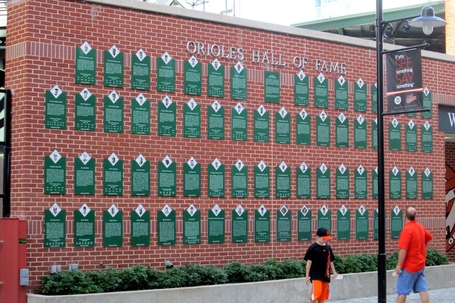 The Senators of Redden's era weren't quite good enough to win the Stanley Cup but they're part of the team's history and deserve to be part of the team's narrative. The early years of the Sens Hall of Fame might be a little threadbare, but with each induction class the site and narrative will grow.