Share All sharing options for: Five Thoughts for Friday

1) There's just something about 2 p.m. starts that pisses me off. The only thing that's worse to me is the excruciating delay for games that Montreal hosts due to whatever ceremony they have going on that game. I don't know about anyone else, but evening games are like a nice reward for me--a great way to wind down from a long day. Of course, I tend to get cranky if the team loses, like, if, say, they SCORE FOUR UNANSWERED GOALS TO TAKE THE LEAD BACK AND THEN GIVE IT AWAY LATE IN THE GAME, but still... the Sens are my entertainment treat.

After the games if I don't have to recap, I just do a quick scan for flags looking for jerks to ban, and then it's off to bed. Can't do that with a 2 p.m. game. After the Senators crush the Rangers, it's gonna be 5 p.m. and I'm going to look around my place and say, "Well, now what?" I feel like my personal routine is more important than the team's gate revenue. So, they should fix that.

2) Man, how can you not feel bad for Jared Cowen? As the season's resident whipping boy, he's going to get so much shit for last night, almost none of it deserved. The narrative won't be about how he had two assists on the night--helping to create both goals that got Ottawa back into a game after trailing 3-0. Instead, it will be how he's a garbage defenseman because there was an own-goal off of his skate. How he sucks at defense and should have never let Tomas Plekanec on a breakaway. None of that is true, of course. Here's the start of the play in question: 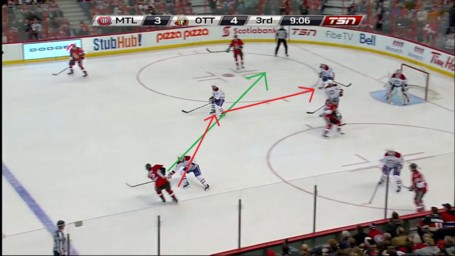 Cowen has two passing options: Bobby Ryan, at the top of the screen, has an okay angle to shoot. Kyle Turris, whom Cowen elects to pass to, has essentially taken over the low slapshot position once held by Daniel Alfredsson. Based on where Price is, if the pass connects with Turris, it's probably a goal.

Of course, it doesn't connect. It deflects just slightly off of Plekanec's stick, and then off of Brian Gionta before arriving right at Josh Gorges' feet. By that time, Plekanec is already up the ice. Plekanec is free to gamble here, because if he's caught up the ice, the man he's leaving open is Cowen--not a significant scoring threat. And, as we know, if Plekanec doesn't gamble, Turris is likely scoring anyway.

Is Cowen gambling also? Absolutely. The safe play there is to pass to Ryan, take the lower percentage shot, and hope for a rebound. Instead, Cowen goes for the jugular. It's the kind of play we laud Erik Karlsson for. It's the kind of play a guy like Keith Yandle would make. Gionta is not in position to get his stick in the passing lane. It's a reasonable gamble to make.

Plekanec is going forward before he even gets a piece of the pass. The only way Cowen could possibly defend a breakaway is if he knew his pass would be deflected directly onto a Montreal stick before he made the pass. Criticizing Cowen for this decision is suggesting he sucks because he can't predict the future. That kind of "analysis" is both ignorant and gutless. Even with the unfortunate bounce, Craig Anderson was able to make a save. The play ended poorly with a second unfortunate bounce that is magnified in scope both by the score of the game and the player it went off of. This goal, which sucked on every possible level of suck, wasn't the result of poor play by Cowen. It was the result of two unlucky bounces happening to the same player. No reasonable person is going to suggest that's poor defense simply because the result is dissonant with their desires. If this puck goes in off of Karlsson, we shrug it off as a gamble gone wrong. But because it's Cowen, who's easy to target, some will shrug off the reality of the play instead in favor of blaming someone it's en vogue to hate.

(Double bonus analysis: Karlsson obviously would have had the speed to catch up to Plekanec, which is why he's allowed to gamble. Also, Karlsson probably wouldn't have passed there. He would have done a reverse 360 to gain space, and then probably have passed to Ryan, who would have moved to better shooting position. He might have gone to Stone to try the back-door play to Turris, but a pass from Stone has to go through two guys and I don't think that's Karlsson's style. I say he makes a move to give himself space and then makes the pass. That's why he's Karlsson.)

3) Speaking of en vogue hate, after Anderson let in 3 goals on 5 shots, and with Robin Lehner coming off of a shutout, you just knew the rumblings about who should be starting would begin again. After the team turned things around, I thought there was a chance we might not hear them, but given that Anderson let in a weak goal in overtime to lose the game, I have no doubt they're coming.

People who want Lehner in net will ignore Anderson's play during the team's winning streak and focus on his one bad play last night because it's also magnified under the circumstances. That's not fair to Anderson. The guy has played well enough to start on Saturday--regardless of the outcome against Montreal.

As for me? I want Lehner. It has nothing to do with how Anderson played on Thursday, or how he's played in any of the other games. (See? Ignoring reality! It's so easy!) I just feel that Lehner gives the team a better chance to win. That said... I'm comfortable with Anderson starting against New York.

Anyway, in October, the team gave up 24(!) shots in a single period to the San Jose Sharks. They only gave up 23 total to Montreal last night. Now, Montreal, Minnesota, and Nashville are not exactly San Jose, but the team's defensive improvement is pretty noticeable at this point of the season. It's probably easier for goalies to make saves when they're seeing fewer shots.

5) I mentioned this in my recap of the Nashville, but I've come to believe that Jason Spezza's hands and feet are playing different games. What does that mean?

Well, in short, I think Spezza has the quickest hands on the team. I was really blown away by how quick he is with the puck. His release might not be the fastest, but I think the time between a Spezza decision and a Spezza hand movement probably has to be measured with whatever they use to stopwatch neurons. His hand speed was on full display when he set up Karlsson's goal against Montreal: Watch closely, and as soon as he settles the puck down and looks up, he notices Karlsson creeping. In the same instant, you can see him make the decision to fake the shot and fire the slap pass.

But all of this happened when he was standing still and not being pressured.

I don't want to say Spezza has lost a step, because he still looks plenty fast to me, and it's not like he was ever a blazer out there to begin with, but it seems to me that in terms of skating, his feet are frequently a little behind his hands in terms of timing. If he could get them in sync, I think he'd have a little more success.

As it is, he seems determined to force-feed the puck to Mark Stone, and that's a great position for the youngster to be in. Spezza wants Stone scoring, and he has the hands to make it happen.