The Ottawa Senators and the burden of expectations

The Senators have had the luxury of going into the past two seasons as underdogs. That's not the case this year.

Share All sharing options for: The Ottawa Senators and the burden of expectations

Even though he’s been the head coach of the Ottawa Senators for two seasons already, Paul MacLean is entering unknown territory this year: expectations.

For the past few seasons, there have been zero expectations on the Ottawa Senators. This is a team that was expected to finish at the bottom of the league the last two years, but is now riding a wave of hype that they have not seen since the 2007-08 season. Predictions are starting to trickle out for the upcoming NHL season, and hard as it is to believe, the Senators are now expected to be one of the top teams in the league. Dave Lozo at the Score has them 5th. Stat guru Rob Vollman, in his excellent new book Hockey Abstract, had the Senators as the team most likely to win the President’s Trophy this year. The Sports Forecaster picked the Senators to hoist the Stanley Cup at the end of the season, and readers of the Ottawa Citizen clearly expect a long playoff run, with 85% of readers thinking the team will make it past the first round: 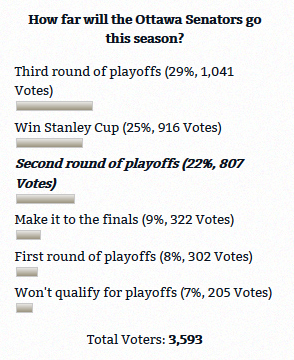 Going into a season with high expectations can be crushing for a fanbase if the team does not live up to the hype. As an obvious example, the Toronto Blue Jays entered this season as World Series contenders but are currently the whipping boy of Canadian sports media. Given the volume of media coverage about the utter collapse of the Toronto Blue Jays this year, they must have done significantly worse than last year, right?

Last year, the Jays posted a .451 winning percentage. This year, it’s .465. The endless hand wringing currently taking place is over a team that is actually performing better than the one last year. At the same time though, it does feel like the most disappointing season Toronto’s had in years, because this is a team that is supposed to be much better than the one that came before it.

The Senators are not the Toronto Blue Jays, by any stretch. They did not undergo the same type of dramatic overhaul, are not the only Canadian team in their league and the hype around the Senators pales in comparison to that of the Jays at the start of the season. But they are still a team that has to learn that what was acceptable in years past may not be acceptable anymore, at least not this year, and that there will be increased scrutiny if the team does not perform. The Senators were not supposed to make the playoffs the last two years, and just doing so was a success. Just making the playoffs this year would not be considered a success for this organization, and that is a lot of added pressure on the players and coaching staff.

When MacLean signed his three-year extension this offseason, he commented that he was terrified about the future. If I faced the same kind of expectations MacLean has this year, I'd be terrified, too.