Erik Karlsson is the best player to ever play for the Ottawa Senators.

What's incredible about Karlsson is that he has really improved every season in his overall play. Here are how some of his offensive stats have progressed from the start of his career. 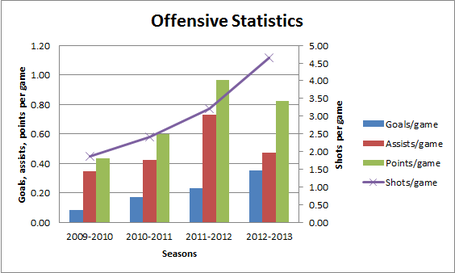 His goals per game and shots per game have increased in every season, although the assists and points/game dropped this year, this can be partially attributed to a loss of on-ice talent around him. Having said that, 0.82 points per game for a defenceman is still a fantastic total and a 68 points pace over 82 games.

The graph below shows how Karlsson's usage has changed over the course of his career, starting in 2009-2010. The line represents the quality of the competition he has faced. 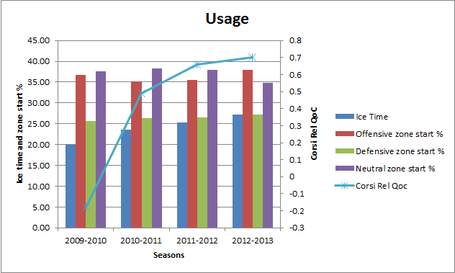 His ice time has increased steadily from year to year, as has the quality of the competition he has faced. His deployment with respects to zone starts has stayed relatively steady, with slight fluctuations year to year. With offence still his number one weapon, he is certainly used more in the offensive zone than in the defensive zone.

Note: both Corsi For and Corsi Against have been calculated such that the more positive the number the better. 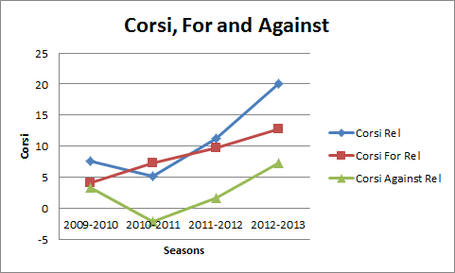 Karlsson's offensive Corsi has increased in every season and the defensive and overall Corsi have increased in the last two seasons. Compared to the rest of the team, Karlsson's offensive Corsi has ranked first in every year of his career. On the other hand his defensive Corsi was third in his rookie season (against easy competition), before dropping to fifth in his sophomore season after an increase in the quality of opposition faced. Since then he has has the second best defensive Corsi in 2011-2012 and the best in 2013. His overall Corsi relative has been first on the team in his rookie season and the last two seasons, while ranking second in 2010-2011.

Many would consider Karlsson to be the best player on the team and the player around whom the club's system runs. Stopping Karlsson has also become a large part of the opposition's game plan. Before his injury in 2013, Karlsson was leading all NHL players including forwards in shots on goal and was mentioned by TSN analyst Bob McKenzie as a candidate for the Hart Trophy.

He has been the #1 Ottawa Senators player under 25 in every series that we have done and will continue to be #1 until he turns 25. Karlsson should rank near the top of a league wide top 25 under 25 among the likes of Steven Stamkos and John Tavares.

Karlsson is the best player on this team right now and by the time his current contract runs out in six years, there is a very good chance he will have made a solid case for removing Daniel Alfredsson as the greatest ever Ottawa Senators player.

To conclude, watch this video of every single touch of the puck by Erik Karlsson in a game against the Carolina Hurricanes in a February 2013 game. It is almost 11 minutes long but well worth watching.