Spezza becomes only the second captain since the new millennium.

Think about that: the last time the Senators named a new captain, the Y2K bug was still a thing, Jean Chrétien was Canada's prime minister, and Bill Clinton was the United States' president. You could still wear shoes through airport security. Star Wars: Episode I was in theatres. Friends was about to start its sixth season. Radek Bonk had yet to lead the team in scoring for a season.

But with Alfredsson gone, a new era needed to begin. On September 14, 2013, we learned the man up to the challenge.

A few days earlier, head coach Paul MacLean outlined five players in his leadership crew: Jason Spezza, Chris Phillips, Marc Methot, Chris Neil, and Craig Anderson. Everyone but Anderson was considered for the captaincy. Even Erik Karlsson was considered at one point, before management decided he was too young for the role. Ultimately, it went to Spezza.

Chris Phillips and Chris Neil will be the alternate captains.

Jason Spezza has been a member of the Ottawa Senators since being drafted 2nd-overall in 2001. He's established roots in the city, starting a family in Ottawa, and also an annual charity golf tournament. He's respected by his teammates. He seemed a natural fit. The team wants him here for years to come. He was ready to become the face of the franchise.

Plus, we can now refer to him as Captain Giggles. 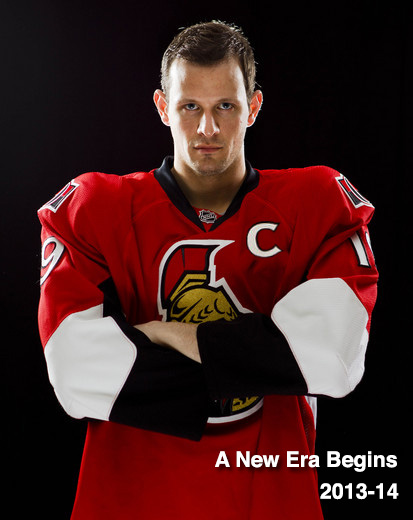