A turbulent offseason has the Ottawa Senators facing some questions. Here are a few.

Barring injury, the majority of Ottawa's top two lines are filled out. The five forwards who will soak up the most minutes are, in some combination, Jason Spezza, Kyle Turris, Bobby Ryan, Milan Michalek, and Clarke MacArthur. The sixth player was supposed to be Daniel Alfredsson, but as has been beaten to death by now, he chose to take his talents to Detroit--and that leaves a hole that needs to be filled.

Who the candidates might be to fill that spot have also been beaten to death, so we're not going to re-hash those either.

Instead, let's look at what that player needs to replace. It's unlikely they'll be able to fill the leadership hole created by Alfredsson's departure, but what about production?

In the 2013 season, Alfredsson was Ottawa's third-highest scorer, behind only Turris and the departed Sergei Gonchar. His 26P (10G, 16A) in 47 games is a pace of around .55 points per game. Over 82 games, that would result in a winger scoring 45 points.

More important than production, though, is awareness. The kind of winger Alfredsson was for Turris does not always translate to the scoresheet, but much as he did for Erik Karlsson in his first two years, Alfredsson played the role of safety blanket for the young center. Consider this example:

That sequence bears careful examination. It begins with a decent pass to the blue line by Gonchar. The pass hits Turris' stick, but Turris is forced to turn his back to center ice to receive it on his forehand, meaning he's lost any real forward momentum. Turris is lucky there are no defenders close by, or else he would have gotten laid out. Regardless, in the time it takes Turris to turn around and begin his stride, the Carolina Hurricanes' Chad LaRose is able to close the gap and initiate a check. Turris does not have any momentum to escape it and no space to build up any speed, so he does his best to fight off the check (his offseason strength training coming in handy) while spinning away from LaRose through the neutral zone. The end result is that Turris is able to maintain possession of the puck while sacrificing speed and position, leading to him being knocked off his skates.

This is a turnover waiting to happen, though Turris' options were severely limited. He was not in a position to safely advance the puck to Mika Zibanejad, waiting on the opposing blue line, and he can't pass the puck backwards to either Gonchar or Chris Phillips--both passing lanes are filled with Canes players staring their backchecks. There's not much for Turris to do except try to fight through the check and advance the puck himself.

However, Alfredsson, from his own half wall, recognizes this, and joins the rush--which is his job as a winger. But Alfredsson doesn't over-commit to the play. He's mostly gliding, matching Turris' momentum so as not to go offsides should they cross the blue line, and leaving himself in position to either initiate a forecheck or quickly wheel around and backcheck should a turnover occur.

Of course, there's a third option as well: Alfredsson is in position for Turris to relieve the pressure on himself with a pass--which is exactly what happens. The ridiculous goal that follows is just the kind of thing that makes us agonize over Alfie's departure, so we're not going to talk about it, but it's essentially a free assist for Turris, and Gonchar gets a point for doing nothing more than clearing the puck. Whatevs, Sergei.

The key here is that Alfredsson positioned himself to support his center no matter the outcome of the play. Compare that with Zibanejad, who upon not receiving a pass and seeing Turris in trouble, skates directly towards him in what appears to be an attempt to help out. This isn't a knock on Zibanejad--helping his center is obviously the right instinct, and a blind backhand pass is unlikely since Turris isn't wearing #19--but his decision leaves an open lane should a turnover happen, and should the Canes be able to hit that lane, the result would be a one-on-one situation between Eric Staal and Phillips. 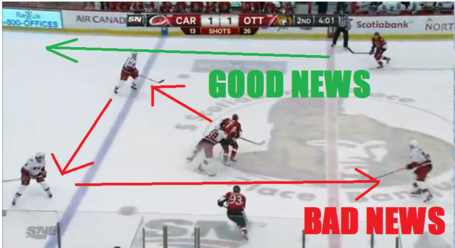 To his credit, Zibanejad sees Alfredsson on the other wing and immediately breaks off his angle in order to move up the ice to drive the net. It's not what you'd call a major mistake by any definition, and the ending is a happy one for Sens fans. But it could have gone much differently. It didn't because of two things: Turris' upper-body strength and Alfredsson's awareness. The outcome of the check is nearly irrelevant--Alfredsson was going to be able to support Turris no matter what.

Now, this play happened later in the season, as evidenced by the date, and also the fact that Turris is facing the opponent's top line. Life on the second line should be easier for both Turris and his teammates. But it's important to remember that Turris is still young, and behind in his development. There will be times when he gets into trouble, and the best player to play alongside him is not necessarily the one who can put up the most points, but the one who is able to complement and support him in all situations.

For the last open spot in the top six, complete game awareness might be more valuable than pure offensive prowess.