It seems as if Stephane Da Costa has been around forever, but in reality it's only been a scant two-and-a-half years that he's been in the Ottawa Senators organization.

As an overager fresh out of college, Da Costa was signed as an unrestricted free agent instead of being drafted. As was status quo for college free agents, Da Costa signed a two-year contract and then had the first year burnt up immediately by playing a few underwhelming games at the end of the season.

But the next season, Da Costa made the Senators' lineup straight out of camp after a strong showing during the summer's rookie tournament. Da Costa scored his first NHL goal in only his second game of the season. Still, as described in an article with Sport.fr, just making the NHL was an achievement for a French-born forward. Sport.fr's description of the leadup to the goal, via Google Translate:

From the second game of the season, the French international has been a welcome gift cashing against Toronto a terrible checking who toured the North American continent.

As part of France's First Family of Hockey (I assume), Da Costa is the youngest member of a dangerous trio... 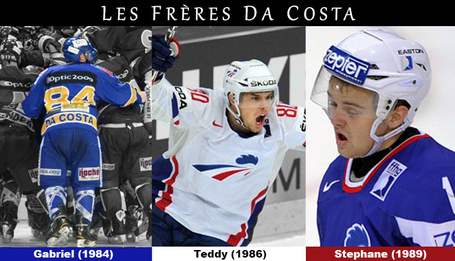 ...of whom he is the undisputed superstar. Brother Gabriel isn't even a member of the French national team, and actually plays in the second-tier French league. Brother Teddy, however, is one of the better players in the Polska Liga Hokejowa. And just in case you wondered if Stephane's diminutive head size was genetic, here's him and Teddy: 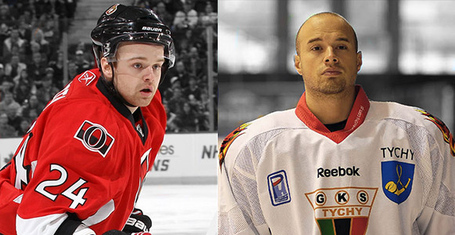 Yes. It probably is.

Despite the enormous rash of injuries up on the big club, Stephane Da Costa only played nine games in the NHL this season. Instead, he spent the majority of the year in Binghamton where he tied for the team lead in scoring after finishing fifth the season before. Yet even in only nine NHL games this season, he still had more goals than Peter Regin.

Da Costa possesses great offensive abilities - great passer, a rocket of a shot - but has yet to put up points consistently as a pro. Since leaving college, he hasn't been able to cracking being a point-per-game player in his professional career. Playing against lower-level competition until turning 17 and moving to North America likely stunted some of his development potential, but Da Costa is still a heck of a skilled player. A little more seasoning and he'll likely be at worst a top-tier AHL offensive player.

Ultimately, his role as the gifted, smaller forward who can play chippy may have been snatched from him by Cory Conacher. So how long he stays with the Senators is a mystery. He might get some time with the big club next season, but his newly-signed two-way contract suggests Tiny Tête will be a mainstay with Binghamton.

If I had to make an uneducated guess: Da Costa doesn't stay a Senator long-term. There's too many players ahead of him, but he's good enough to play in the NHL somewhere. He'll be picked up at an upcoming expansion draft and become a third-line centre for the new Quebec Nordiques, Seattle Thundercats, or my personal hope, in Portland as a member of the Oregon Trail.

Until then, he has 35 games to get one more point and match Bill Muckalt's offensive output as an Ottawa Senator. Remember Bill Muckalt?