Silver Nuggets: What to Wear to the Heritage Classic Edition

Share All sharing options for: Silver Nuggets: What to Wear to the Heritage Classic Edition

With the recent NHL confirmation that the Ottawa Senators will visit B.C. Place in March to take on the Vancouver Canucks in the 2014 Heritage Classic, immediately some began to wonder what uniforms the teams will wear. A rematch (of sorts) of the 1915 Stanley Cup championship, Scott at 6th Sens has already suggested the Sens wear a version of the original team's 1915 jerseys, featuring a barber-pole, Union Flag, and Red Ensign. This jersey would adhere to the tendency in recent outdoor events of teams wearing vintage designs, but these games often feature new, retro-look uniforms. The Senators already have a great heritage jersey, but the team would be foolish if it missed an obviously opportunity to sell merchandise with a one-off design.

Complicating matters would be the jerseys the Canucks choose to wear. Normally, Vancouver and Ottawa have colours that are distinct from each other. However, the Canucks wore heritage jerseys inspired by the Vancouver Millionaires last season and if the team wears something similar in March, the Canucks' maroon might force Ottawa to wear white jerseys.

With these considerations in mind, which design would you like to see the Senators wear during the Heritage Classic? 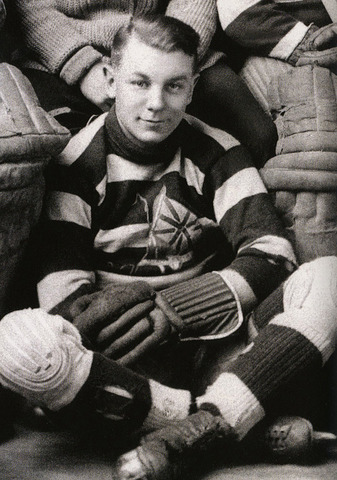 3) This updated white jersey design from Matt Marczel via Icethetics 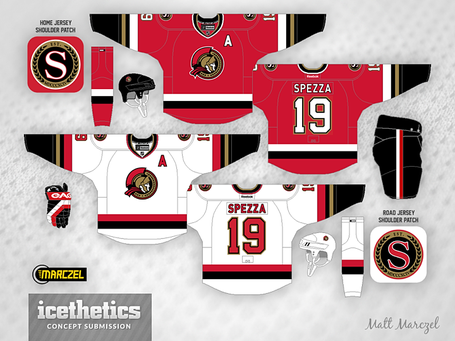 4) This red heritage jersey from Justin Cox via Icethetics 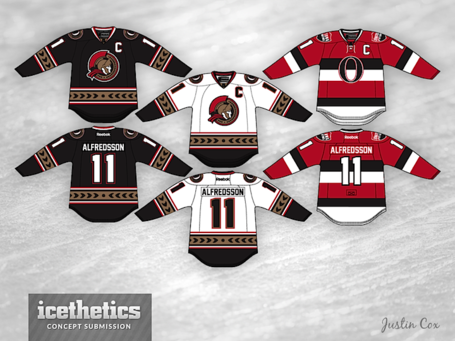 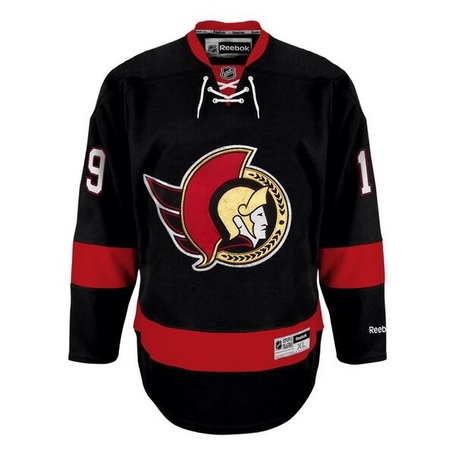