In light of the Goalie Guild's recent apology, we need to acknowledge some of our own deleted posts.

Share All sharing options for: Silver Seven owns up to the posts we've deleted over the years

There was a big stir in the blogosphere recently as it came to light that Justin at the Goalie Guild had deleted several old posts that, with the benefit of hindsight, did not look so good (like saying he didn't think future Vezina winner Sergei Bobrovsky would work out well in Columbus).

Justin apologized, and it's time we did the same ourselves. After all, we've also been guilty of trying to cover up our tracks once or twice, and it's not something we're proud of. But in the interest of transparency, it's only right that we compile a list all of those posts we made over the years that we deleted once it turned out that their basic premise was undeniably false.

Sens get the steal of the expansion draft in Mark Laforest
After inaugural game, we're confident Senators will be a dominant force this season

Daigle is right - no one will remember Chris Pronger

Alexei Yashin will go down as the best player in Senators history
Sami Salo: Man or Beast?
Daniel Alfredsson a poor choice to captain this team
Mathieu Chouinard, goalie of the future

Tom Barrasso: The Answer
Why the Maple Leafs won't beat the Senators in the playoffs this year
Mathieu Chouinard, goalie of the future

Dominik Hasek: The Answer
Brian Lee will be the cornerstone this team needs
Go ahead, buy that Dany Heatley jersey -- he's here for good

Martin Gerber: The Answer
In the new NHL, Wade Redden is more valuable than Zdeno Chara
Scotiabank Place: The name of our arena for the next 15 years!

Pascal Leclaire: The Answer (oops, we forgot to delete this one...)
Cory Clouston, visionary coach
Alexei Kovalev will be a fan-favourite
Mike Comrie: Second time's the charm

Craig Anderson: Not The Answer

Lockout won't end; season cannot be saved
Canadiens should give Senators all they can handle thanks to calm, collected coach and great goaltending

UPDATE: One of our keen readers tracked down a screenshot from an old article written by none other than Peter himself. Looks like Peter was into Geocities. 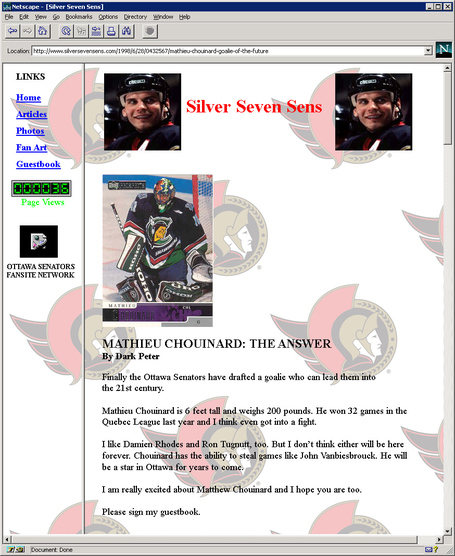