A funny thing happened on the way to the Calder Trophy...

Remember when all of our rookies were going to win the Calder?

Share All sharing options for: A funny thing happened on the way to the Calder Trophy...

Jakob Silfverberg was going to win it.

Mika Zibanejad was going to win it.

Remember all of that during the dog days of the lockout? (DAMN YOU, BETTMAN!) Remember how Silfverberg was coming off of a dominant season in the Elitserien, and had the advantage of adjusting to the North American game in the AHL while the millionaires and billionaires fought their latest pointless squabble?

Well... that didn't happen. Florida Panthers forward Jonathan Huberdeau won the trophy, beating out fellow finalists Brendan Gallagher of the Montreal Canadiens and Brandon Saad of the Chicago Blackhawks. Good year to be named some variation of Brendan, I guess, as Brenden Dillon of the Dallas Stars also got votes.

So, the vaunted talents from Sweden didn't get it done. Or did they?

While we don't get to see who voted for which player on the ballots, we do get to see how the votes went, and in looking through the voting, a really interesting tidbit came up. See if you can spot it: 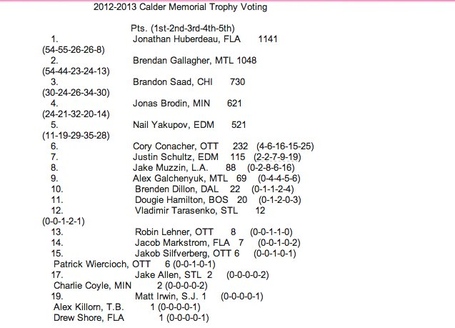 How about that? While the Senators didn't have a finalist, they did have more players in the voting than any other team. Here's the breakdown if you're too lazy to count:

Over the past few days we've obviously talked a lot about Zibanejad, but it's still encouraging to see other names on this list. After all, most of our excitement comes from the prospect of, well, prospects. The Senators have very few cornerstone players in place, and barring a blockbuster trade, don't really have any on the horizon. The franchise's future success hinges on the development of its prospects into not just NHL players, but good NHL players.

Newly-minted Jack Adams winner Paul MacLean intimated as much when asked about the award and the adversity his team faced this year:

As it turned out, our scouting staff has done a good job of identifying young players. The fact we were forced to play them was a big part of it. But I think the quality of the players allowed us to play them. That was really a bigger part of it than anything I did or anyone else did, was the quality of our players that we could put in.

In fact, much of the praise we have given to general manager Bryan Murray since the start of Senate Reform has been over the ability of he and his staff to restock the cupboards. The hope of a brighter future has been what he's been trading on--and what the fanbase has been buying into--since it became obvious changes on the team were needed. The Calder voting would seem to validate those hopes, if only a little bit.

Now, most of Cory Conacher's votes probably came from the stats generated by his stint in Tampa Bay, where he was tearing it up alongside some guy named Steven Stamkos. And it's not like Silfverberg, Lehner, and Wiercioch amassed a ton of votes here. It's very possible that this is just a reflection of home-team bias from local Ottawa media. However, each of those three got one third-place vote, which means at least three media members cast separate votes. Without knowing who cast the votes, we can only speculate. Still, looking at the vote breakdown, either Ottawa is the only city with shameless media or those players caught the eye of at least one of the other 180 members of the Professional Hockey Writer's Association. Either one is possible.

However the votes wound up happening, they don't really diminish the fact that four of Ottawa's young players had noteworthy seasons. Robin Lehner displayed such dominance that he forced his way on to the NHL roster. Patrick Wiercioch was second among rookie defensemen in scoring, and first among them in overcoming career-threatening injuries. Concher cooled off while adjusting to a new team but still showed some flashes of clutch ability. And Silfverberg showed he has a shot that can beat any goalie in the league.

And though a Calder vote doesn't guarantee future success, it does add a note of hope to the career path of Ottawa's prospects--a simple validation that they can play and succeed at the NHL level. After all, that's probably the first step towards becoming the good NHL players the Senators project--and need--them to be.