Much of Friday was spent dealing with the aftermath of the Gryba-Eller affair. While news trickled out that Lars Eller had thankfully been released from hospital, much of the hockey world was waiting to hear if the Ottawa defenseman would be suspended for his controversial hit. Most outside of Montreal were surprised when Gryba received a two-game ban late in the afternoon. The hours waiting for Player Safety guru Brendan Shanahan's decision weren't wasted; coaches Paul MacLean and Michel Therrien exchanged several verbal barbs designed to protect their players and throw attention away from team failings. But ill will is not just the simmering rage over the Gryba-Eller affair; both franchises are finally ready for this. They've never been good at the same time. Montreal is riding high after a last to almost-first transition and a belief that the glory years might soon return. Both the Senators franchise and the team's fan base have a confidence they've never had before; a confidence exemplified by a 22-year-old defenseman, a toothless goalie, and the coach with walrus whiskers. Where previous teams wilted in the face of adversity, this Sens team merely shrugs it off as injury after injury threatened to derail the team's season. After 20 dormant years, a Senators-Canadiens rivalry has emerged, fully formed and boiling over in one short day.

The Gryba news overshadowed some key line-up moves. In addition to Eller, Montreal's Brian Gionta and Max Pacioretty were sidelined because of injury and Colby Armstrong would draw back into the team. MacLean made two curious decisions: to replace the suspended Gryba with Andre Benoit instead of Patrick Wiercioch and to drop Cory Conacher in favour of Matt Kassian. Ottawa's coach sent Zack Smith, Kassian, and Chris Neil out to start the game, but there were no fireworks on the first shift. Temperatures flared three minutes into the game when Brendan Prust landed a big hit on Jared Cowen behind the Sens' net. While fighting for the puck in the corner, Canadiens forward Brendan Gallagher slew foot Sergei Gonchar and as the Ottawa defenseman was falling, he clip Gallagher with a high stick. Despite Gallagher's infraction, Gonchar was the only player penalized and the Canadiens power play went to work. The Habs had several good chances, but Craig Anderson continued to shut the door.

Midway through the period, Prust continued his disagreement with Anderson, as he appeared to spear the Ottawa goalie, and took an interference minor. While the Senators didn't score, Latendresse had a good chance and the power play looked much better than that horrific Game 1 example. After PK Subban got involved down low in Ottawa's end, Montreal had a flurry of chances on Andy. Kudos to Andre Benoit: playing his first NHL playoff game after three weeks in the press box, Benoit knocked Travis Moen away from Andy and the Ottawa defenseman managed to draw a penalty as well. Ottawa's second power play effort was abysmal, with zero shots on goal. A Daniel Alfredsson initiated 2-on-1 led to a nice scoring chance and another Ottawa power play, as Subban was forced to take out Benoit who had jumped into the rush. The power play ended the way Ottawa's second man-advantage ended, without an Ottawa shot on Carey Price. The period finished in a scoreless draw.

Period two began with Ottawa pressuring the Canadiens in their own end. But a costly and avoidable mistake from Erik Karlsson resulted in Montreal's first goal. An ill-advised backhand pass was intercepted by Ryan White and knocked passed a surprised Anderson. The goal was followed quickly by the Habs second goal, a rebound potted by Gallagher right after a great save by Price on Kyle Turris. The two quick goals made Ottawa's task even more difficult.

A great shift from Andre Benoit and a delayed penalty got Ottawa back in the game. Benoit pinched at the right time, won the puck and drove to the slot to take a shot on the net. Ottawa drew a penalty on the play and Benoit and Phillips passed the puck back and forth, ensuring the Sens got an extra attacker out. Taking advantage of a prone Prust, Phillips fired a shot passed Price (tipped by Michalek), as the Canadiens goalie was too concerned with Pageau in front.

Near the end of the period, Colin Greening knocked Prust into the boards from behind and to the displeasure of the Bell Centre faithful, Prust was penalized for closing his hand on the puck. Ottawa went to the powerplay once again. However, this time the Sens managed actual shots on goal and scoring chances and the Habs had to rely on Price to keep the Sens from tying the game up. With a minute left in the period, Michael Ryder scored a backbreaker: he put a loose puck past Andy and gave the Habs a two goal lead going into the second intermission.

The third period started with the Sens pressuring the Habs in their own end. Matt Kassian took an interference penalty midway through the period but Ottawa's penalty killers were up the task. With ten minutes left in the game the hitting increased from both sides and it appeared the tone for Game 3 was being set. Nothing of note happened for the rest of the game and it ended with everyone pairing up for some punching and grabbing. Montreal wins 3-1. Series tied 1-1.

If Ottawa had been at home with last change, would MacLean have picked Wiercioch to fill Gryba's spot? As much as I want to see what Patrick Wiercioch can do to help Ottawa's offense (especially the power play), it's going to be hard to take Benoit out. He was responsible defensively and had a great shift which led to Ottawa's only goal and an assisted for Benoit.

For a kid who was only called up in April, he's fit right in down the stretch and into the playoffs. Pageau's strong play led to him centering Ottawa's top line for a while in this game.

Zibanejad played almost 16 minutes tonight and led the team with 5 shots while holding the Canadiens at bay when his line was on the ice.

I don't think I've seen Karlsson play a worse game in the NHL than he played tonight. Even during his rookie season when he struggled defensively, his offensive production more than made up for it. Not only was Karlsson directly responsible for the Canadiens first goal he made several noticeable mistakes at both ends of the ice. It seems clear now that he's not 100% healthy/ready; he looks much slower than usual (he was beat in a foot race by Rene Bourque) and it's making a difference during breakouts. Unlike some of CBC's intermission panelists, I don't think his game tonight was a reflection of the Habs getting a few checks in on Karlsson. I think he's just not 100% Karlsson right now and can't do everything he usually can. He looks like a player who knows that he is Ottawa's game changer and is pressing to be that player. Fatigue may have been a factor in his performance: after playing over 29 minutes in Game 1 as the Sens were reduced to five defensemen last night, Karlsson played even more tonight (29:36 TOI). Some of that can be attributed to Ottawa's significant power play time. Gryba's suspension was felt here too. MacLean has shown a willingness to give Gryba significant minutes (he averaged over 20 minutes per game this season); Benoit and Wiercioch average 4-5 minutes of ice time less than Gryba per game. Benoit played 12:35 tonight and Karlsson played almost a minute on the PK. While I think Benoit had a good game, he's not going to eat up minutes and guys like Karlsson will be picking up those minutes.

I noticed Michalek, but only because I was actively looking for him. If you're not playing "where on the ice is Milan Michalek?" he's been invisible so far this series. With the Senators struggling offensively, they need players like Michalek to step up their game. Michalek did score the only goal tonight (credited with the tip-in on Phillips' shot) but you'd only know that if you read the box score (I did, Big Rig Brewery did not).

Continues to be terrible. Some of Ottawa's man-advantages generated shots and even a few scoring opportunities. But on a couple PPs Ottawa couldn't even manage a shot on net. The three PP chances in the first period were a real opportunity to get ahead of a depleted Montreal line-up but the Sens couldn't capitalize. Part of the problem was the play of Erik Karlsson, but something's got to change if Ottawa wants to win this series.

Price was a Sens Friend for his third period effort in Game 1, but did everything he needed to do to get the win tonight. The Sens had their chances, but when they did Price shut the door (especially on a good chance by Turris in the second period). It was a gritty performance for the much-maligned goaltender; he even lost two teeth when he took a teammate's skate to the head (Kevin Weekes made a good point during the broadcast: both Andy and Price should call their mask makers, something's not working with all the missing Chiclets).

The kid's irritating. He's doing his job well. The winger doesn't turn 21 until Monday, but his line has looked composed so far. Plus, he added his second goal in as many nights in Game 2.

Prust called MacLean some names this afternoon to deflect attention from Price's poor third period performance. Canadiens fans loved it (I think Ottawa fans did too) and so did the media, but he also backed up his words with a strong game. He was flying and had several noticeable hits. Yes, he took two dumb penalties, but that doesn't matter much when the other team doesn't score. He continued his battle with Craig Anderson: Prust wasn't penalized for an obvious high stick in Game 1, but was penalized for an apparent spear in Game 2. If Prust can successfully get under Andy's skin, it will help Montreal's chances going forward.

Going into the series, the Senators would have been happy to get a split away from home. But after a victory in Game 1 and with Montreal's depleted Game 2 roster, Ottawa should be disappointed with this performance. The Sens had an opportunity to take a commanding lead in the series and came up flat. 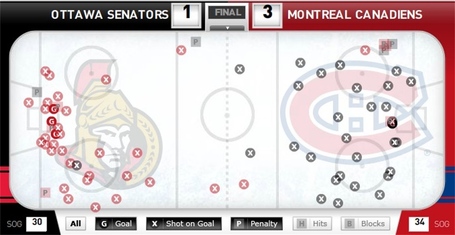