It's infuriating to watch.

Share All sharing options for: Mistakes doom Senators in 4-3 loss to Penguins

In order to beat the Pittsburgh Penguins, the Ottawa Senators have to play a near-perfect game. For the second time in two tries, they didn't, and it resulted in them being on the wrong end of the scoreboard yet again.

Once again this was a game that left you saying, "If the Senators could just be a little better, they could beat the Penguins."

The problem is that they have to be a little better everywhere at the same time, because their opponents are just too talented to give them easy opportunities, and that's what the team keeps doing. Last game, despite good 5-on-5 play, the penalty-killing unit and power play unit didn't come through and the team lost. This game, despite good efforts from the penalty-killing and power play units, goaltending didn't come through and the team lost.

Anderson easily had his worst game of the year for the Sens, and it came at exactly the wrong time. This was a game where the Senators desperately needed Anderson to give them a chance to win, because they almost played well enough to win. But Anderson instead acted as thinly-veiled Sens Killer Sidney Crosby's personal shooting target, as Crosby lit up Anderson for a hat trick. Anderson lasted just 21:05 in this game, and he wasn't pulled because the team needed a spark--he was pulled because he was off. The Senators made the playoffs on the strength of their goaltending, and to have it falter--not just regress, but falter--at this point is terribly frustrating.

Of course, it doesn't help that the player who tore Anderson up is Crosby, who happens to be the best player in the world. Anderson misjudged how quickly he could close his five-hole against the speed of Crosby's shot on the first goal, and that obviously stuck with him for the second shot, where he tried to anticipate what Crosby would do instead of just playing the shooter. Cheating away from the near post, expecting a pass, Anderson instead invited Crosby to shoot. The third goal was simply a rocket that no goalie would have a realistic chance of stopping. But at that point, the damage was done and Anderson had to go.

Both Lehner and Anderson faced 21 shots. Anderson stopped 18, Lehner 20. Lehner threw out a huge save early in the second on Jarome Iginla, and it really seemed to give the Senators momentum. Lehner was everything Anderson wasn't: Calm. composed, efficient. It's no surprise the Senators were able to claw back within one goal. It's like confidence matters or something. Still, Anderson is the goalie that will start game 3, and there shouldn't even be a debate about that. The good news is that Lehner proved yet again that he's going to give the Senators an outstanding chance to win the games he starts next year. The Senators have two starters.

Held pointless in game one, Crosby single-handedly destroyed the Senators tonight. His destruction of Anderson has already been documented, but he simply toyed with thinly-veiled Sens Zero Erik Karlsson throughout the night. Evgeni Malkin picked up the slack in game one, and then Crosby does all the damage in game two. How is that fair? Who can shut both guys down?

Though the Senators only got two power plays and gave up six--more on that later--the units that were ineffective in the first game of the series had a major rebound in this one. The power play unit took care of business, scoring a goal by winning a faceoff cleanly, moving the puck quickly, and taking a shot before Tomas Vokoun got set. Goal. And though the penalty-killers gave up a goal--the Crosby rocket--holding them to one in six attempts is no joke. The Penguins had been operating at 36% in the playoffs, and were held to 17% on the night. You simply can't ask for more than that against this unit.

Greening scored a goal and almost had another, but for an outstanding toe save by Vokoun. Greening likely would have notched an assist on the play, as Jakob Silfverberg was trailing and the puck was loose and the net was open, but Greening was unable stop, and dislodged the net, ending the play. He led the team with five shots, and was only credited with two hits, but he was a physical force all night long--at one point absorbing a hit from the 245-pound Douglas Murray and simply not moving. The frustrating part about Greening is that he's unable to play like this on a consistent basis, but when he does, it's fun to watch--and he's delivered in both games against the Penguins so far.

Alfie played a great game tonight, helping get that power play goal. And if this were seven years ago, he would have dragged this team over the hump and into the series. But he's not that player anymore, and he can lead the team, and he can contribute to the team. What he can't do is win games by himself. There are other players on the team who need to do that now. Unfortunately, they're all hurt.

Speaking of hurt, Karlsson sucked tonight. He only played 15:37 and that's because he wasn't very good. But let's be clear: Karlsson is struggling because he's not healthy, not because he suddenly got bad at hockey.

Damned if you do: Guillaume Latendresse

Latendresse has been in head coach Paul MacLean's doghouse for a lack of aggressiveness and physicality. His first game back in the lineup and he tries to show those traits, only to get called for boarding Malkin, who went down fairly easily for such a big guy. If Latendresse doesn't hit, he's a scratch. If he does hit, he's putting his team on the PK. Either way, he's earning the coach's ire.

This is what it all comes down to. Execution. Whether play with the puck, inaccurate passes, poor reads, closing the five-hole more quickly, knowing when to engage, you name it, this is the difference in the series. The Penguins are too talented a team to give opportunities created by mistakes, and that's what the Senators continue to do. And a lot of credit for that has to go to the Penguins, because they've recognized they can pressure the Senators into mistakes. It feels like there's always two guys on the puck carrier, always someone in a passing lane, always someone there to lift a stick at the wrong time. And why wouldn't they take those risks? They keep paying off.

The Senators' failure to execute properly is reflected in the penalty differential. Sure, we can whine about the Penguins drawing the calls because they have the superstars, but we can't change that. And whether it's fair or not, it's reality. The team has to recognize the way the games are going to be called and adjust accordingly. Blaming officiating is a copout--the Senators must adjust and execute.

Execution is the difference in the series. If it doesn't change--no easy task considering the skill of the opponent--the rest doesn't matter. 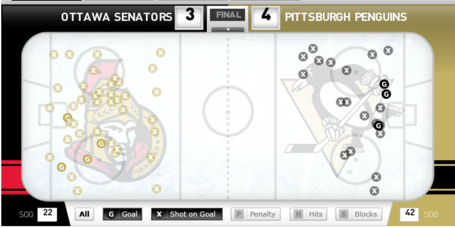