You might not have guessed it at the start of the season, but Mika Zibanejad is fifth in team scoring in the midst of an impressive rookie campaign.

Share All sharing options for: The numbers behind Mika Zibanejad's impressive rookie campaign

At the start of the season, some fans were speaking in not-so-hushed voices about a Swedish rookie joining the Senators as a possible Calder candidate. They were talking about Jakob Silfverberg -- who has had a tremendous season himself -- but it seems that maybe a little more attention should have been thrown Mika Zibanejad's way.

In six fewer games played than Silfverberg, Zibanejad has more points than his countryman and is currently sixth in points-per-game among rookies. That's a better points-per-game average than last year's first overall pick Nail Yakupov, who is only 6 months younger than Zibanejad and entered the league to considerably more hype.

It's not that Zibanejad's pedigree didn't suggest that he could put up this season's point totals -- he was a sixth overall pick, after all -- it's that his history simply suggested it would take longer. Zibanejad has had several injury and health issues in the past year and a half, and despite his high draft position, this 19 point season is his best production as a professional hockey player: he managed just 9 points in 26 SEL games in 2010-11, and 13 points in 26 SEL games in 2011-12. In fact, Zibanejad's point-per-game pace this season in the NHL is higher than it was in the 23 games he played in the AHL before he was called up, which could be due to linemates, health issues, or adjusting to the North American game.

What's perhaps most impressive about Zibanejad's point total -- 19 points in 32 games -- is that he's doing it with very little icetime. Indeed, Zibanejad is 20th in TOI/G on the Senators, but leads all teammates other than Cory Conacher in points per 60 minutes, and it's not even close -- Zibanejad gets 2.43 points for every hour of icetime, while the next highest Senator is Colin Greening with 1.48. Silfverberg, no slouch in the department either, is at 1.46. Zibanejad has also been a model of consistency -- outside of a 6 game point drought near the start of the season, he's only had one stretch of more than two games without a point. That's pretty impressive for a rookie playing 13:21 a game. He's also not succeeding through an unsustainable inflated shooting percentage: he's scoring on just 8.5% of his shots, which is 11th on a team with the fourth-worst team shooting percentage in the league.

Some of the reason for Zibanejad's success can be found in coach Paul MacLean's deployment of the youngster. Zibanejad usually plays against the opposition's weaker lines and he starts 63% of his shifts in the offensive zone, which gives him the friendliest zone start percentage on the team by a wide margin (as evidenced in this player usage chart generated by Hockey Abstract): 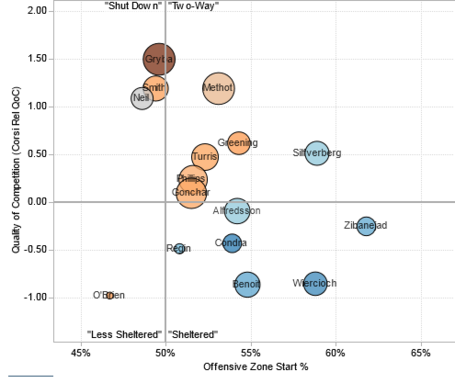 Now, this shouldn't be seen as criticism of Zibanejad, as it's not uncommon for coaches to shield their rookies. Jonathan Huberdeau, Brendan Gallagher and Mikhail Grigorenko all have even more favourable zone start percentages than Zibanejad, and yet Zibanejad actually finishes more of his shifts in the offensive zone than any of those three.

The strangest thing about Zibanejad's season is how quietly he's been doing this. If you had asked me for the Senators' top 5 point producers before I researched this article, I probably would not have listed Zibanejad. But if you take a look at the team's point leaders, Zibanejad is sitting comfortably at number 5, only one point behind his countryman Daniel Alfredsson. If he can have this strong of a rookie season without fans of his team taking notice, one can't help but look forward to the days when he's impossible to ignore.

Note: Most of the stats from this post were sourced from http://www.behindthenet.ca.