The Ottawa Senators dominated in the shots department, but fell short where it matters most: Goals.

Share All sharing options for: Senators fall 2-1 to Panthers for fourth straight loss

The Ottawa Senators road trip from hell continued on Sunday evening, and the team lost a game that they probably deserved better from. They dominated the Florida Panthers in shots by a 41-17 margin, but still lost (in regulation, of course) by a 2-1 score to the worst team in the Eastern Conference. In the process, they made Scott Clemmensen look like a world-beater.

The bad news is that the gap the Senators had built up on their conference rivals is withering away as Ottawa continues losing games. The good news is that, oftentimes, teams lose games they should win as their fate is turning around. Ben Bishop won't make it easy on his former teammates when his Lightning play the Sens on Tuesday night, but the team knows that they can't keep losing games and hope to hold on to their playoff spot. We'll see their mettle in Tampa next week.

Ottawa started the game pretty well, outshooting the Panthers 11-6 in the first and scoring the opening goal--the climax of a sweet tic-tac-tap-in scored by the Calder Line when Mika Zibanejad did the hard work, Jakob Silfverberg made the sweet set-up, and Cory Conacher easily popped in the pass. They made it look easy, but it didn't stay that way.

For the second frame, the Sens outshot the Panthers by an even greater margin of 14-4, but Marcel Goc scored the only goal of the period to tie the game. The Ottawa play-by-play tandem of Denis Potvin and Dean Brown tried to attribute the shot-clock dominance by Ottawa to an early-period fight between Matt Kassian and George Parros, but I doubt that very much; the Sens controlled the play for most of the game, and that continued in the third where Ottawa fired 16 shots at Clemmensen to Florida's seven.

But just like the previous period, Florida scored the only goal of the third. With Sergei Gonchar serving time for a holding penalty (one he took serious exception to), Dmitry Kulikov fired a snapshot that beat Craig Anderson and gave Florida the lead. Ottawa controlled the puck and managed some good zone time, but didn't really look desperate; they actually looked pretty chill. Maybe their #PeskySens label is getting to their heads?

I'm not sure what it might take, but it looks to me like the Senators need a bit of a wake-up call. The attitude and execution on the ice during this road trip has been hugely inferior to what it was during the 10 or so games immediately following the Erik Karlsson injury. It might be the line combinations, it might be the inability to confidently roll four lines (Kassian played only 6:28 tonight, Peter Regin played only 8:57), maybe it's regression, or maybe it's just a number of cold streaks striking simultaneously (Kyle Turris had six shots on net, for crying out loud). Whatever it is, though, Paul MacLean and his gang need to get the skaters snapped out of it to avoid a 2008-09-esque late-season back-in to the playoffs.

Sens Killer: Scott Clemmensen
Clemmensen probably isn't as good as the Sens made him tonight, but you can't argue when a guy stops 40 of 41 shots in a game. The only goal that beat him would have beaten just about any goalie in the league, and he was there to keep Florida in the game through the first period, and to hold it tied through the second. As MacLean said, the Sens "got goalie'd."

Sens Hero: The Calder Line
These guys are exciting already, and if we're lucky we'll get to watch them make things happen for the next 15 years or so (that's crazy to think, isn't it?). The mixture of styles is something else: Zibanejad with some grittiness, Silfverberg with the puck-control, and Conacher with the buzzing and finishing. It's a potent line, but considering how awful the first line has been offensively, they'll have to produce even more if the team's going to win more games.

Calibration Needed: Patrick Wiercioch
Weershock had six of his shots blocked on the night. COME ON, MAN. No wonder the powerplay was a...

Sens Zero: The powerplay
Zero for five with the man advantage against the worst penalty-killing team in the NHL is not acceptable. It wasn't even just bad luck; the Sens managed just six shots on the powerplay, too. Awful.

Honourable Mention: Craig Anderson
It's not easy for a goalie to return from injury and face only 17 shots, as counter-intuitive as that may be. I think on the whole, Anderson played a solid game despite how badly the shot chart below looks for him... 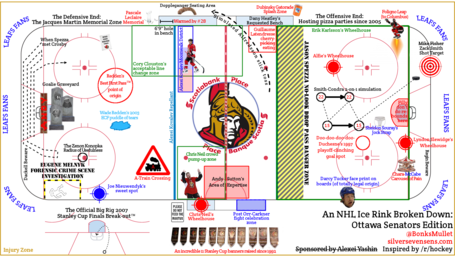 So few red dots in there!