Senators fall to the Sabres 4-2

Share All sharing options for: Senators fall to the Sabres 4-2

Tonight's game was anticipated for two reasons: Cory Conacher's first action as a Sen and the possibility that Craig Anderson might start for the first time since February. While Sens fans got to see Conacher matched with fellow rookies Jakob Silfverberg and Mika Zibanejad, we would have to wait at least one more game to see Anderson, as Robin Lehner got the start. After successfully killing an early Chris Neil penalty, the Sabres went ahead by a goal on a Luke Adam slap shot. Lehner didn't get properly set after losing his balance while misplaying the puck behind the net and the result was a shot he would usually save got past him. The Senators tied the game midway through the first period on a play started by a Jakob Silfverberg rush. After gaining the offensive zone, Silfverberg dropped the puck to Marc Methot; playing on his wrong side, the big defensemen put the wrist shot behind Ryan Miller. Ottawa's first power play followed shortly after, the highlight of which was Buffalo defenseman Mike Weber robbing a wide-open Sergei Gonchar with a shot block. As the period came to a close, Ottawa's offensive pressure mounted while Buffalo's physical play increased - including two big hits on Erik Condra. The period finished tied at one.

The second period got off to a sloppy start. With temperatures beginning to rise, Patrick Kaleta took a run at Methot and Ottawa went to the power play again on the charging call. While the Sens sustained pressure, the Sabres ultimately killed off the penalty. The Sens would pick up another PP when Tyler Ennis elbowed Erik Condra as the Senator skated through the slot. Yet again Ottawa failed to capitalize. While the refs penalized some infractions a lot of calls, several high-sticking infractions were missed, adding to the chippy play as the game continued. Neither team was able to get much going offensively and the period finished as it started, tied one-one.

The third period got off to an exciting start as Eric Gryba potted Ottawa's second goal with a wrist shot from just outside the faceoff circle after some nice work by the Zibanejad line. However, the lead was short-lived; Buffalo netted the equalizer less than two minutes later on a Steve Ott tip-in. The Sens got an excellent opportunity to go ahead when Cory Conacher drew an interference call but again the Sens power play was not up to the task. Daniel Alfredsson and Sergei Gonchar passed up opportunities to shoot and Ottawa was unable to really pressure the Sabres. While the Senators were able to kill off a marginal cross-checking call on Marc Methot, Buffalo took the lead shortly after the Ottawa penalty was over. Robin Lehner over-committed on the initial shot, which took a funny bounce off the boards, and was left sliding across the net trying to stop a second shot. His efforts were in vain, as Brian Flynn scored on the backhand. Just 12 seconds later, the Sabres scored an insurance marker, as Jochen Hecht put another backhand shot past a partially screened Lehner. In an effort to get back in the game, the Senators pulled Lehner with almost three minutes remaining in the period, but weren't able to convert.

Many Sens fans were wondering how Conacher would look in Sens colours and the answer after his first game was positive. He fit in well with new line mates Zibanejad and Silfverberg and was in front of the Sabres net making his presence known on both Ottawa goals. What's more, his penchant for drawing penalties continued which will be a nice plus when the Sens get their power play working. He played less than fourteen minutes, but his TOI increased each period as the game wore on. As he gets more comfortable with his new surroundings, his TOI should increase.

His line was on the ice for both Ottawa goals - Zibanejad had two assists - and the combination of Zibanejad, Conacher, and Silfverberg played well. After a slow month of February, Mika has picked up his play in the past month with 9 points in his last 10 games.

Gryba made an impact at both ends of the ice. First, he broke up a 2-on-1 with a diving defensive play. He also scored the Sens second goal to put them ahead early in the third period. Not a bad night for the rookie blueliner.

Lehner has been brilliant this season, but he wasn't tonight. Ottawa fans are used to Lehner posting stellar save percentages, but that wasn't the case in this game; he stopped 26 of 30 shots (.867SV%). It was an off night for the rookie and he probably wants to take back at least two of the goals Buffalo scored. Still, the occasional bad game is to be expected and with Craig Anderson's return, the Sens are still set in net.

While the officiating in this game was iffy at best, the Senators still received four power plays but could not capitalize on any of them. In fact, the power play generated very little pressure and needs to improve if Ottawa is to get back in the win column.

It took only 12 seconds for the Sabres to notch their fourth goal, and insurance marker, to cement the victory.

I didn't hear the "Sabre Dance" tonight and that's usually the only plus of playing Sabres in Buffalo. If they played it and I missed it, they should have played it louder. 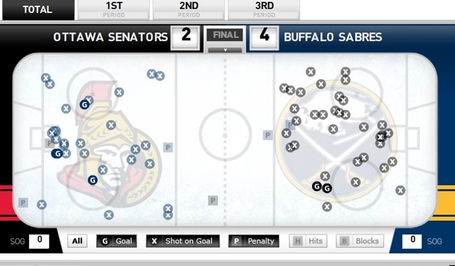