Karlssonwatch 2013 continued as the Philadelphia Flyers took on Erik Karlsson in Ottawa.

Erik Karlsson tried his hardest, but ultimately couldn't beat the Philadelphia Flyers, losing by a score of 2-0. The Flyers got goals from Jason Akeson and Jakub Voracek while Karlsson himself was held scoreless. Karlsson was also outshot on the night 25-7.

The night started off poorly for Karlsson as his unfortunate giveaway wound up on the stick of Claude Giroux, who fired a shot that handcuffed the Senators goalie, and Akeson was able to pounce on a loose puck and snap it top corner, glove side to give the Flyers a 1-0 lead over Karlsson. Karlsson was not at fault on the second goal, however, as he was on the bench for a much-needed breather--he played 27:46 on the night.

Karlsson also went 0-for-5 on the power play, squandering his best scoring chances of the night by aiming for the post instead of the net. Karlsson is now just 1-for-10 on the power play in his last two games, which is not terribly surprising: 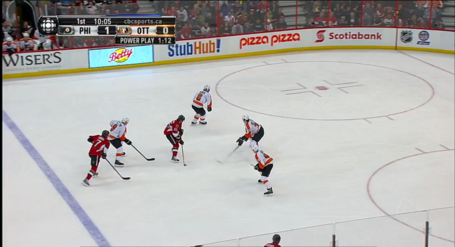 Wait, what? There are players besides Erik Karlsson on this team? I thought everyone else had just gone home and the team was just Erik Karlsson doing everything based on recent coverage of the team.

Kyle Turris had Ottawa's lone goal in this game, a wrist snipe from a nice little feed from Colin Greening, and the Senators had numerous other scoring chances--which is not surprising considering they had 44 shots on net in this game. Milan Michalek also hit a post and had three other glorious scoring chances, as did captain Daniel Alfredssson and Erik Condra. Turris also had another quality scoring chance the shift after his goal, so while this is another game Sens fans will probably lament as "making a backup look good," reality is a little different. At the very least, the team beat Steve Mason three times--and it's nothing but bad luck that only one went to the back of the net. The narrative is a little different if the score is 3-2, and then the other scoring chances that didn't quite go aren't quite as magnified as they are with a loss.

Still, this was a game where you never had a strong feeling like the Sens were going to win, and that's concerning. Passes were off all night, and players constantly had to take that extra second to corral the puck. They're supposed to be doing everything more quickly, but for the most part, teammates aren't giving each other a chance to execute quickly. One of the few times that happened tonight--Greening feeding Turris--resulted in a goal. The low team shooting percentage is an effect of the team's poor puck control.

It also seemed as if the team just wasn't able to find that extra gear in a game crucial to their playoff seeding against a team that was playing for pride. With one game left on the schedule, our own Ryan Classic breaks down the playoff possibilities:

Simple. Tomorrow might be the biggest game of the season, and the team still controls their own fate a little bit. An effort equal to what we saw tonight should have a positive result for a team that's been overcoming adversity all year long.

It's at least generating scoring chances again, so it's not like Karlsson's return hasn't helped improve it, but the power play is simply not good enough. There's no reason to mince words anymore: Head coach Paul MacLean needs to seriously consider relieving whichever assistant coach is running this unit of those duties. Mark my words--If the Senators advance in the playoffs, it will be because their power play started scoring goals again. If they don't, it will be because the power play continued its months-long run of ineptness.

Ridiculous saves tonight. What else can you say? Even if both posts found net instead, he'd have exited the night having saved 93.2% of the shots he faced. He was outstanding.

Who else? Aflie did his damnedest to get the team going, but he just can't do it himself anymore.

Facetious sarcasm aside, Karlsson did have a good game. Once again, he led the team in shots and playing time, but without the adrenaline of his first game back, his game was a little more shaky. It's a testament to his talent that shaky Karlsson is still Ottawa's best player.

Played well enough to give his team a chance to win. They didn't seize it.

Cowen had a pretty strong game. No major mistakes and asserted his size and strength in both ends of the rink.