Where is Your Sens Place?

Share All sharing options for: Where is Your Sens Place?

Only a select few Sens fans can regularly attend games at Scotiabank Place. Cost, distance, and life in general conspire to keep many of us away from SBP most game nights. There is something unique about attending a game live, your perspective is different, and you feel the energy of the crowd. But the arena is merely the site of action, architecturally specified and necessarily limited. It's the lot you park in, the gate you walk through, the seat you take. It's the rafters filled with hanging banners, the concourse with its cinderblocks and paint.

Maybe your Sens place is as simple as your living room, where you crash on the couch, pull on your jersey, and turn on the game. Maybe it's a bar or pub that's guaranteed to have the game on, the drinks pouring, and the food ready. Maybe it's a Sens Mile crawl, working your way through the Elgin Street hotspots, connecting with fans who were previously strangers, and recalling some heady spring nights in 2007. Perhaps it's the 417, being stuck in traffic, listening to the pregame on the radio. It could be an OC Transpo bus, filled to capacity with opposition fans, challenging your team and identity.

For those of us separated by distance, creating a Sens place requires a little more creativity. Perhaps you live on another continent, and your Sens place requires PVRs and international mail. Maybe you live in another part of the country and your commitment to the team requires you to carve out a space for the Sens in the heart of Vancouver, Toronto, or Boston. Maybe your Sens place is Google Translate, and you scower the internet for any news about your team.

For many of us, our Sens place is not where we watch, but who we watch with. Maybe it doesn't feel like a Sens game without your best friends. Sometimes you just need to watch with your parents or kids, connecting across generations with a common love for the Sens. Maybe no game is complete until you've rehashed it the next morning with your coworkers, neighbour, or at recess. Maybe you don't know any other Sens fans and watching the game while commenting online allows you to connect with people who love the same things as you.

My Sens place is my living room. I live in London and in southwestern Ontario you're either a Leafs fan or a Wings fan. I rarely watch the game with anyone else and so I often decorate my living room to get into the spirit of the game. I hang up my jerseys and caps, and display pucks and patches. I collect cards and I remember what it was like to be a kid and love certain players. I display photos of Sens players past and present. I draw and paint, and come the stretch drive and playoff time, I take the paintings and drawings off my walls and place them in the living room. And I talk hockey with a pretty great online community. 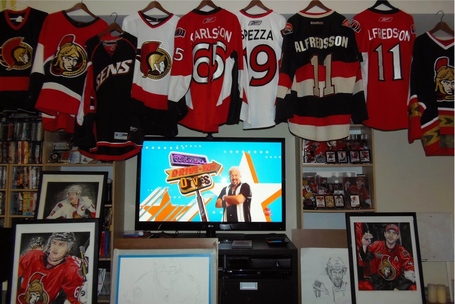 Where is your Sens place? How do you show your commitment to your team?