And this time, they had help.

Ottawa had a goal added by video review and Boston had a goal disallowed that video review showed probably should have counted. Boston lost their best faceoff man for more than half the game. Ottawa was facing a backup goalie.

And still, they wound up on the wrong side of a one-goal game.

There were a few similarities to the team's last loss, a 4-0 drubbing by Toronto: Boston's goals came primarily from uncovered players or outstanding deflections, and Ottawa had numerous scoring chances trickle just wide or bobble or otherwise just miss. Unfortunately, the team just doesn't have the firepower to overcome those mistakes, and certainly not against a team like Boston.

But there were positives, too, as the team didn't roll over in this one--they managed 47 shots on goal. They also allowed 50 of them, which means we're going to be talking about goalies in a bit. But first, here's the goals as I saw them:

Not even three minutes into the game, the third line is out for an early shift. Chris Neil fights to hold the puck along the boards until Z. Smith comes along to dig it out. Marc Methot moves up to keep the puck in and it bounces out in front where thinly-veiled Sens Hero Colin Greening pounces on it. He doesn't have time or room to do anything except shoot off his backhand, and he does, beating thinly-veiled Sens Killer Anton Khudobin through the five hole. 1-0 Senators. The rout is on.

No, I lied. This is the Ottawa Senators. So, not a minute later, they give up a great scoring chance. Sergei Gonchar is tied up with his man, so Chris Phillips comes over to help, leaving Tyler Seguin all alone. Lehner makes the save, but remember this look: 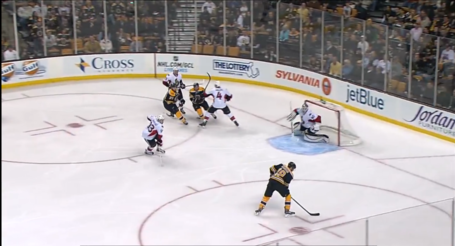 Anyway, there's a faceoff, Boston wins it, and David Krejci deflects a Zdeno Chara wrist shot (which is probably only going 100 miles per hour) past a helpless thinly-veiled Sens Hero Robin Lehner. 1-1, tie game. The rout is not on.

About a minute after that, Lehner makes a routine save on a dump in. The Bruins are completing a change, so he can't freeze the puck. Phillips is the only defenseman back, so Lehner plays it to him. It's important to note his partner Andre Benoit is nowhere to be found. He seems to be way up the ice on the left-hand side, presumably to support a breakout. But Phillips either doesn't see him or doesn't like that option, as he instead tries to move the puck along the right-hand boards. That doesn't work, as it winds up right on Brad Marchand's stick. Marchand gets around Phillips and Seguin goes wide to the open ice. Benoit rushes back to try to break up the pass, and this is the result: 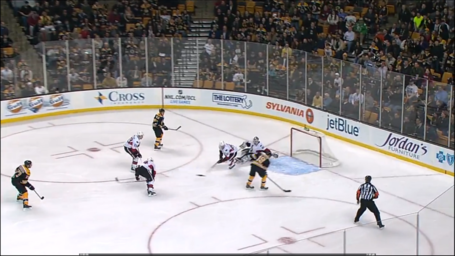 Deja vu right there, huh? Good luck saving that one, Robin. 2-1 Bruins. The rout is on.

Nothing happened in the second period. They didn't even play it. They just skipped to the third period, and so shall I.

Early in the third period, the line of Mika Zibanejad, Jakob Silfverberg, and Guillaume Latendresse put together some great pressure. Latendresse feeds Zibanejad, who in turn feeds Silfverberg. Ooh Ah should have scored, but bobbles the puck and can't get a clean shot. He retrieves the puck from behind the net and centers it through four Bruins players, including Khudobin, to find Benoit. Benoit shoots and scores a goal, but it's in and out off the camera so quickly that no one notices. Should have checked with Alfie. Anyway, they review the play at the next stoppage and Andre Benoit has his 4th 3rd goal of the season. Never forget. 2-2, tie game.

From there it looked like things were headed to overtime, but just after the ten minute mark, this happened: 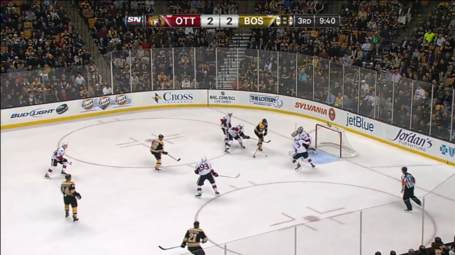 Yeah, that's Nathan Horton behind three guys to pounce on a Lehner rebound. That winds up as your game winner, 3-2 Bruins.

The Senators would sustain pressure the rest of the game, including a 6-on-4 with 30 seconds left, but could not beat Khudobin. The Senators will have one last chance to one last chance to get a win against Boston this season, and better pray to the god of skinny punks they don't meet this team in the playoffs without Jason Spezza and Erik Karlsson back.

Here's our own Ryan Classic with some numbers:

Robin Lehner against Boston in 2013

Tonight Lehner saved 47 of 50 shots, good for a save percentage of .940. So, once again, he probably deserved a better fate.

Not just because he scored a goal, but because he was the best player on Ottawa's best line. Greening also led the team with six shots on goal and tied for the team lead in hits with three. He had a ton of scoring chances as well. Greening shines when he's in a third line role.

45 saves on 47 shots. And this guy is Boston's backup. Friggin' Boston.

In addition to scoring a goal on the night, Seguin took 12 shots. The next highest for the Bruins was Rich Peverley, with 6. 12 shots is the kind of number you see from a guy like Karlsson, so that should tell you what kind of night Seguin had.

Z. Smith had the primary assist on Greening's goal and four shots of his own. Neil had 8 hits on the night. This line showed up to play tonight, and seemed to thrive on the physicality.

O`Brien took two hooking calls, won just two of his five faceoffs, and played just 5:18, the fewest of any Senators player. Look for Peter Regin to play in his place next game.

Final note, this recap was merely 987 words long, which is too short for a Paricap. This note takes me over 1,000 words, which is more acceptable.