A long time ago in a galaxy far, far away...the Senators and Hurricanes played a hockey game at SBP.

We have spent large amounts of time around these parts discussing what Ottawa's best hope for playoff success - Erik Karlsson - has been wearing while skating. But there is another: Jared Cowen. Cowen hasn't played hockey in so long that he has been forgotten by many, allowed to quietly rehab his injured hip out of the glare reserved for stars like Karlsson and Jason Spezza. Early in the season Cowen was injured in Bingo, the AHL city farthest away from the bright center of the hockey universe. He was told his season was over, but Cowen altered the deal.

The first period started brightly for the Senators, with successive breakaways for Kyle Turris and Cory Conacher. Conacher in particular hopped on his T-16, but failed to bulls-eye the womp rat. Midway through the period, Milan Michalek, in only his second game back, went on a clumsy break; odds not in his favour, he was unable to successfully navigate the Hurricanes' lone defender. Cowen landed a thundering check on Carolina forward Jeff Skinner, hung-out by a suicide pass from teammate Chad LaRose; however, the league might take a second look at the hit. LaRose immediately challenged the big walking carpet to a tilt. LaRose, a little short for a stormtrooper, clearly forgot that wookiees have been known to tear arms from sockets and both he and Skinner headed to the dressing room. Skinner would not return. LaRose's instigator penalty gave Ottawa a power play, but it resulted in nothing. Dispensing with the pleasantries, the tone of the game took a darker turn, as each side looked to new (physical) ways to motivate their respective teams.

The Dark Side seemed to take the lead on a Tuomo Ruutu goal, but their moment of triumph was delayed. The play went to review and it was determined that Ruutu used a distinct kicking motion, and the goal was disallowed. In the dying minutes of the period, Mika Zibanejad snapped a puck into the Carolina net. The kid was all clear in front, but Conacher was the brains, sweetheart: he took the puck below the red line and fired it out in front of the Carolina net.

The second period began with a Marc Methot penalty. Daniel Alfredsson and Milan Michalek generated two good chances while down a man, and the Sens successfully killed off the penalty. Five minutes into the period, Michalek showed he's good against the living, sniping Ottawa's second goal of the game. After some sloppy defensive zone play (particularly by Turris along the boards) the empire struck back with a goal by Justin Faulk. Immediately following the goal, Cowen got into a second fight that would lead to another power play for the Sens. A wanted man with the death sentence on 12 systems, Cowen answered Kevin Westgarth's challenge. On the power play, Latendresse and Neil broke away for a 2-on-1. It might have helped if speedsters like Conacher and Silfverberg got out and pushed, but a fabulous Latendresse pass ensured Neil of the tip-in and a two-goal difference was restored to universe. With less than five minutes remaining in the second period, Craig Anderson saved Ottawa's 2-goal lead, by using an old Jedi mind trick (or by stacking the pads) on a great chance for former Senator Joe Corvo. Emotions continued to run high, as SBP quickly turned into a wretched hive of scum and villainy. With 12 seconds left in the period, Chris Neil and Tim Gleason engaged in a spirited tilt. Informed the last remnants of the Old Republic had been swept away, Neil dispensed with his diplomatic mission to Alderaan and tried to send the message that all grievances would be answered by #25. The highlight of the second intermission was a new Sportsnet feature "#AskDenis", in which the Senators own 900-year-old sage answered twitter questions. I would like to see Denis in a Geritol commercial.

The third period began with the Senators mired in the desolate sands on Tatooine; stuck in their own end through a combination of sloppy defensive play and Carolina pressure meant the ice felt tilted at times. Cowen didn't let the Canes response to the Skinner hit alter his play, showing a lot of guts after what he pulled, and he laid a nice check on Ruutu midway through the period. Midway through the period the Sens were finally able to pressure the Canes in their own end, with a strong cycle from the Turris line. The Hurricanes pressured the Sens for most of the period but were unable to break through. With less than four minutes remaining, Bergeron challenged Michalek, tying the Senator up and slashing him. As clumsy as it was stupid, Bergeron was on the receiving end of an elbow, which resulted in a fight and extra minutes for Michalek. The Canes cut through Ottawa's defense quickly and Eric Staal put his team within one. Ultimately, it wasn't enough, and the Sens held on for a 3-2 victory.

It was a huge first game back for the sophomore defenseman and not just because he was compared to both Princess Leia and Chewie. He played almost 17 minutes tonight despite receiving two fighting majors. Cowen was intent on showing he was ready to be back; his strong physical play left little doubt that he's healthy. Cowen knocked Carolina off their game early and the Canes spent most of the night trying to even the physical score, rather than the actual score.

Chris Neil scored the eventual game-winning goal on a nice tip-in. He also wins the Chewbacca Award, as greatest sidekick and most loyal co-pilot, for illustrating to Tim Gleason that further issues with Cowen's hit on Skinner should flow through Neil.

Pretty standard night for Andy: peppered with shots all night, he gave his team a chance to win. He even delivered a highlight-reel save on Joe Corvo in the second period, one of his 32 saves on the night. Ho hum. 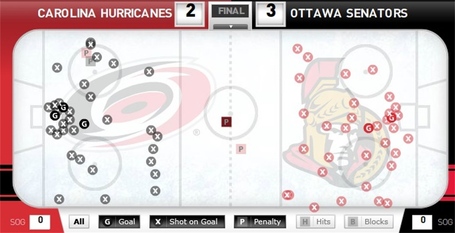