Pulling the goaltender in overtime

The last game of the NHL regular season could present some interesting decisions: such as pulling your goaltender in overtime.

Share All sharing options for: Pulling the goaltender in overtime

Imagine the following hypothetical scenario: the Senators are tied in points with the New Jersey Devils for the final playoff spot. The Senators and Devils have an equal number of non-shootout wins (the first tiebreaker in the NHL), but Ottawa owns the second tiebreaker in this imaginary scenario - the head-to-head record.

The Senators game started at 7:00 and they are currently tied 1-1 with a minute left to go in overtime. The Devils had the lights go out and have 10 minutes left in the third period in a 2-2 tie.

Ottawa's choices are summarised below (click the picture for a larger image): 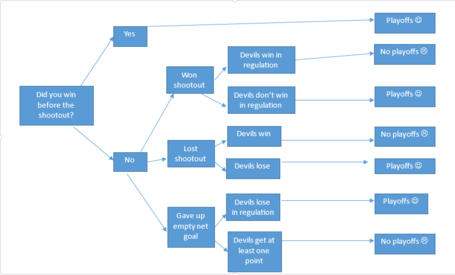 So what would you do Mr. MacLean? Would you pull your goaltender and try and guarantee a playoff spot. Keeping in mind that doing so could completely backfire and Ottawa could leave the game with zero points, allowing the Devils to sneak in just by taking the game to overtime. Of course there is no guarantee that any goal will be scored.

Personally, I would pull the goaltender. The Devils would have the advantage of finishing their game after Ottawa's result is known, and they would know exactly what they have to do. If they need to win before the shootout, their decision would be automatic.

I don't know if I would want this to happen with my team involved, but it would be incredibly dramatic to see such a scenario unfold at the end of this season. Such a decision must involve the coach's confidence in the power play unit, their ability to prevent a shorthanded goal and the strengths and tendencies of the teams in the other games. But you might have to decide this in 30 seconds.