Entering Friday night's game against the New York Rangers the narrative focused on injuries: Dave Dziurzynski was the latest name on the shelf for the Sens and Marc Staal is out indefinitely. However, Brad Richards would dress for the Rangers for the first time in two games. Once Robin Lehner was named as the starter the narrative quickly shifted to which goalie - Henrik Lundqvist or Robin - would Robin Lehner's dad still love at the end of the night?

It was a tale of two periods. The Sens got off to the hot start; the Rangers evened things up in the second half. The period began with no stoppages and offensive pressure from both teams. Bucking the season trend, Ottawa scored the first goal on a Zack Smith deflection - his second goal in as many games - off a Sergei Gonchar point shot, to put Ottawa ahead. Rangers bench boss John Tortorella immediately called a time-out and ripped into his players. After Eric Gryba drew a penalty in the defensive zone and with Marian Gaborik in the box, Patrick Wiercioch put the Sens up by two with a shot from the point. Unfortunately Rick Nash answered back with a knuckler of a puck, shot from a few feet inside the blueline. Robin Lehner probably wants that one back, but so too do Sergei Gonchar and Eric Gryba: their weak poke checks did nothing to stop Nash and didn't help Lehner out either. After New York's Michael Haley rocked JOB in the defensive end, Chris Phillips and Haley fought. The Sens were worse off after the tilt. The Rangers received a powerplay and the Sens lost Phillips for the rest of the first and most of the second period (19 PIMs total on the play). Before the period was out, New York tied it up with a Brad Richards shot; another goal that Lehner probably wants back.

The pace of the second period picked up midway through the frame with a flurry of chances for the Rangers. Luckily for the Senators a fortuitous post prevented the Rangers from taking the lead. That's not to say Lehner wasn't strong in the face of increased New York pressure - he was. Lehner's highlight? Calmly batting the puck out of mid-air in the midst of a Rangers attack. Kyle Turris managed a few good chances, but couldn't convert. Near the end of the period Turris broke out at the end of a shift, maintaining control despite attempts to bring him down, leading to an Ottawa powerplay. Unfortunately, 20 seconds into the PP, Silfverberg took a penalty, and the two teams finished the period four-on-four.

The third period started with the teams exchanging scoring chances. Robin Lehner continued to keep the Sens in the game with a highlight-reel stop on Derek Stepan who fired at the Ottawa goaltender from point blank range. Midway through the period the Sens increased the pressure in the Rangers end, with a few consecutive shifts in the offensive zone and carried the play for the rest of the game. Emotions picked up as well, as Zack Smith and Chris Neil tried to get under Ryan Callahan's skin. Eric Gryba nearly gave the Sens the lead, but instead wired his shot off the crossbar on a play Henrik Lundqvist was beaten on. Ottawa maintained the pressure and were rewarded when Jakob Silfverberg calmly put a rebound past Henrik Lundqvist. Unable to get an empty-net goal, the game finished 3-2 in favour of the Senators. Shots 39-35 also in favour of the Senators.

No, he didn't score. But he did drive the Sens offense for the majority of the game, had several good chances, and drew penalties. He also made a couple of nice defensive plays in his own end. Not bad for someone who's basically been a "no-show" for most of the year according to Darren Dreger.

Yes, he didn't look his best on the Rangers' two goals (not that he got much help from his defenders on either play) but when the Senators needed him to keep them in the game in the second and third period, Lehner was up to the task. Dad Michael would be impressed.

Scored the game-winning goal and it was a beauty. Best part? How calmly he took the rebound and slotted it top-shelf on a world class goaltender.

Methot had a beast of a game. While he was on the ice for the Richards goal it wasn't his fault. Methot made simple plays in the defensive zone tonight and managed to get off four shots against Henrik Lundqvist as well. But the reason he's a hero? He stepped up big when Phillips missed the end of the first period and nearly all of the second. He played more than 27 minutes tonight, more than any other player.

Gryba gets a mention for one reason: his offensive awareness in the third period. Not only did he almost put the Sens ahead with a shot that went off the crossbar, he directed a shot on net that Jakob Silfverberg calmly buried for Ottawa's third goal.

Late in the third Ottawa rookie Jakob Silfverberg was angled towards his fellow countrymen Henrik Lundqvist. Stopping on a dime, Silfverberg showered the Olympic gold medalist with snow and then was all smiles in the ensuing scrum.

A few minutes later Jakob was all smiles again after he potted the go-ahead and eventual game-winner past Lundqvist. 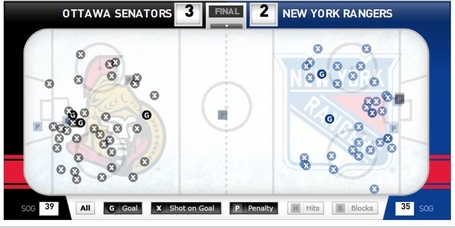