On Thursday, the NHLPA consented to the proposed realignment plan for NHL teams, so it's moving on to the final stage of the process: A Board of Governors vote. If (when?) that goes through, it'll be official.

Next year, the NHL standings are going to look a lot different.

Assuming, of course, the proposed NHL realignment plan passes when it's put to the NHL's Board of Governors. It's expected that there won't be much of a problem having it approved.

This realignment, as you've probably already seen elsewhere, will change the current six-division structure of the league to a four-division make-up, with four teams from each division making the post-season. And because the current number of teams in the league isn't divisible by four, the two Eastern Conference divisions will each carry eight teams while the Western Conference divisions carry seven. Here's a map of the new structure, courtesy Cassie McLellan of Raw Charge: 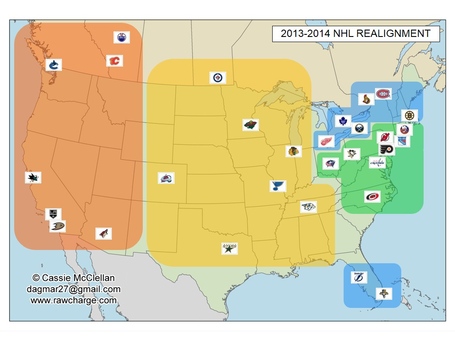 As you can see, the Ottawa Senators retain their current divisional rivals (the Toronto Maple Leafs, Montreal Canadiens, Buffalo Sabres, and Boston Bruins) while adding the Detroit Red Wings, who will finally move to the Eastern Conference, and the league's two Florida teams, the Florida Panthers and Tampa Bay Lightning.

This new-born Northeast-ish Division, oddly called the Central Division despite not being central at all, might be the worst-structured of the four: The Florida teams make for an increased travel schedule compared to the Atlantic Division, and there are more teams than there are in either Western Conference division (thereby reducing the chances for an Eastern Conference team earning a playoff berth). So it's the worst of both worlds.

From a business perspective, though, the Northeast Division is among the strongest. The Sens still get their rivalry matchups against the Habs and Leafs and they add some against the Red Wings (who've got a good number of fans in the area).

And of course, this is a temporary disparity; moving to a four-division structure seems like it's certainly an indicator that the NHL will welcome two expansion franchises into the league in the near future. Although it's unclear where those teams will be located, we'll almost certainly see another realignment when they come around.

What do you think of the new NHL alignment?