Ottawa outplayed Toronto on Wednesday night, but came away with no points due to shaky goaltending.

That was a pretty fantastic performance by the Ottawa Senators. They spent large stretches of the game in the Toronto zone, scored four goals, had 43 shots on net and a whopping 97 (!!!) attempted shots. That would be enough to win most nights in the NHL, especially for the 2013 Senators. Unfortunately for once, they did not get a strong performance in net and the Toronto Maple Leafs would just about hang on for a 5-4 win.

The game had an unusual start with David Dziurzynski getting into a fight with Frazer McLaren just 26 seconds into the game. Dziurzynski would be knocked out cold and had to be helped off the ice. To see fans, including young children, cheering loudly as a player is in the process of being knocked out struggle to get on his feet, it was quite awkward. This isn't something unique to Toronto fans, it is hockey fans in general, and it is quite sad really.

Back to the game, Ottawa did have a couple of strong shifts early on, but it would be the Leafs that would open the scoring on a weak Tyler Bozak shot that would deflect into the net off Peter Regin. Toronto would make it 2-0 on Jay McClement's slap shot from the slot that cleanly beat Ben Bishop. The Senators would have their chances and Kyle Turris should have scored a shorthanded goal while alone with James Reimer late in the first period. However, as has been the case for the past 20 games, Turris could not score.

Things would get worse early in the second and the Senators would find themselves down three goals for only the second time all season. James van Riemsdyk's 13th goal of the season was a result of some nice work by Phil Kessel, whose rebound was poked home. Just over a minute later, after an extended delayed penalty, Mika Zibanejad would get Ottawa on the board, putting home the rebound from Sergei Gonchar's point shot. Ottawa would dominate the second period, and one particular sequence stands out: Silfverberg-Regin-Alfredsson would have the Leafs pinned in their zone for over a minute, cycling the puck. It was beautiful to watch. Ottawa found themselves down 3-1 after two periods, but were probably the better team at that point.

Early in the third, Zack Smith would finally score his first goal of the season to bring the Senators within a goal. That joy would be short lived. Kessel would restore the two-goal lead just two minutes later, and midway through the third, Nazem Kadri would put Toronto ahead by three goals for the second time. The Senators would not go down quietly, fighting right to the end. First, Daniel Alfredsson made it a 5-3 game on a beautiful shot from Reimer's right. Then with the extra attacker on, Andre Benoit's shot would go wide but Erik Condra's pass from behind the net connected with Colin Greening making it a 5-4 game. There would be two or three chances for Ottawa to tie the game, however, Reimer would stand tall the rest of the way.

All in all, no complaints about that game. I was lucky enough to sit behind the Leafs net (for the 1st and 3rd periods) and it was a thoroughly entertaining game. The Senators would have won that game with average goaltending and they are going to be okay with that kind of performance until Jason Spezza returns.

Sens Hero: Zack Smith
Not only did Smith scored his first goal of the season, he had five shots on net and another five missing the net for a total of 10 attempted shots. He was very noticeable (in the first and third period anyway) and I always found myself thinking: Hey there is Zack Smith behind the net again.

Honourable mention: Colin Greening
Greening's late goal made it a frantic finish, and he was very involved all night. He too had five shots on net and was buzzing near the net. Plus, he frequently was chirping the Leafs players which was great.

Honourable mention: Chris Phillips
The Senators defence was pretty good as a whole, not allowing too many chances to the Leafs. Phillips managed 11 attempted shots, led all Sens with over 23 minutes of ice time and had six hits for all you good Canadian kids out there.

Sens Zero: Ben Bishop
Bishop allowed five goals on 28 shots and while not all of the goals were terrible, he has to make saves on good shots. He can't be absolved of goals on good shots, because it is his job to make saves. The average NHL goaltender would have let in probably two or three goals on those chances. It was too bad though. The Senators have had so much trouble scoring goals, and the one night that they finally score four they received subpar goaltending. I have no doubt that Bishop and Robin Lehner will continue to provide the Senators strong goaltending, so hopefully the offence can keep it going.

Eric Gryba sucks watch
He was actually not that bad tonight. It could be that the Senators were defending the zone furthest from me for 2/3rds of the game, but I didn't really have any !@#$ing Gryba moments that I was expecting to have.

And just for fun, some pictures from tonight's game. I would be the guy behind the Leafs net in a red jersey you might have seen jumping up on 3-2, 5-3 or 5-4 goals.

Here are the warm-ups. I am not going to lie, every time the Leafs missed the net and hit the glass, I was flinching. 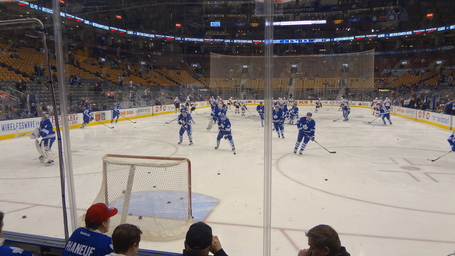 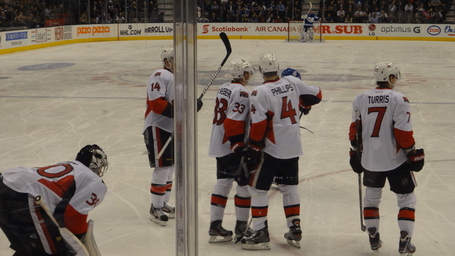 And here is Phillips celebrating! 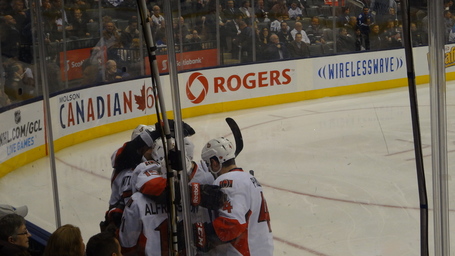 And there he goes celebrating again...this can be a Phillips scrapbook. 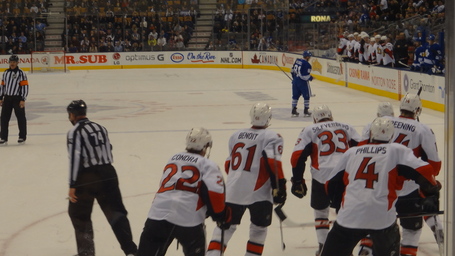