Scoring goals is easier when you hit the net.

No need for a forensic doctor in this one. The Senators could not get any chance to bounce their way, while the Maple Leafs mercilessly buried theirs. Give Toronto full credit, because they played the game they wanted to play, and Ottawa had no answer for it.

Things started off badly for the Senators when Daniel Alfredsson was called for hooking just two minutes and three seconds into the game. Joffrey Lupul was left alone (a common theme on the night) at the side of the net and caught goalie Ben Bishop by surprise by choosing to go for the tip rather than pass or shoot. It was a tough angle, but of the goals scored on the night, it was the only Bishop really had a chance on. This was a play that showed how Bishop, despite 26 years old, can still be handicapped by limited experience at the NHL level. A more seasoned goalie might have made a better read on the play.

Regardless, Bishop recovered well from that point on, and though he only made 19 saves on 23 shots, he was helpless the rest of the night--hung out to dry by his defensemen, especially thinly-veiled Sens Zero Chris Phillips--and was reduced to watching pucks go into the empty parts of the net. On the other end, Leafs goalie James Reimer, who looked shaky enough that it was commented on by even the CBC announcers, got tons of help from his guys in clearing the crease.

After that, the Sens, led by Matt Kassian, wasted time fighting instead of trying to play hockey. Kassian had an obligatory fight with Colton Orr, which was completely pointless, and then before the period had ended, fought Frazer McLaren--presumably to avenge Dave Dziurzynski. It didn't work, though, because Kassian lost that fight and Dziurzynski is still playing in Binghamton. Sandwiched between those bouts was a grab-fest between Colin Greening and Mark Fraser. Fraser went after Greening, who obliged, realized he was in over his head, and went for the takedown. Greening succeeded despite getting jerseyed. He also landed no punches.

In between fights, the Senators spent time in the box for other infractions, like tripping by Eric Gryba and interference by Phillips. Needless to say, momentum was hard to find in the period, and the Senators were lucky to have the score remain 1-0.

As they stopped cheating and started playing hockey, however, the tide began to turn, and the team began to generate good scoring chances. They'd carry that play into the second period, but could not find the net. At 12:45 of the period, with a sixth attacker thanks to a delayed tripping call on Chris Neil, Lupul deflected a John-Michael Liles shot to a wide-open Nazem Kadri, who had simply skated in behind Phillips. Kadri was behind Bishop, too. It was just him and the whole net.

Things unraveled from there. Early in the third period, after a Senators power play had expired, Jakob Silfverberg won a battle for the puck in the corner of his own zone. He tried to fire a pass to Sergei Gonchar to start the breakout, but Lupul read it, pounced on it, and charged in undefended on Bishop.

Now, we've seen Bishop face a shooter one-on-one before, and that's no big deal. The problem, in this case, was that Kadri was able to turn around and charge the net the second he saw the pass get intercepted. 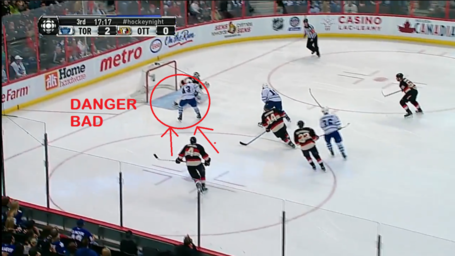 Phillips was slower to read the play, and also is a slower skater than Kadri, so that wasn't going to end well. Bishop did his best to play the shooter, but Lupul simply had to pass to Kadri and let him tap it into the open net.

What did head coach Paul MacLean think about that?

MacLean refused to criticize Silfverberg in public: "Jakob has been such a good player for us, I think we'll play him the next game."

That's pretty fair. What did Ooh Ah himself think of it?

Silfverberg on his turnover that led to 2-on-0: "It wasn't one of my greatest plays, but at least I learned something from it."

It's worth noting, I think, that this is the exact same play Gryba is often criticized for. This just in: Rookies make mistakes. Case closed.

The last goal, if you really want to know, was the result of Kadri taking a great shot. Lupul won a battle keep the puck in, passed to Kadri, who passed to Lupul, and went to the open area of the ice. Lupul would pass back to Kadri, who ripped a shot to where Bishop was, rather than where he would be. Bishop was pushing off from squaring himself to Lupul to cover the open far post, and nothing about his body language said he was shooting stick side. 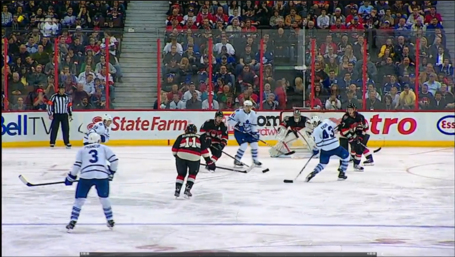 If Bishop wasn't able to stop this shot with his the size of his frame, I don't know what goalie could have. Just a great cross-body shot.

The final minute of the game saw 26 PIMs handed out to Neil, Kassian, Orr, and McLaren for various goonery. In the end, that was a pretty telling summary of the game--for all the physicality it involved, the Leafs were able to still play hockey, and the Senators were not.

Despite the recap above and the final score, the Senators weren't quite blown out of their own building. They had five power play chances of their own, converting none of them. They also had numerous tips just miss the net, which is a new and creative way for missing the net from the team best at missing the net this year. Colin Greening also had a goal, but it didn't count because the whistle had blown. The puck was uncovered, but the officials had lost sight of it. That's just bad luck. But bad luck is usually a byproduct of poor execution, and the Sens had that in spades for this one.

Not Phil Kessel for a change, but these two both had four-point nights. They essentially did whatever they wanted.

I'm not a huge believer in plus/minus as a useful stat, but Phillips' minus-3 accurately reflects his night, as Kadri was Phillips' man on all three goals. I'm no coach, but I'd suggest that covering a team's leading scorer is better than not covering him.

Statistically, he was a zero, but I still thought he was the team's best player. The first period could have easily been worse than 1-0 without Bishop--the Senators were outshot 11-5--and he made more than a few top-notch saves, including a dandy with the knob of his stick. Robin Lehner is going to get the next start unless Anderson is ready to play, but Bishop gave his teammates a chance to win this game, and they did not seize it.

Edit: Oh man, I'm so annoyed by this game that I forgot the shot chart and highlights. Here they are for you masochists.