So, I was thinking today about how to waste a few hours of my life the shot charts we see in our recaps for every game, as well as some previous talk of PDO and how if your shooting percentage is higher than your save percentage you are likely to revert to the mean. I started thinking how this seems kind of inadequate. I do understand the idea of shooting percentages eventually reverting to the mean, but I also don't think all shots are created equal. Surely a shot from the boards around the top of the circle isn't as likely to go in as a shot from 6 feet from the net, right?

Anyone paying attention to my posts on the recaps the last few games (note: if you haven't, you're probably not missing anything, but you are making me sad) will notice that after every game I seem to lament lately how few of our shots seem to come from between the circles. So in an attempt to show that not all shots are created equal, I went to ESPN to find the shot chart for all of our games, and started making myself a massive spreadsheet of the data.

Some notes on the data:

I divided the ice up into the following 6 zones: 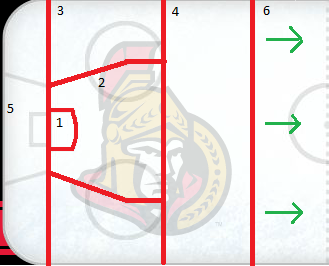 5. GCSFH (Gretzky Could Score From Here)

So here's the data over the course of the first 22 games minus one.

There's that PDO gap we're talking about. Over the long run, believers in PDO says that those shooting percentage numbers will come to be about even. Let's dig a little deeper into the numbers. Let's look at area 1: The Crease

Unsurprisingly to me, these shooting percentage numbers were the highest of any area I selected. They hovered pretty consistently around 20% as I was entering the data. I anticipated that the next highest percentage area would be the slot. Here's what the numbers had to say:

These numbers look closer to what we would consider as normal shooting percentage for a game, though as expected this was the second best area. You will notice that in both categories so far, our opposition has actually had a HIGHER shooting percentage than we have, in spite of all of our talk about the amazing save percentages of our goalies. How have our goalies kept their numbers so good? Lets take a look at the peripheral area:

So here's one of the keys. We've scored very little from here, but we have managed to take advantage. Our goalies have completely shut the door on an area that they're getting 6 shots a game from. That's a nice little boost to the save percentage. I would tend to interpret this as our goalies making the saves that they are supposed to make. There aren't a lot of goals scored from these areas that a goalie didn't have a reasonable chance of stopping. Will we sooner or later see a goal or two come in from here? Almost certainly. But it's interesting to me that Anderson/Bishop/Lehner have done so well not by stopping more of the difficult shots, in the slot/crease, but by firmly shutting the door on shots that have no business going in in the first place from areas like this. Let's move on to the Point:

Again, not many shots go in from this area. A good point shot is usually looking for a rebound, or a tip. However, again, you see that our goaltenders are making these easier saves at a better rate than their counterpart on our opposition. Again I find myself beginning to believe that our goaltending strength has been around not letting in the weak ones, more than anything.

Here's how our shots split up, in graph form. Obviously, from this data, (and there's nothing surprising here!) the higher a quantity of our shots come from the crease and the slot, the better. 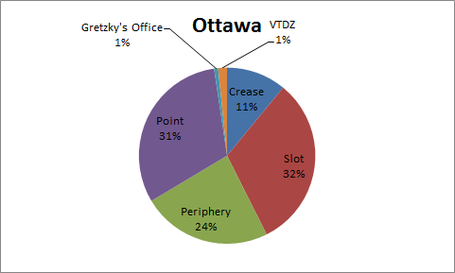 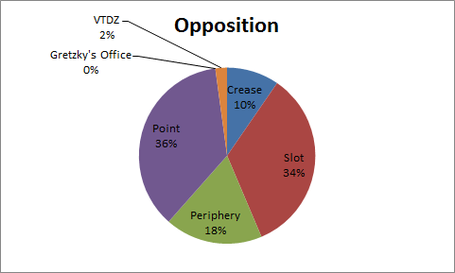 Now, SMALL SAMPLE SIZE ALERT, trying my hand at the "Jason Spezza is good at hockey" hypothesis, I took a look at how Ottawa's shots broke down in his five games. Unsurprisingly to me, Ottawa's shots from the slot took a jump: 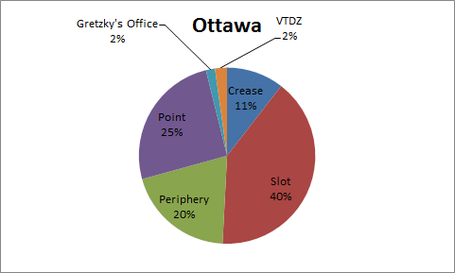 I tried the same thing out with Karlsson in the lineup, but the graph looked almost identical to the full season version, which made me think perhaps his impact is more in the numbers. This chart should, of course, be nothing surprising: 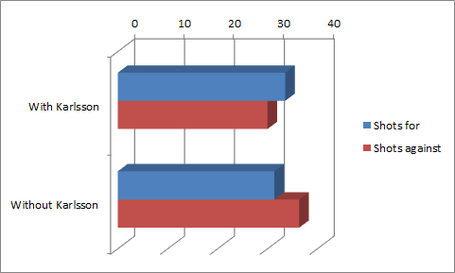 So, I'm pretty sure that there's nothing surprising about any of this to any of you. Shots from slot = good. Shots from your own end = bad. Jason Spezza helps us get shots in the slot. Erik Karlsson's absence means 3.5 less shots for and 5 more shots against per game. Woo, insight! Let's be honest, here, I just wanted to stay up half the night making a few charts.

It occurred to me immediately after I hit publish that my pie chart for with and without Karlsson had been put together incorrectly on my end, and when I said it made little difference, I was wrong: 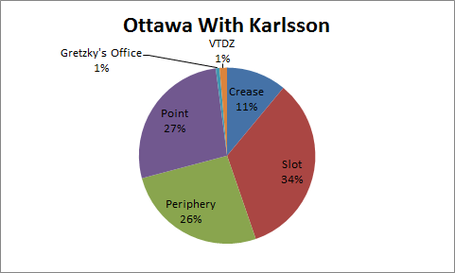 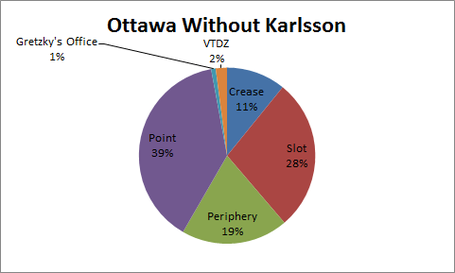 Clearly a 6% jump in Slot shots IS in fact a useful thing to have, not that "almost identical" thing I talked about earlier.

And NOW I'm going to get some sleep.