Silver Nuggets: Some Love for Mac

Last year, the Senators were a team carried by their stars, lucky to have so few man games lost to key players. A common refrain was "they are a (Spezza, Karlsson) injury away from being a bad team". Looks like that isn't the case.

Share All sharing options for: Silver Nuggets: Some Love for Mac

Thanks for playing along yesterday folks, we had roughly 220 votes at the time of writing this, and even though there were three options, 51% of you had Jakob Silfverberg leading the team in goals at the end of the season for a variety of reasons, but mostly because he's the hottest of the three. Mikeec67 put it very simply, and wrote what I think many of you were thinking when you voted for Jakob:

The release, the confidence he’s shown in the last few games, the skill. It will be close, but Silfver all the way.

I was also floored by the effort put in by B_T to put together this graph explaining his reason for choosing Silfver: 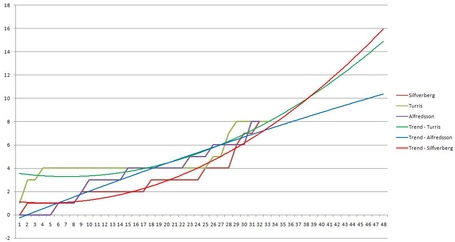 And of course we got (as I knew we would) one from "Roger" that looked like this (8 recs):

How can you argue that, right?

For today, going to keep it short, just wanted to give some love to the guys on this team that are healthy, but most specifically Paul MacLean and his staff.

How many times last year did we hear that the Senators were just an injury to a key player away from being a non-playoff team? That the success our club had last year was simply the result of

Now that the Senators have played 28 games this season without Jason Spezza. 19 of those have also been without Erik Karlsson, the best defenceman in the world. Milan Michalek? Only suited up 15 games himself.

For a while, it was the world class play of Craig Anderson that was to be pointed to as the reason the Sens were afloat. Of course he has been out for 18 games now.

Because this season has shown, we were FAR from one injury away from success.