Senators Steal From the Devils, Win 3-2 SO

Share All sharing options for: Senators Steal From the Devils, Win 3-2 SO

Before tonight's game the chatter focused on the absence of Ilya Kovalchuk. Overshadowed by Carolina re-signing Alex Semin Monday afternoon, the fact that Ottawa would face New Jersey without the Devils' most dynamic offensive threat was a boost for the Sens. The Senators started the game strong, pressuring the Devils and keeping the puck in the New Jersey zone for the first few minutes. After a close call by Guillaume Latendresse, Chris Phillips put the Sens in the lead with a shot Martin Brodeur should have stopped. Midway through the period the Sens got another, glorious opportunity when Jakob Silfverberg fed Kyle Turris with an excellent pass and Turris broke into the Devils zone all alone. Despite having Brodeur beat, he rang the puck off the post and put the rebound off the same post as well. The Sens continued to pressure the Devils; even on the man-advantage New Jersey couldn't get much going as Erik Condra expertly killed another powerplay. The Sens hit their third post of the period when Latendresse blasted a one-timer from the slot only to be stopped by Brodeur's best friend.

The second period started with a tilt between David Clarkson and Zack Smith. The post play continued in the second, but this time it was the Devils with the bad luck as Andrei Loktionov hit the crossbar. While the Senators controlled play in the first period, the Devils fought back in the second and kept the Sens hemmed-in their own end. Jakob Silfverberg did get a breakaway, but lost control of a rolling puck and wasn't able to get a quality shot on net. With five minutes to play in the second, New Jersey evened the score when Loktionov slotted a rebound behind a diving Ben Bishop. The goal was coming all period as Ottawa spent most of the second in their end, outshot 20-10 through two periods. With only 16.8 seconds to go in the period, Colin Greening put the Sens back on top by pouncing on a rebound. Erik Condra carried the puck through the neutral zone, passing to Kyle Turris, who put a shot on net that Greening happily put behind Martin Brodeur. The goal rescued the period for the Sens and hopefully changed the narrative going into the intermission.

But it was the same story in the third. The Devils continued their control of the game as the third period began. While Latendresse had a good chance to extend Ottawa's lead, the Devils were able to tie the game at two. Marek Zidlicky slide away from David Dziurzynski and fired the puck past Ben Bishop and the crowd in front of the net. A scary moment near the end of the period: Erik Condra took a shot directly in the face and went down immediately before being quickly ushered into the dressing room. The Devils maintained the pressure for most of the period and the game headed to overtime and frankly, Ottawa was lucky to push it to OT: the Devils controlled the play for the last two periods and the Sens didn't deserve the guaranteed point.

Overtime saw end-to-end action and both teams exchanged multiple chances. Unfortunately, overtime solved nothing and a shootout was needed to decide the winner. Despite his continued struggles in the shootout, Paul MacLean sent his captain out there again and this time Alfie delivered, scoring his first shootout goal of the season. Mika Zibanejad scored the deciding goal on a beauty move to put one past Brodeur and shootout beast Ben Bishop continued to block out the sun. The Senators were badly outshot, 34-14.

Though he was the number one goalie for tonight's game, Bishop is forever third in the hearts of Sens fans. While it's fun to rag on Bishop when he lets in a goal or two, Ottawa was dramatically outshot tonight and Bishop held the team in the game. Want to place blame for New Jersey's two goals? Blame Ottawa's anemic offensive pressure. From the late stages of the first period, this game was played in Ottawa's end almost exclusively. Bishop's shootout dominance (he has now saved 16 of 19 attempts) secured a win Ottawa surely did not deserve.

He scored the shootout goal that put Ottawa ahead and is becoming more and more comfortable at the NHL level, especially in terms of physical play and offensive production.

A night to forget for the trio. They generated nothing all game; instead they were hammered all game long, stuck in their own end, giving up chance after chance. I wouldn't be shocked if Dziurzynski isn't in the line-up next game.

In the dying minutes of the third, Condra took a shot to the face at point blank range. He seemed to lose some teeth on the play. Seeing Condra skate off the ice makes you realize his importance. Condra is an amazing penalty killer and without him, Ottawa's special teams would be in trouble. 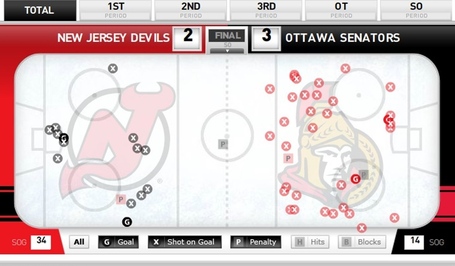