Despite a strong effort for most of the game, two late-period goals set the Ottawa Senators back and they fell to the Boston Bruins by a 2-1 score on Thursday night.

After a couple of games where the Ottawa Senators were fortunate to win, it only makes sense that they'd lose one in which they deserved a better fate, and that's exactly what happened with their 2-1 loss to the Boston Bruins on Thursday. The Sens now sit five points back of Boston in the standings, and the division lead is now virtually out of reach for Ottawa.

The first period was a good one for the Senators, but despite having the lion's share of possession time and scoring chances, they couldn't beat Anton Khudobin and the period ended with no score.

Ottawa's strong play continued in the second, and they once again had a lot of chances, but this time they were rewarded: Kaspars Daugavins caught Khudobin slightly out of position with a perfect shot to the far-side top corner--on the goal, Sergei Gonchar extended his assist streak to nine games, a new franchise record for defenceman. Late in the period, though, the Bruins found some when Daniel Paille's shot handcuffed Robin Lehner and tied the game.

Frustration seemed to mount for the Senators in the third period--whether due to their inability to score or their inability to get a powerplay, I'm not sure--and the team strayed from their game plan of getting pucks deep in the Bruins zone and pressuring them hard. They weren't dominated by the Bruins by any means, but after controlling much of the play for the first two frames, it was a marked difference--especially with just over a minute left, when Dennis Seidenberg fired a seeing-eye shot that navigated through a perfectly-executed screen (by Senators defenders) and past Lehner to give Boston the 2-1 lead they'd finish the game with.

Sens Hero: Kaspars Daugavins
Daug had his best game of the year, without a doubt, and that's not just because he scored his first of the season--it's probably why he scored, though. It's also why he played over 16 minutes, his second-highest total of the season. He actually had a couple other great scoring chances aside from the goal, and his four shots on net were second only to Jakob Silfverberg among Sens skaters. He also did a good job getting under the skin of the Bruins, and even though he was called for a penalty, it's a good dimension to his game. Also, Daugavins is a great interview...

Sens Killer: Referees
So many mysterious penalty calls and non-calls in this game, and they've got me scratching my head afterwards. For instance, why when Shawn Thornton threw off his gloves during a tussle with Guillaume Latendresse, both got coincidental minors; or why, when all was said and done from a line brawl in front of the Ottawa net, was Daugavins the only player to head to the box? I find it hard to believe the Bruins committed zero infractions in the game (aside from the coincidental to Thornton), but apparently that's what the refs saw.

Honourable Mention: Guillaume Latendresse
Much like Daugavins, Latendresse likely played his best game of the year in this one--certainly one of his strongest. He demonstrated some deceptively good speed, and had a nice dangle late in the third, as well. In a game against a big, physical team like the Bruins, a big, physical player like Latendresse can really demonstrate his value, and he did that on Thursday. He also stepped up in the dressing room after the game, and his comments (while clichéd) were the sort of things you like to hear from someone who's obviously a good veteran leader: 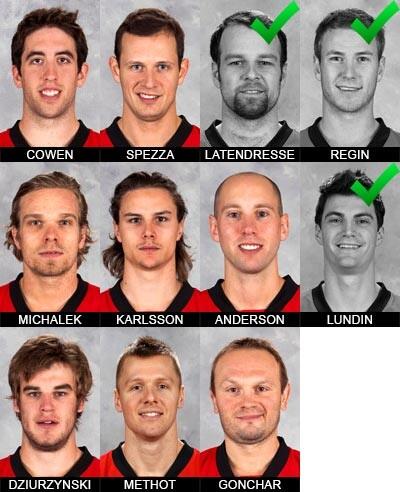 On the bright side, head coach Paul MacLean didn't sound too worried about the injury, but it is concerning that the team's biggest contributor left the game mid-way through the third period with an injury. But, as Wayne Scanlan tweeted, "What's a Sens game without an injury?"