The Jackals have continued their strong play as the playoffs inch closer. 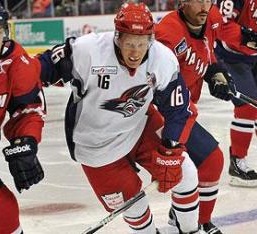 Jordan Pietrus: "Petey," as the guys on the team call him, was supposed to be an energy guy that lead by example when this season began. Despite wearing the "A," he has never really been considered a scorer, but those perceptions are beginning to change - very quickly. Pietrus was a monster for Elmira over the last week, particularly in the two victories over Trenton, where he put up five goals and two assists in the two wins, including his first career ECHL hat trick on Wednesday night. Pietrus has shown and proven that he can do a little bit of everything for Elmira. He's seen a lot of time on Coach Dwight Mullins' penalty kill, as well as a regular spot as a center of one of Elmira's two power-play units. He's not overpowering - coming in at 5'10'' and 180 pounds - but he will outwork his opponent on every play and definitely falls under the category of a player that you hate to play against, but would love to have on your side. With recent call-ups sending noted scoring threats Dustin Gazley and Jack Downing to Binghamton, Pietrus was asked to take on a bigger offensive role, and he's answered the bell in a huge way for Elmira thus far. He's on an ECHL contract, and no NHL team has his rights.

Rob Bellamy: I was at the Elmira-Trenton game on Wednesday night, and in the Jackals' 7-1 win there was no more dominant player on the ice than Bellamy. The University of Maine product kind of falls into the same position as Pietrus, in that he hasn't ever been known for his goal-scoring in Elmira, and has made his name more-so as a hard-working, team-first kind of guy. Last night was just the latest big step Bellamy has taken this season in becoming a more complete player. Bellamy was a plus-five, and fell one point shy of tying the franchise record of six points in a single contest, as he registered two goals and three assists against the Titans. However, there's so much more that Bellamy brings that isn't reflected on the scoresheet. He is fast as hell, and so often is able to draw defenseman to him as he flies down the wing entering the attacking zone, which of course opens up the middle of the ice and allows him to find a wide open teammate in the slot for a good scoring opportunity. It seems elementary to prepare for such a situation in a hockey game with professionals, but when Bellamy really gets his wheels going, I strongly believe it catches many of these defensemen by surprise, and results in huge gaps being left open as the Jackals enter the offensive end. Bellamy is linemates with Pietrus and Kevin Harvey, and the threesome has established itself as the Jackals best all-around line. Although Bellamy was drafted by the Philadelphia Flyers in the third round of the 2004 Entry Draft, he's currently on an ECHL contract and an unrestricted free agent at the NHL level.

March 22: Jackals vs. Fort Wayne - The first of a good, old-fashioned back-to-back between the Jackals and Komets will take place on Friday night at First Arena in downtown Elmira. The Komets are the ECHL affiliate of the Anaheim Ducks, but unlike their NHL higher-ups, Fort Wayne is most likely going to miss out on the playoff party this season. With that being said, they aren't mathematically eliminated, but a loss in this game all but guarantees them an early trip to the golf course this Spring.

March 23: Jackals vs. Fort Wayne - The Saturday night game against Fort Wayne is an intriguing one. Of course, Elmira is getting closer by the day to locking up the fourth seed and home ice advantage in the first round of the playoffs, but it's always difficult to play back-to-backs against the same team. This particular game becomes even more interesting if Fort Wayne wins on Friday and the Toledo Walleye lose at Kalamazoo. If that does happen, Fort Wayne would move within eight points of the final playoff spot with four games to play. Again, unlikely they get in, but if the Komets are playing a meaningful game come Saturday, it's only going to be that much more difficult for Elmira.

March 24: Jackals vs. Trenton - I want to write here that the Titans have been beaten - badly - by the Jackals the last two times the sides have met, outscored 13-4 and dominated in every facet of the game, so they'll want to come out and extract some revenge in this game. But, then I'd just be ignorant. The fact is, and it's a harsh reality in sports, the Titans have checked out. They aren't going to the playoffs, they aren't even close to the discussion, and a lot of these guys are counting down to that final game so they can take off and head home. I've never seen a hockey team look more disinterested while simultaneously being beaten up on the scoreboard than I did with Trenton on Wednesday. These are two points literally sitting there for the Jackals to take. And, despite it being the end of a three-games-in-three-days stretch, I think the Jackals snatch them fairly easily.

March 27: Jackals at Wheeling - Ah, the Nailers. Everyone's favorite team welcomes in Elmira during the final week of the regular season, and by the time this game rolls around, the Nailers will either be within striking distance of a playoff spot, or mathematically eliminated from the Kelly Cup Playoffs. They currently sit ten points behind 8th place Toledo in the Eastern Conference standings, but have two games in hand on the Walleye, and could very easily be playing for their playoff lives by the time this game rolls around. The Jackals will enter this game having had the opportunity to rest after a brutal stretch of games over the weekend, but they'll need to re-focus for this game to get past Wheeling. In the last four meetings between the two teams, Elmira has won all four.

The good news is that Elmira is virtually a lock for the Kelly Cup Playoffs. The team is playing great hockey right now, and has only lost three times in their last nine games. They cannot win the division, as the Reading Royals locked up the Atlantic Division crown on Wednesday night (and the biggest reason they have such a big lead in the division is due in large part to a player no longer with the team in Philip Grubauer), but they can still get home ice for the first round. Elmira is dead-locked with Florida for fourth place in the East right now, with both teams sitting at 79 points with 66 games played. Last season, Florida stunned the Jackals in five games in the Eastern Conference Semifinals and upset top seeded Elmira en route to a Kelly Cup championship. There would be some great storylines if the two sides were to match up again, although I'm sure the powers that be at the ECHL offices wouldn't be too thrilled about those travel expenses. This weekend will probably be what ultimately decides whether or not the Jackals will be hitting the road to start the postseason, or staying in Elmira for the first couple games of their first round series. Fortunately for them, they are playing beatable teams who may not have a whole lot to play for, which should allow Elmira to get some points. See you next week!