The Senators' inability to finish is starting to catch up with them.

Is Bryzgalov a 97.1% save kind of goalie, or did the Senators just make him look like one in this game?

I'd like to think everyone knows the answer to that question, but I'll continue the recap anyway.

The first opportunity came, unfortunately, as the result of an injury to defenseman Mike Lundin, who had just gotten back into the lineup after missing games with the lingering remnants of the Aflie Flu. Lundin cut across the middle, and was absolutely destroyed by Flyers forward Harry Zolnierczyk:

I'm not going to get into debate on the hit too much here. Lundin is responsible for his awareness on the ice, but Zolnierczyk is also responsible for not unloading on a defenseless player. Regardless of whether you think it's a clean hit or not, the head was the point of contact, and Zolnierczyk should be suspended. That's what the rulebook says. Lundin was concussed on the hit, and would not return.

Zolnierczyk was ejected from the game and the Senators got a five-minute power play as a result. Instead of pouring in the goals, they took a penalty for too many men on the ice just 1:12 into the power play. Missed opportunity.

In fact, the Senators has five power play opportunities during the game and didn't convert any of them. Missed opportunities.

Still, it was merely a one-goal deficit, and the team started off the third period outshooting the Flyers 7-0. Something Flyers center Zac Rinaldo said must have pissed off the team, though, because they were after him all day. The Senators could not keep their cool around the guy, and though he only played 6:44 in the game, he drew a whopping 24 PIMs out of the opposition. I don't know the Flyers well enough to know if that's his role or not, but if it is, he played it to perfection.

Things came to a head when Rinaldo hit Chris Phillips along the boards and captain Daniel Alfredsson flipped out on him. Alfredsson was given a five-minute major, and asked to leave the game, and Phillips was assessed another two minutes for roughing, and the Flyers went on their own extended power play.

Rinaldo took the roughing penalty, so it was 4 on 4 for 2 minutes.

However, instead of taking their own too many men call, they actually drew a high-sticking call on Erik Condra, which meant they got a full two minutes of 5-on-3 time before finishing with 40 or so seconds more of 5-on-4. The Senators, to their credit, killed off the entire power play, picking up injuries to both Marc Methot and Peter Regin in the process. The latter had to walk it off in the locker room, but was able to return. Methot just took a puck in the ear and kept playing, because he's a badass.

Anyway, the game was still within reach even though there were slightly less than three minutes on the clock when Alfredsson's penalty expired. The team was able to get an offensive zone faceoff and pull Bishop when Chris Neil drew a penalty on Kimmo Timonen with 46 seconds left, leaving the Senators with a 6-on-4 advantage with the Flyers' defenseman in the box, and only needing one goal to tie the game.

Missed opportunities. Why do the Senators keep missing them? Here's a theory: the NHL is the most skilled league in the world. Here's a list of players who should be in the AHL this year, but can't be due to injuries: Mika Zibanejad, Dave Dziurzynski, Eric Gryba, Patrick Wiercioch, Andre Benoit, Derek Grant, Stephane Da Costa, and yes, Jakob Silfverberg. Here's a list of guys who started the season in the bottom six and are now regularly playing top six minutes: Peter Regin, Colin Greening, and Erik Condra.

The sky isn't falling because the Senators are living on the edge and came down on the wrong side in this game. Living on the edge is all you can ask of this group. Head coach Paul MacLean said he wasn't going to ask the team to change its game, but it's obvious that the strategy now--sans Erik Karlsson and Jason Spezza--is to rely on good goaltending to keep games close and try to punch in your chances when you can get them. Talent isn't the issue, experience is. This lineup could have beaten the Boston Bruins, and could have beaten the Flyers. They didn't because the stuff that works at other levels of hockey doesn't work in the NHL--and the only way to learn that is to experience it. You have to try a play and have it fail to really scratch it from your memory. There's a reason all of Silfverberg's shootout goals look the same. There's a reason Gryba keeps centering the puck in front of his own net. There's a reason Karlsson tried to shoot through seven people every time he had the puck in his rookie season, and Alfie had to play behind him so when the puck inevitably got blocked and ricocheted out of the zone, the team wouldn't be caught flat-footed on an odd-man rush.

Mistakes teach us what we can't or shouldn't do. When we find something that works, we tend to cling to it like a safety net. And when we finally try it and have it not work, we sit down, analyze what we could do differently next time, and then, hopefully, try that. That's what learning is. And that's what we're seeing with a team this inexperienced. So, chill.

You saw his numbers above. He gave the team a chance to win, yet again. There's not much else to say, really.

Scored his first goal in a Senators jersey, and led several rushes--which was good, because no one else felt like leading any rushes today.

Everyone's going to simply point out his extended goalless streak, but it certainly hasn't diminished Turris' effort level. He was the team's best center in the game, and went 9-of-16 in the faceoff circle. He also had a few scoring chances, and at least one missed opportunity to shoot. Guy just needs a slumpbuster. Or a Spezza return.

So, Greening goes in on a breakaway. Wiercioch was not involved, but Greening must have watched Kaspars Daugavins on Thursday, because instead of trying to deke, he opts to shoot. Of course, since he is Colin Greening, it doesn't go in, but he, like Daugavins, does not give up on the play. Instead, he retrieves the puck, fights off a check, finds some space, and a wide-open Methot. Methot nets an absolute softie of a goal, and Greening gets a gift assist.

His brain is writing cheques (CANADIAN SPELLING APPEASEMENT) his body can't cash. Regin is going all-out on the ice, which is great to see, because the Senators need that kind of effort if they're going to have a chance to win games. While I have my doubts about his ability to keep up this intensity level, he brought it tonight. Also, he got demolished in the faceoff circle, so that's not good.

With Lundin out early in the game, Gonchar picked up the extra minutes, leading all skaters with 28:23 on ice. Unfortunately, he didn't do much with it, registering just one shot, despite 5:08 on the power play. I don't want to pile on the guy now that I've outed my feelings about him, especially because it's extra-dumb to expect a 38-year-old to step up and be the focal point for any team--except that's the kind of minutes he's getting. Part of that is because there's literally no one else to take those minutes, but the bottom line is that he didn't do much with them in this one.

By my count, Gryba had 343 turnovers in this game. He was also culpable on the first goal, as he decided gettin' aggressive would be a good move with a skilled skater like Jakub Voracek. It was not. Voracek went around him like he wasn't even there-and Gryba doesn't have the foot speed to catch Voracek. WHOOPS, ERIC.

By my count Wiercioch had 343 power play shots in this game, and, as you know, the power play wasn't great. He was also culpable on the second goal, as he decided that trying to pinch around Wayne Simmonds while Erik Condra was going for the puck would be a good idea. It was not. Simmonds promptly moved the puck to Briere, open thanks to Condra's decision to engage, and took off down the right wing--and Wiercioch doesn't have the foot speed to catch Simmonds. WHOOPS, PATRICK.

It pains me to do this, but Alfie did not have a good game today. I only noticed him when he was turning over the puck, and though he sometimes had good possession during the power play, well--the power play would have to improve 100% to suck. The spazzout on Rinaldo sealed the deal, because that's not the kind of leadership the team needs from its captain in a game like this. Alfie's penalty took a huge chunk of time off the clock during which the Sens could not attempt to tie the game, and when they had a 6-on-4 late to end the game, Alfie wasn't available to help his teammates out. Come on, Alfie.

You don't think I'll beat a dead horse? The power play was, in fact, bad enough that it deserves this much mentioning. The Senators are not a high-scoring team. You think they can afford to miss chances to score goals? No, they can't. The power play has to keep them afloat until they get some reinforcements. It sure didn't today.

Too many men in the middle of a five-minute major? That's bush-league. Paul MacLean and his staff are reputed to be good communicators; they simply have to do a better job in situations like that. As mentioned hours ago (this is how you do a long recap, Peter) Rinaldo was able to get 24 PIMs with under 7 minutes of ice time. The Senators have to react better to frustrating situations, and that's where having a coach like MacLean can make a difference. Back rubs for everyone! 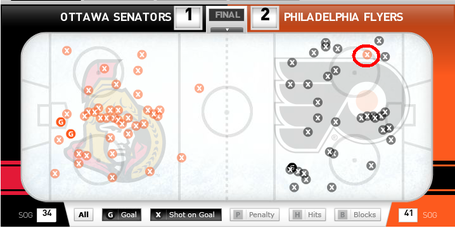 For your amusement, I have highlighted the Flyers' "shot" that was really just a clearing attempt that happened to trickle onto Bishop's stick.

Are not available yet. That's as ridiculous as everything else about this one.

The Sens play tomorrow, so there's not even any time to dwell on this one!