Ottawa Senators fight back to win 5-3 over Islanders

Although they didn't play well all game and suffered yet another significant injury, the pesky Ottawa Senators somehow managed to fight back from a two-goal deficit to beat the New York Islanders by a 5-3 score.

Share All sharing options for: Ottawa Senators fight back to win 5-3 over Islanders

Chalk this one up as a game the team was pretty fortunate to win, but points are points and the Ottawa Senators put two of them in the bank with their 5-3 win over the New York Islanders on Tuesday night.

Aside from a tough first shift, the Sens carried much of the play in the first frame, culminating in Matt Kassian's first goal with Ottawa when he tipped in Sergei Gonchar's point shot. Late in the first Keith Aucoin scored a weak five-hole goal on Ben Bishop, though, and the teams were squared at aces after one.

The second was almost all Long Island, as they scored two goals (Josh Bailey just 14 seconds into the period and Lubomir Visnovsy a little later on the powerplay) and out-shot Ottawa by a 12-7 margin. Also early in that period, another man went down for the Sens when Marc Methot went into the boards awkwardly and appeared to suffer a knee injury.

And then, as a wise man once said, "weirdness happened." Jakob Silfverberg tipped in Patrick Wiercioch's point shot early in the third to get Ottawa within one, and just over a minute later Zack Smith took advantage of some "lazy Susan" play by Evgeni Nabokov to tie the game at three. It appeared that Aucoin scored his second of the game to restore New York's lead, but it was disallowed when reviewers saw a distinct kicking motion putting it in. The teams played a tight game for the rest of the period and it looked like another Sens game headed to extra time, but then Gonchar fired a pinball shot off a few players and, somehow or other, past Nabokov and into the net. An empty-netter by Latendresse (Milestone Alert!) later, the Sens left Long Island with a 5-3 win and a bucketload of confidence.

Sens Hero: Sergei Gonchar
Gonchar looks like he's about 25 years old right now, and he's leading the way offensively and defensively for the Ottawa Senators. It's right out of left field, but this level of play couldn't have come along at a better time. With three points (1G, 2A) and a plus-five rating, Gonchar now has 13P (1G, 12A) during his eight-game point streak, and Dave's question from Tuesday's Silver Nuggets was prescient: Should the Sens bring this guy back for another year or two?

Sens Hero: Patrick Wiercioch
The growth of Patrick Wiercioch stepped forward once again against the Islanders, and--from a Sens fan perspective, at least--it's even more exciting than Gonchar's outstanding play. Another three assists from Wiercioch give him 14P (4G, 10A) on the season, which is tied for fifth in scoring among rookies--despite the fact that he's playing less per game than other rookies, especially on the powerplay. An offensive blue-line unit featuring Erik Karlsson and Wiercioch has me pretty excited for next season.

Another Milestone: Daniel Alfredsson
Overall Alfie had good moments and bad moments in the game, but he had a pretty special moment when Guillaume Latendresse scored the empty-netter to salt away the win: With the assist, Alfredsson scored his 1100th regular season NHL point. In the process he passed Glenn Anderson in all-time scoring to take sole possession of 57th place all-time.

Sens Killer: Referees
It was an awful game for the refs. The Senators deserved a few of the penalties received, certainly, but a couple notable ones were total garbage calls--and they could have been costly, too, if not for Ottawa's resiliency.

Honourable Mention: Matt Kassian
Although he played just 3:39 in the game, Kassian got his first goal with Ottawa to give the Sens an early 1-0 lead. He now averages one goal in every 14:17 played, making him the most efficient goal scorer on the roster.

Payback Time: Ben Bishop
There have been a couple of games this season when the Sens lost despite Bishop's best efforts. On Tuesday, they won despite one of his worst. He'd probably want a mulligan on at least two of the goals, but what goes around comes around and that worked out nicely for Bishop against the Isles. 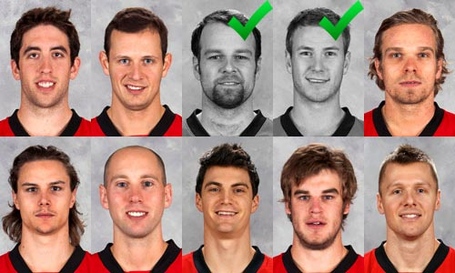 For now, Methot's injury is classified as a lower-body ailment, and he's day-to-day. Although the exact diagnosis wasn't revealed in the post-game press conferences, we should get more information tomorrow. For what it's worth, Ian Mendes tweeted just after the game that it wasn't expected to be too serious.

See all those shots from the left point? Pretty sweet.