Share All sharing options for: Ottawa Senators dominate the Winnipeg Jets in 4-1 win

It was the best Ottawa performance since the Erik Karlsson injury, with the Senators defeating the Winnipeg Jets 4-1 on Sunday. It didn't take long for Ottawa to get on the board on Guillaume Latendreese's second goal of the season that deflected off him on Daniel Alfredsson's driving towards the net. I've watched the replay many times and I still can't see where that touched Latendresse but apparently it did. The Senators would completely dominate the period and late in the period would extend their lead to 2-0 on the power play. Sergei Gonchar would make a beautiful pass across the ice to Jakob Silfverberg, who had the presence of mind to settle the puck down, pick his spot and fire it into the top corner. The shots were 19-6 Ottawa and that by no way flattered the Senators. It was complete domination.

The Jets would get on the board early in the third on Zach Bogosian's point shot that Lehner was unable to see or stop. For all of Ottawa's dominance it was now a one-goal game. With 12 minutes left, Lehner would be knocked down after getting hit in the head by the arm of Dustin Byfuglien. He would eventually get up and Byfuglien received two minutes for goaltender interference. On the ensuing power play, despite winning the face-off, Ottawa wouldn't be able to control the puck and Evander Kane simply took the puck and blew by the Senators defence for a breakaway. Robin Lehner hasn't been exactly great at stopping breakaways recently, but fortunately Kane would shoot it high. Later on the same power play, Kane would get another shorthanded chance to tie the game but this time Lehner would slide across the crease and make an incredible pad save to keep Ottawa in front.

Shortly after that, on another power play, the Senators would score a stunning goal. Patrick Wiercioch would keep the puck in at the right point and pass it to Gonchar on the left point. Gonchar passed it to Alfredsson on the right face-off circle and Alredsson passed it to Kyle Turris in the left face-off circle. Turris was waiting with his stick in the air, similar to the overtime winner in Buffalo, and he blasted it into the net. Right after that, Silfverberg would skate in a circle and fire it into the top corner from the left side to make it a 4-1 game.

That would be the end of scoring and the final score would be 4-1 for Ottawa. The final shots were 42-26 for Ottawa. As you might imagine, there were no zeroes in that game, but here are the heroes.

Sens Hero: Sergei Gonchar
What a roll he is on? With his two assists he is now on a seven-game assist streak, totalling 10 of them in the span. He played over 26 minutes, almost four minutes more than any other skater for Ottawa. He is the best defenceman on the club right now. The pass for the 2-0 goal was a thing of beauty and he knows it. 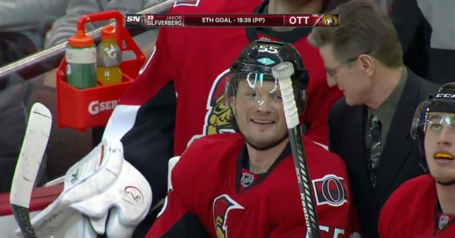 Silfverberg had two goals and both of them were his trademark top corner shots. It really is amazing to watch him shoot the puck. He amazed us six times. Aside from that, he played 19:17 which was his fourth highest total of the season, and the highest in a game that did not go to overtime. The ice time included 2:16 of penalty kill time, in which he was very effective, the most memorable work being his holding of the puck against the boards in the offensive against three Winnipeg players.

Sens Hero: Robin Lehner
He wasn't tested in the first period, but didn't give up a bad goal either. He came up big in the second and the third period and ended up stopping 25 out of 26 shots. His save percentage for the season is 94.6% and he hasn't been under 93.3% in any of his six games this year.

The Jets logo is missing and I don't know why. Ottawa is shooting on the left side of this chart.