It was the team's 11th consecutive one-goal game, but there was no shootout this time.

Share All sharing options for: Senators emerge with 4-3 OT win over Sabres

Ottawa didn't need Ben Bishop's sterling shootout record as they were able to put away Buffalo in overtime thanks to a Christian Ehrhoff penalty in overtime.

It was an adventure getting there, though. The Senators were apparently using Craig Anderson's alarm clock for this game as they opened the game with absolutely no jump whatsoever. Even Bishop wasn't fully focused, and the Sabres took full advantage. Before the period was even 10 minutes old, Mike Weber had been able to float a puck by Bishop, and Drew Stafford pushed home a loose puck just sitting there in the crease. Neither Bishop, Sergei Gonchar, nor Marc Methot were able to find the puck--but I watched the replay and it was not camouflaged.

Thankfully, the second period was a much different story, and the Senators unleashed a three-goal barrage to take the lead in the game. Thinly-veiled Sens Hero Patrick Wiercioch got things started with a shot that beat Sabres goalie Ryan Miller thanks to a great screen by thinly-veiled Sens Hero Daniel Alfredsson. Thinly-veiled Sens Hero Kyle Turris did most of the heavy lifting on the goal, twice keeping the puck in the zone before finally turning it over inside the offensive zone. But the turnover wasn't clean, and Gonchar scooped it up and put the puck right on the blade of the wide-open Wiercioch.

Ottawa had all the momentum at that point. When the second goal came, the Sens were outshooting the Sabres 11-2 in the period. Some strong board work by Zack Smith led to an offensive zone faceoff, thanks to a wrestling match between Chris Neil and Weber. Peter Regin was kicked out of the circle on the ensuing faceoff for putting his stick on the ice first (Seriously. I just watched a replay of this.) and gave the linesman the old "WTF glove" but Jim O`Brien came in to win the only faceoff he would in four tries. It was a clean draw right back to Chris Phillips, whose shot not only changed direction, but altitude as well. Miller could only wave at it as it went by him into the net.

Turris finshed off the scoring in the period as the center simply decided to score. Upon entering the zone, he dropped a pass to Guillame Latendresse, and Latendresse returned it immediately. Turris used the momentum--he hadn't slowed down at all--to whip around the net and beat Miller to the far post. As a result, the puck deflected off of the goalie's skate into the net.

The period ended with Chris Neil pummeling Sabres winger Robyn Regehr as a result of Neil's repeated running around in the period. Neil led the Senators with five hits and was very, very effective in his role today. Regehr had had enough, but it was a game where Neil wasn't going to back down from anything. Does Robin Lehner approve of not taking shit from anyone? 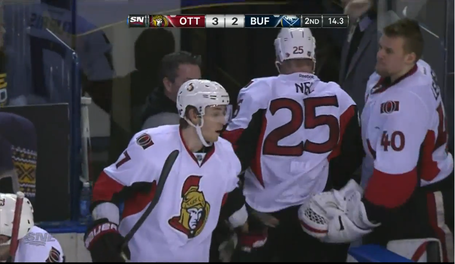 The third period saw the Sabres take momentum back, with the home team outshooting the Senators 13-6. That's usually not a good formula for preserving a lead. The Sabres accumulated shots but were unable to beat Bishop, who had performed very solidly since the first period.

Then... weirdness happened. Drew Stafford fired in a wrist shot that deflected off of Z. Smith's blade, fluttering past Bishop on a new course. Bishop had turned over the puck to start the sequence and was wobbly on his skates to get set for the shot, but I'm not sure how he could have saved a deflection like that. Bishop's body language, however, did not agree: 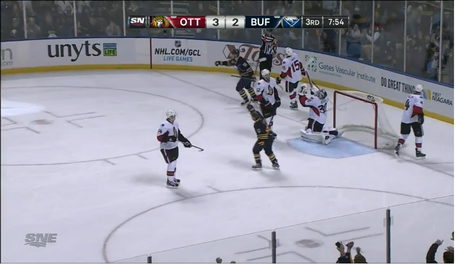 He may want that one back. I'm not sure.

Anyway, it was all right, because everyone knew this game was going to a shootout anyway.

In overtime, where penalties usually aren't called, Mika Zibanejad worked the puck out of the corner in his own zone, used the boards to pass it to himself once to get around one player, and then used the same move again to pass it to himself again as he went around Ehrhoff. Ehrhoff proceeded to hook Zibanejad in front of one of the referees so clearly that a call had to be made. What's stranger is that there was no reason for him to do it. His partner, the illiterate Tyler Myers, had position and an angle on Zibanejad to prevent a breakaway. But it happened, and the Senators went on to the power play, where they put together one of the most putrid displays of puck movement you will ever see. It was a 4-on-3 and the Sabres penalty killers were able to stay out there for the entire time because they did not have to skate. At all. The PK required them to stand still. No joke.

Turris, as you know if you actually took the time to read all that, has done nothing on this power play except retrieve the puck and pass it to Alfredsson, so there's no reason for any Sabres defender to move into his lane. Miller moves over to take on the shot, but it's a laser-perfect one-timer over the right shoulder--about as perfect as you can ask a shooter to be. Sens win. Sens win. And either that was a 1:37 of the most masterful decoy setup I've ever seen or the Senators should try to be a little more active with that much space to work with.

Even if he hadn't scored the game winner, even if he hadn't had two goals and an assist on the night, Turris would have gotten a hero from me. Turris was completely dedicated to winning puck battles in this game, and the amount of times he came off the boards with the puck or simply accelerated around someone was really noticeable. Moreover, he was noticeable breaking up plays on the backcheck as well. I mention this because this is the same way Turris had been playing for most of his slump. The primary difference is that points are coming again, as they typically do when effort is there.

Maybe it was just the Sabres showing Alfie some respect considering his history against the team. Or maybe Alfie Blood really is a performance-enhancing drug. But the captain seemed free to do whatever he wanted out there in this one, and it was a joy to watch. He looked like he could play another 10 years, stealing pucks, curling wherever he felt like, pinpointing passes, and ripping shots--he was tied for the team lead with 4. Alfie also rang a shot off the crossbar early in the second, which seemed to give the team a lift. He just had one assist, but he was a leader out there.

P Dubs had a rough call late in the game to make it a nail-biter, but the kid now has four goals in his last six games. He also assisted on Turris' first goal, Wiercioch continues to play sheltered minutes, but not unlike Erik Karlsson last year, he's being put into positions where he can be most effective without being a liability to the team. Obviously those situations are far fewer for Karlsson, but on a team that needs offense from anywhere they can get it, he's contributing. Of all the defensemen that played in this game, Wiercioch had the biggest impact.

Bishop had an... interesting game, but the bottom line is he gave his team a chance to win. He blanked the Sabres in the second period to let the Senators get back into the game, and stood tall in overtime to let the team get a chance to win it. His .917 save percentage in the game was below Ottawa's typical astronomical standards this season, but he made the saves he needed to make. Bottom line: Bishop wasn't perfect, but he was good enough to win. This wasn't an "in spite of" game from him, it just wasn't his best.

He played a very similar game to Turris, but wasn't in a position to get points, as he played alongside Neil and Colin Greening in a checking role for most of the game. That's totally okay. His work eventually led to the overtime goal, and before that he had a great chance to help end it himself, floating a pass to Erik Condra, but Condra was unable to tip it in. Z. Smith was also 12 of 18 on faceoffs.

Regin was the team's best faceoff man in the game, winning 8 of 10--what shoulder weakness? He was also a part of a huge glut of scoring chances with Jakob Silfverberg in a four-shot sequence. Most importantly, he was strong on the penalty kill, which was hugely necessary with Kaspars Daugavins out of the lineup.

Kassassin's Creed: Matt Kassian had eight shifts for a total TOI of 3:21. We should withhold judgement after just one game, but it doesn't look like he's going to be an integral part of the team's plans going forward.