Despite a 10-game suspension keeping him out of the World Juniors and decreased offensive production, Stefan Noesen is still one of Ottawa's most highly-regarded prospects, so much so that he even made a surprise appearance at the Senators' abbreviated 2013 training camp.

When he was picked 21st-overall in 2011 by the Ottawa Senators, Stefan Noesen had come off a quite successful season. Having scored only three goals in 33 games in 2009-10, Noesen put up 34 in 68 games the following year (a real case of capital gains for the Plymouth Whalers). Noesen was the second of three first-round picks that year for Ottawa along with Mika Zibanejad and Matt Puempel, but he's often felt like the throw-in alongside Puempel's pure goal-scoring and Zibanejad's flashy game (and even flashier hair).

Put any of that inadequacy behind, because Stefan Noesen is the 10th-best Senator under the age of 25. 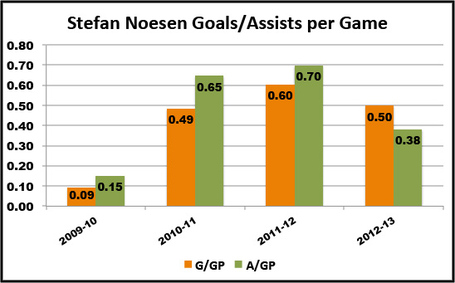 While Noesen's overall point production is down, his goal scoring (orange bars) has been relatively stable compared to the last few seasons. During his draft year in 2010-11, Noesen averaged 0.49 goals/game. The following season he was scoring at a 0.60 goals/game rate. And while this season he's down to 0.50 goals/game again, it's still overall very consistent with his earlier numbers. 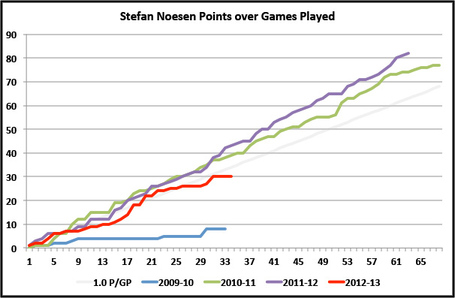 Looking at his point-over-season rates throughout his OHL career, Noesen was actually on roughly equal pace to his previous two seasons until the seventh game of 2012-13. Then production slowed down. He was hanging at a full point-per-game at the time of his suspension, but in the eight games following it he's only tallied four points - none of which were goals.

What does this mean? Ultimately, not much. Players go through on years and off years all the time, and the Senators were obviously impressed enough to invite him to training camp, even though they stated right from the beginning that Noesen wouldn't be making the team.

Noesen's abilities as both a grinder and scorer make him the perfect candidate to play on the third line and climb up the depth chart when injuries inevitably hit. His style can fit both checking and scoring roles. This is exactly what every team needs: versatility.

If he doesn't make the Senators in 2013-14, look for Stefan Noesen to definitely make a push in training camp and earn a call up or two as the season goes forward.