If you want to watch out of market games on your computer, this is probably your best/only legal source.

Two years ago, I reviewed NHL GameCenter Live, and now seems like as good a time as any to revisit the product and provide another review. And even though I received a free copy of GameCenter Live from the NHL, that won't influence my review whatsoever.

For those unaware, NHL GameCenter Live is the NHL's live streaming product that allows fans to watch out of market games on a variety of devices: PC, smartphone, XBox 360, PS3, Apple TV, etc. The key phrase here is "out of market games" -- fans in Ottawa will not be able to watch a single Ottawa Senators game on GameCenter Live. They will be blacked out because you have access to Sportsnet East, TSN, TSN2, and CBC.

However, for Senators fans living outside of Ottawa (like me), it certainly comes in handy. Sure, TSN, TSN2, and CBC games are blacked out for me, but the majority of Senators games are on Sportsnet, so the majority are on GameCenter Live.

GameCenter Live looks like this (with a few notes from yours truly): 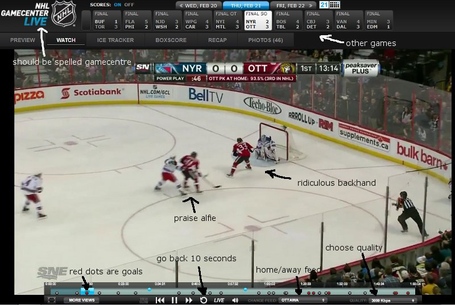 It's a pretty intuitive interface. It tells you of major events, so if you show up for the second period you can quickly watch a goal highlight between whistles and then go back to live streaming. If you miss something that happens, or you want to go back quickly to watch Z. Smith taunt Nazem Kadri over and over again, it's as simple as pushing the "Go Back 10 Seconds" button.

The streaming quality is very good, even on high definition monitors or TV screens. The product also runs very smoothly on a variety of computers, and I was able to watch a game without issue on my girlfriend's nearly 10 year old Toshiba laptop that can't run Netflix without losing audio sync within seconds. Having access to both Home and Away feeds for every game means you never have to listen to Jack Edwards, which is a huge plus in my books, too.

The portability of GameCenter Live is one of its best features, as you can sign in from wherever you are and watch games. I occasionally have to travel for work, so being able to watch online wherever I am is a nice feature -- something I would not have if I used Center Ice. The option of watching games on other devices is great, and I have watched bits and pieces on my Android phone and it looked very good, the only problem being that the game seemed to pause itself during commercial breaks.

As you can see, I mostly find positives with GameCenter Live, but it's not without its problems: